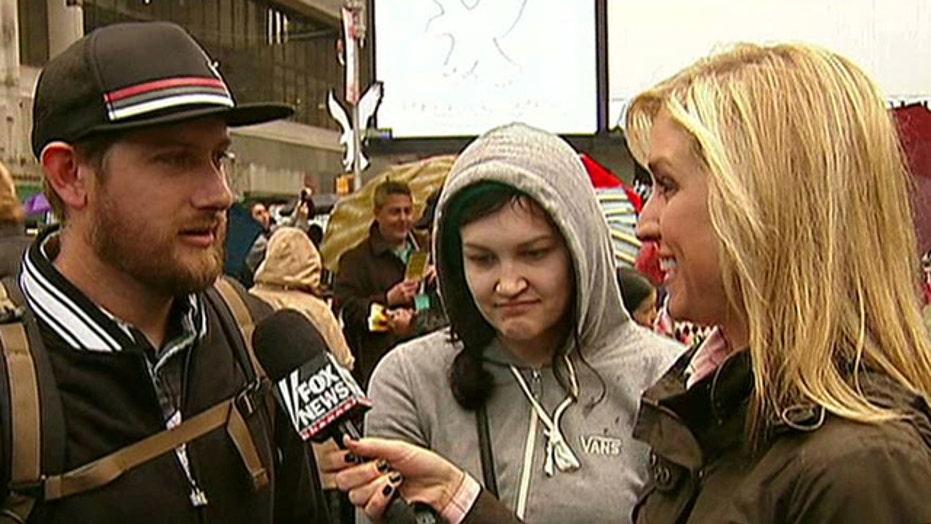 Where is your tax money going?

This is a rush transcript from "Hannity," April 15, 2014. This copy may not be in its final form and may be updated.

So we have to ask ourselves, where's all that money going?

Now, earlier today, we sent the co-host of "Fox & Friends," our good friend, Ainsley Earhardt, out to see what people think about how much cash is being taken out of their wallets. Take a look.

AINSLEY EARHARDT, CO-HOST, "FOX & FRIENDS FIRST": Do you think that the rich are paying their fair share?

UNIDENTIFIED MALE: No, probably not.

UNIDENTIFIED FEMALE: I do not think the rich pay their fair share in taxes, no.

EARHARDT: CEO of Liberty Tax Service. We're asking people, do you think the rich are paying their fair share?

UNIDENTIFIED MALE: I think the rich are paying their fair share, yes.

EARHARDT: How much do you think they should be paying?

UNIDENTIFIED MALE: Same as the rest of us.

EARHARDT: They're paying 71 percent of our federal income tax. Is that -- are they paying their fair share?

UNIDENTIFIED MALE: After seeing that, I'm assuming we are. Yes, we are.

EARHARDT: Seventy-one percent, what's in blue here, that is all paid by the top 10 percent income earners.

EARHARDT: Does that shock you?

EARHARDT: No, you think they should be paying more?

EARHARDT: Does that change your mind now?

UNIDENTIFIED MALE: At least they're paying -- apparently, most of it.

UNIDENTIFIED MALE: We think they do. They're probably paying majority of the taxes in America.

UNIDENTIFIED MALE: I think that a lot of people get blown away by how much money they can have and they'll die and they'll have all this money, and I think that there's a lot more important things in life than money.

UNIDENTIFIED MALE: I want there to be incentives for people to aspire to wealth because I think that helps all of us prosper.

HANNITY: All right, Ainsley's here with much more. Interesting. A lot of -- oh, they don't pay their fair share -- did you change their minds?

EARHARDT: I think I did! Several of them were shocked when they saw the statistics because we mapped it -- we showed them that chart.

HANNITY: The bottom 50 percent pay next to nothing.

HANNITY: I'd like to move Tax Day to Election Day because a lot of people now are finishing their taxes, they just sent it in, getting it postmarked right now.

EARHARDT: You think people would vote a different way.

HANNITY: I think -- I think it would impact elections. I really do.

EARHARDT: Well, everyone in the country has seen our taxes go up this year. The average person is seeing an increase of 1.8 percent. And I'm reading a lot of articles about this over the course of the last few days, and many of them are saying this is the result of the fiscal cliff debate, saying that there's a bump in the top ordinary income rate. The top income earners were paying 35 percent. Now they're paying 39.6 percent, a new limit on itemized deductions, an increase in top rate on investment incomes. So we're all feeling the burden of this.

And in 2014, this year, the Heritage tax expert Curtis Dubay (ph) is his name -- he says that there were 13 different tax increase this year...

EARHARDT: ... and six of them are attached to ObamaCare.

HANNITY: One of them -- yes, I was going to say, ObamaCare, big part it.

EARHARDT: Six of them, he says.

EARHARDT: OK. Happy Tax Day! It was a dreary day out there, raining...

HANNITY: You got wet for the team.

EARHARDT: Hey, it's Tax Day. It had to be raining, right?

Now, earlier today, the co-founder of the Tea Party Patriots, Jenny Beth Martin, she helped demonstrate -- we went to the "Hannity" big board -- just how unfair and unbalanced America's tax code really is. Take a look at this.

HANNITY: And Jenny Beth Martin, Tea Party Patriots, is with us, of which I am a proud member, and we are partners in radio. So it's good to see you.

JENNY BETH MARTIN, TEA PARTY PATRIOTS: So 71 percent of the taxes that are paid are paid by the income earners who earn 10 percent...

OK. Now, then we have -- explain the second part. This is the red here.

HANNITY: This is what, the bottom 50 percent, because you always say income inequality, pay your fair share. The bottom 50 percent of wage earners pay this, I can almost fill it in in one line. There you go. That's what they pay.

All right, so, let's move on. One of the questions that always comes up, the percentage of Americans that pay no income tax. This is a huge number because we're dealing with half the country that is paying zero and many of those are also getting government benefits.

MARTIN: They are. And, Sean, you know, when we're looking at these charts and we see this number and we look at the previous charts, I just keeping thinking of this the government gets all of this tax money from so many people and yet they are still borrowing so much money and we have a $17 trillion debt.

HANNITY: And $90 trillion in unfunded liabilities.

HANNITY: What do you think the impact is, because Barack Obama when he was running for office said that George Bush, $9 trillion in debt was irresponsible and unpatriotic. He will himself accumulate more debt than every other president before him combined.

MARTIN: Combined. He is continuing to spend that money. We have a Congress that is continuing to spend that money. And they are not doing what is necessary to actually balance the budget. They want to balance the budget in 10 years from now rather than addressing the problems right now. At Tea Party Patriots we support a simple plan to address this. Simply reduce the government spending by one penny for every dollar.

HANNITY: You and I support the same thing. It's the penny plan. You've got one penny out of every dollar for every dollar the government spends, and you do it every year for six years we get to a balanced budget because the economy grows.

Jenny Beth Martin, always good to see you, appreciate it.