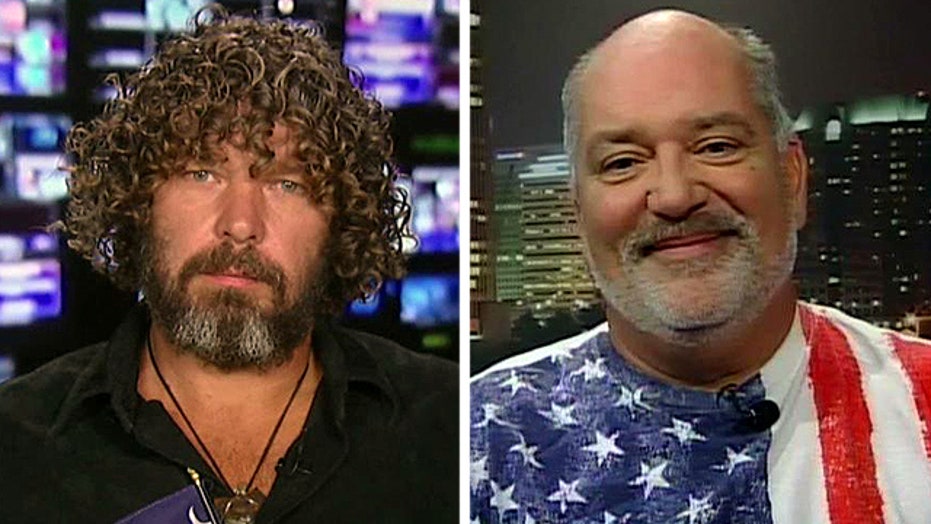 This is a rush transcript from "The Kelly File," October 10, 2013. This copy may not be in its final form and may be updated.

MEGYN KELLY, HOST: A lot of Americans are outraged at what is happening to this country -- military members being used as pawns, sacred monuments being closed to the very men they honor. One man who's had enough is joining a big rig protest by hundreds, perhaps thousands of truckers in D.C. tomorrow. Another has launched a one-man effort to pay respect to our fallen heroes when others cannot or won't.

Trucker Ernest Lee joins me now along with Chris Cox, the guy has come to be known as the lawn mower man, which I love. Chris is on the left. Ernest is on the right. Ernest, let me start with you because you're part of this trucker protest that's happening in D.C. tomorrow and the goal of that is what?

ERNEST LEE, COORDINATOR, INDEPENDENT TRUCKERS: Well, the goal Megyn, number one, it's a pleasure to be here. Thank you for having me on. And the goal of RidefortheConstitutional.org -- and by the way, that's someplace you can go for absolute up to the minute live coverage right from the middle of this protest through the weekend, ridefortheConstitutional.org. What we hope to accomplish, Megyn, is to get the attention of our un- representing representatives in Washington, D.C. to let them know we, the people, have had enough.

The government is too big, too intrusive. Too many regulations, too many departments. It is weighing down everything in this country. Every problem in this country, none of them can be fixed by government, Megyn, because the government has caused them all, and we have had enough. And we are joining together, not just in D.C. -- we are looking for an Egypt-type moment here. Not with just 30 to 35 million people but from coast to coast over 100 million people getting together, getting out on the road or just staying home and not spending money for three days.

Lots of different ways we have to approach to come together causing the world's biggest traffic jam. I know D.C. is the focus. But this is an Egypt moment for the country to say, we have had enough. The federal government needs to go back inside the framework of the original Constitution.

KELLY: You certainly going to get people's attention by clogging up the streets of D.C. that's going to cause people sit up and take notice.

And Chris, you are somebody, regular American guy walking around D.C. seeing these monuments, seeing these barricades, seeing, you know, they're not being maintained, there's trash on the ground, the lawn's over grown. And you decided to do something about it. What made you pick up your lawnmower, start picking up trash?

CHRIS COX, CLEANING UP NATIONAL MEMORIALS: Well, Megyn, first of all, I'm flattered to be here. Thank you very much. And to answer your question, I set out to prevent headline news, I didn't set out to make headline news. And my goal was to fortify the boundaries. First it was to play a security role. It evolved into a janitorial role, if you will. Once the trash cans started spilling over, I was embarrassed. And I didn't want our nation's capital to be showcased in newspapers around the world with trash pouring out of the bins, pictures of veterans rolling over tobacco spit cups and half eaten bananas, and you name it, it was out there.

And I have had several volunteers show up and now after today, I have word that people are coming in as far as California, Texas, Nevada, Oregon, Florida, are coming to stand with me. And I am encouraging all Americans to go out and find a memorial or a park near your home but don't show up with a picnic basket. Show up with a rake and a broom, a track bag and do your part to stand with the park service. Because now more than ever they need our help.

COX: Thank you, Megyn. I think we should take away all the limousines and we should pick them up in a bunch of little short yellow buses. Thanks for having me here.

KELLY: Ernest, a quick last word from you as well. LEE: Last word from me would be take and unite together. Join the fight. We the people can rise up and do this and get the attention of D.C. and let them know we have had enough.

KELLY: I love that shirt.

KELLY: All right, guys. Thanks for being here. All the best.

KELLY: And while these guys decided to do something, they decided to do something. So refreshing, isn't it? They didn't sit around complaining. You imagine walking by the dirty trash, and actually stopping and getting hundreds of garbage bags and cleaning it up like he did? They are not alone in their frustration, as you know.