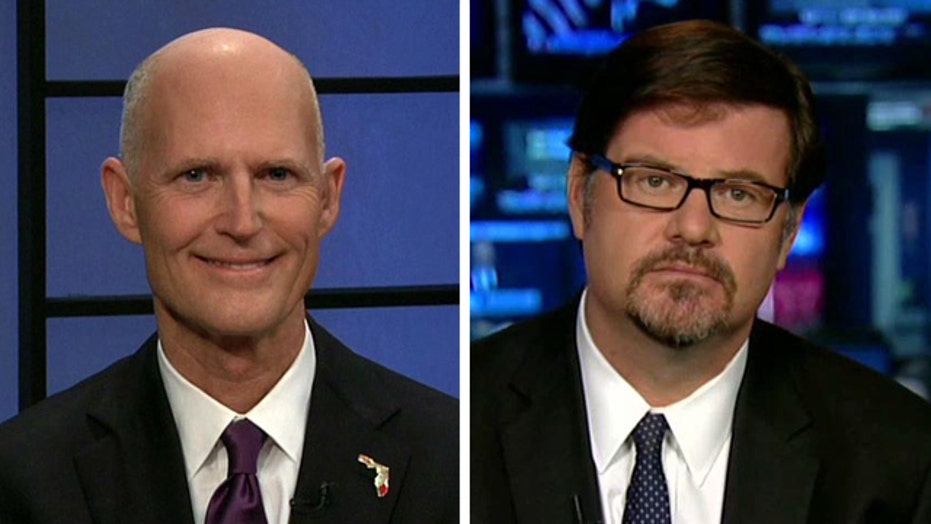 Gov. Rick Scott, Jonah Goldberg on why other states are thriving

This is a rush transcript from "Hannity," January 23, 2014. This copy may not be in its final form and may be updated.

SEAN HANNITY, HOST: And welcome back to "Hannity." So after New York Governor Andrew Cuomo revealed his true colors last Friday when he said conservatives like me have no place in the united socialist state of New York, well, I told the governor, I have no problem. When time is right, next couple years, I'll be moving out. And one of the states that I and lots of Americans are considering fleeing to, where unemployment rate happens to be lower than the national jobless rate, no state income tax, water, warm weather, is beautiful Florida.

Joining me now, the governor of the Sunshine State, Republican Rick Scott. Governor, good to see you. How are you?

GOV. RICK SCOTT, R-FLA.: Sean, come on down. Look at our weather. You probably have to have a jacket today. We're in short sleeves -- the fishing capital of the world, no income tax...

HANNITY: I caught 20 fish and a shark the last time I was down there.

SCOTT: So you know, was it fun? Did you have a good time?

HANNITY: Yes, I had a great time.

You know, on a serious note, if there can be one here, to me, this has provided a much bigger opportunity to compare and contrast. There's governors like yourself -- I've spoken to you, I've spoken -- I spoke to the lieutenant governor of North Carolina today, the governor, lieutenant governor of Texas Here you get to see 10 percent state income tax for me in New York, no state income tax in Florida. Let me put up on the screen -- your unemployment rate when you took office, correct me if I'm wrong, was 11.1 percent. Now it's down to 6.4 percent, which is well below the national average. You know, New Jersey, for example, they lost $70 billion in household wealth.

What is happening in states that have historically been run by liberals and states where there are no income tax? Why -- why is there such a disparity?

SCOTT: Well, look, here, you know, you get to keep your money. You get a big pay raise by coming down here. The weather's better. We love people. We have all these national treasures. We've got great lakes, rivers, beaches.

People are moving their businesses here because they can solve their customer needs better, lower income taxes, less regulation, faster permitting time. All these things mean we're going to have more business.

Approximately $100 billion of annual income has moved to our state in the last 20 years, $100 billion. That's bigger than our state budget.

And you know what? Sean, New York state budget is almost double ours for the same number of people.

SCOTT: Why would -- why would New Yorkers pay for -- why -- why would they pay that? Come down here, get a pay raise and enjoy our great weather.

HANNITY: All right, so I looked at the latest Census that we had. Do you know that 3.5 million New Yorkers left New York? And I put up the figure about New Jersey, 70 billion left in a four-year period in terms of wealth.

Why are most of those people -- how many people came to Florida in that time, do you know?

I have 285,000 job openings in the state right now, 285,000, unemployment down to 6.4 percent, below the national average. So we have businesses coming here. We're the gateway to Latin America. And you know what? We love people. This is a place where we're at a 42-and-a-half-year low in our crime rate. We just love people coming down here.

HANNITY: And you don't care that I'm pro-life and that I believe in the Second Amendment and that I have Barack Obama's view on marriage from two years ago? That' OK with you?

Governor, congratulations. And if you have 280,000 jobs available, that unemployment rate's going lower. I look forward to hearing that story. Thanks for being with us.

SCOTT: All right, nice seeing you. Come on down, one-way ticket to Florida.

HANNITY: All right. Appreciate it.

And joining me now to tell us why the left is so intolerant of anyone they happen to disagree with, author of New York Times best-selling book "Liberal Fascism," National Review editor-at-large Jonah Goldberg is back with us.

Jonah, before I get to anything else, let me play for you -- our good friend Kerry Pickett at Breitbart actually had a chance to talk to the new mayor of New York, Comrade De Blasio, and asked him what he thought about Governor Cuomo's comments. Listen to this.

HANNITY: He agrees with all those remarks, doubles down on it. What should a person take out of that?

JONAH GOLDBERG, NATIONAL REVIEW: Well, first of all, it's good to be back on the show. You know, de Blasio is -- actually, he's way to the left of Andrew Cuomo. In some ways, I wouldn't have been surprised if he called Cuomo an extremist. You know, he's basically a Jacobin. And what he is trying to do in New York, as far as I can tell, the New York City that I grew up in, is he's trying to go back to the wonderful years of the 1970s, where, you know, New York put out movies like "Death Wish" and "The French Connection," which he's nostalgic for.

And you know, I don't think he's going to destroy the city overnight. But then again, you know, Rome wasn't burned in a day, either. Sometimes it takes a little time.

In terms of the intolerance, look, I mean, we know this. I mean, you know this as well as anybody. The left these days defines tolerance as being incredibly warm and receptive to people who completely agree with them already. You know, that diversity is to have lots of people who come in lots of different shapes and sizes and colors and sexual orientations, but they have to all agree on the same things.

HANNITY: Yes, well, that's really well said. But -- and I don't want to interrupt you.

HANNITY: But let me -- let me ask this question, because it's very interesting, as you watch this. I just had Governor Scott on. I talked to Governor Perry. I've talked to Lieutenant Governor Dewhurst of Texas. Look at the difference between the states. Why aren't the Republicans in Congress advancing that solution-oriented positive growth agenda with a passion like -- considering the success of all these governors?

GOLDBERG: You know, it's a great question. It's kind of a mystery to me, too, some days. You know, something like close to half of the net jobs created since Obama has been in office have all been created in Texas. I always like to, you know, wonder why, if he's creating all these jobs, is he putting them in George Bush's Texas.

And I think that part of the problem is, you know, Republicans are doing really well at the state level, with the statehouses, with governors. And I think and part of that has to do with a psychological thing. People understand at the state level it's their money. They want to know where the tax dollars are going because it's going to their schools, their businesses, their roads.

But when you get to the national level, so much about taxation and spending is all this sort of theoretical stuff. People lose sight of the fact that it's their money, too, at the national level, and it becomes this vision thing about what the government can do for everybody and how it can solve all of our problems, and everyone thinks that spending someone else's money, or that there's such a thing as government money. There is no such thing as government money. It's all taxpayer money.

HANNITY: Yes. Well said. I think the D.C. Republicans have a thing or two they can learn from these governors and stop being so timid and thinking they're going to ride the problems of ObamaCare until to election in 2014. That's not going to help the country solve our problems, is it?

GOLDBERG: No. Look, I certainly think ObamaCare is a good issue for Republicans and they should not let go of it, but they also need to sort of borrow from people like Bobby Jindal and -- and Rick Perry...

GOLDBERG: ... and these guys -- and Scott Walker, for sure, you know, people who -- politicians who have -- first of all, have run things, and then second of all, are figuring out ways to address the felt needs of their constituencies. And so it's not just going against ObamaCare, it's actually trying to figure out how you replace it.

HANNITY: Jonah, good to see you. Thanks for coming back. Appreciate it.