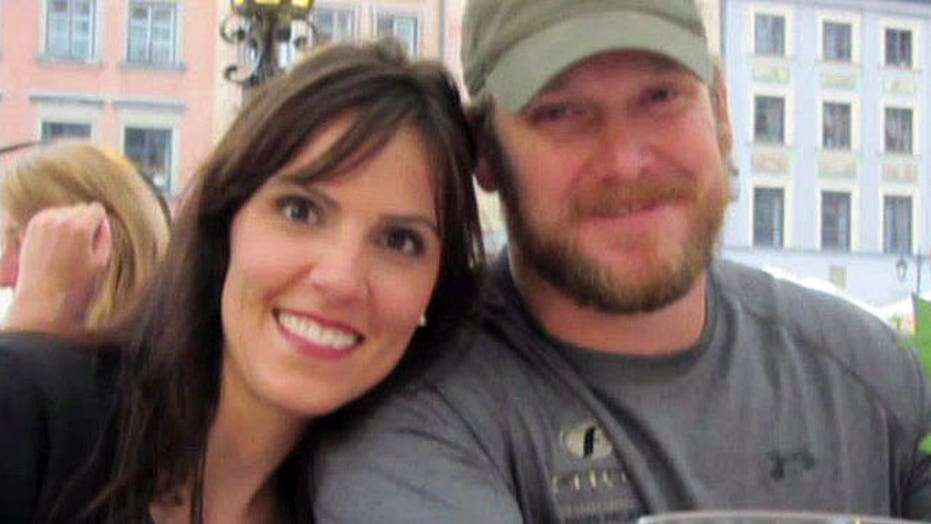 Taya Kyle reflects on her life with Chris Kyle

This is a rush transcript from "Hannity," May 5, 2015. This copy may not be in its final form and may be updated.

SEAN HANNITY, HOST: That was the scene from the blockbuster hit "American Sniper." This blockbuster grossed -- get this -- a half-a-billion dollars worldwide, won numerous awards. Some groups have been trying to ban the film from being shown even on college campuses. Here with reaction is the author of "American Wife: A Memoir of Love, War, Faith, and Renewal," the widow of Chris Kyle, the most successful sniper in American history, Taya Kyle is with us.

TAYA KYLE, AUTHOR, "AMERICAN WIFE": You know, I think that it's one of those things were you hopefully go into it with no expectations because you just want the truth to be told. And it's surprising and it's a blessing that so many feel like it resonated with them.

HANNITY: This is a love story in many ways. And like every love story there's ups and downs. He's out doing his job that his country asked him to do. You're home with the kids. There were tough times.

HANNITY: And when he came home, how -- you talked about the call.  You remember that moment. Tell us about that.

KYLE: You know, I think there is a -- in your mind you can, you know they're doing things that get them into fire fights. They're in dangerous situations all the time. But there is a difference you're talking on the phone, that happens, and there is something unexpected. I think it's horrifying, and at the same time I think any military wife knows have you to try to not react or overreact until you know for a fact that something is wrong, meaning OK, I did hear it on the phone, but I know he's in fire fights all the time. So it's like this analytical process you have to go through to not panic.

HANNITY: How accurate did you think the movie was?

KYLE: I thought the movie was spot on with Chris's personality, the heart and soul, the experience that all veteran families have, especially when one of them was in combat. I think all of that was spot on. There are a couple things that there was a part with Jeff Kyle in it that really wasn't true to Jeff.

HANNITY: When -- this is an unbelievable thing that he had all of these tours of duty and he comes back. When he came back, I imagine for every soldier it's hard to turn off the switch.

HANNITY: You're in a combat zone how many tours of duty?

HANNITY: And then to come back home and have to turn off the switch, that's a hard thing to do it.

KYLE: It is. I know there is talk about first responders and police, and I have a lot of compassion for them, too, because they see a lot of things that we will never hear about on a daily basis. And they have to go home every night and pretend that they didn't see a child abused.

HANNITY: But he found helping other people, he found solace in that and became the person you knew before he ever went to war. And then this tragedy happens. Take us back to that day.

KYLE: You know, I think that for me -- it's not that I thought that somehow he would live where the rest of us -- any of us can go at any moment. I think it's the horror of knowing someone would do that on purpose, and especially when they were --

KYLE: Yes, they were there to help them, and two people, not just one. It adds up. That day was a day like any other day, honestly. We had kids sports in the morning and plans for that night. And --

KYLE: It is hard.

HANNITY: How are your kids doing?

KYLE: They're great. You know, we still, you know in the past few weeks we're had moment where we're grieving and we're talking about it.  And we're constantly laughing and talking about their dad.

HANNITY: I have to tell you, because I just got the book and I started reading it. I couldn't put it down. It's a great book, "American Wife: Love, War, Faith, Renewal." Taya, it's really an honor to meet you.  I'm so happy for you and your family and the success.