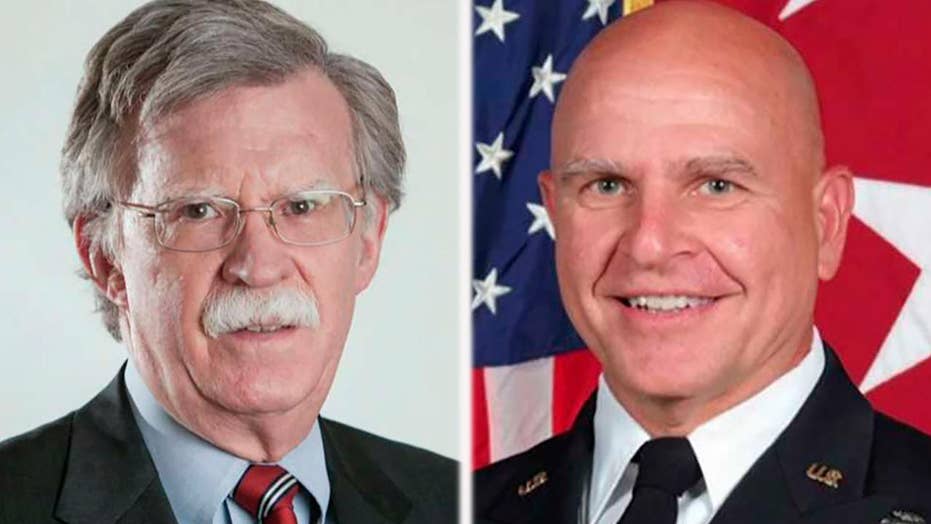 President Trump thanks H.R. McMaster for his service, McMaster to retire from the U.S. Army effective this summer; reaction and analysis from the 'Special Report' All-Stars.

This is a rush transcript from "Special Report with Bret Baier," March 22, 2018. This copy may not be in its final form and may be updated.

CHRIS WALLACE, ANCHOR: We have breaking news. President Trump has just tweeted "I am pleased to announce that effective 4/9/18," April 9th, "Ambassador John Bolton will be my new national security adviser. I am very thankful for the service of General H.R. McMaster, who has done an outstanding job, and will always remain my friend. There will be an official contact handover on 4/9," April 9th.

I think it's fair to say -- let me first bring in the panel: Byron York from the Washington Examiner; Susan Page of USA Today, and Jonathan Swan of Axios. I think it's fair to say that this -- while the timing may be a bit of a surprise, the fact that McMaster was going to be out sooner probably rather than later is maybe a surprise, the timing of it. Jonathan, you've been covering this, the question as to whether or not McMaster is out and when he was going to be out and who the replacement was going to be. Your thoughts?

JONATHAN SWAN, AXIOS: I tell you, this has shocked people inside the building. Again, it's the timing of it. There was an assumption at some point he was going to remove H.R. McMaster. They never formed a personal chemistry. He never worked out how to brief the president.

And this appointment about John Bolton, this is not about ideology. This is not about ideology. John Bolton is as interventionist and hawkish as they come. And this is about chemistry with the president of the United States. He thinks he's strong, he sees him on television, he likes him. And, again, H.R. McMaster never really gelled with this president. It didn't become as toxic as it did Rex Tillerson, the secretary of state, but he was seen as a dead man walking for months inside the White House.

WALLACE: I want to talk a little bit more about this, but General McMaster has just issued a statement in response to the statement from President Trump. McMaster says "After 34 years of service to our nation I am requesting retirement from the U.S. army effective this summer after which I will leave public service. Throughout my career it has been my greatest privilege to serve alongside extraordinary service members and dedicated civilians. I am thankful to President Donald J. Trump for the opportunity to serve him and our nation as the national security adviser. I am grateful for the friendship and opportunity of the members of the National Security Council who work together to provide the president with the best options to protect and advance our national interests. I'm especially proud to have served alongside the men and women of the National Security Council staff who established a strong foundation for protecting the American people, promoting American prosperity, achieving peace through strength, and advancing American influence. I know that these patriots will continue to serve our president and our nation with distinction."

Before I bring in Susan and Byron, Jonathan, the reason I think we're a little bit surprised is there was a story on the front page, I believe it was the "Washington Post" last week, that said McMaster was out, and on Friday McMaster and Kelly said, no, he's not out, that he's there with that dreaded vote of confidence. So why give him the vote of confidence and then less than a week later pull the rug out?

SWAN: Because the honest truth is they didn't know the timing. They didn't know the timing. And I'll tell you because I was one of those reporters on Thursday that reached out to the White House. And the reason the "Washington Post" could run that story was the White House stopped pushing back. On Thursday last week, the White House stopped leaning into aggressively opposing reporters who were saying I'm hearing McMaster is out. They subtly said basically behind the scenes, we're not really going to wave you off in a very aggressive way.

The next morning, you can't completely say the guy is gone while he's still in the job, so they had to walk this very awkward tightrope knowing full well that the president of the United States wanted a new national security adviser, not knowing who that person would be or when he was going to make the decision. And I'll just tell you, this afternoon I was getting calls from the White House. The press team was chaotic and running around. It seems to me like they were caught a little bit off guard by what happened today.

WALLACE: Susan, there are two aspects of this that are interesting. One obviously is McMaster, his service, why he didn't gel with the president, and then the appointment of John Bolton and what that says about the president's foreign policy going forward. We've got to remember we're less than two months away, if it goes as planned, from a summit with Kim Jong- un, the president of North Korea, and the president is going to have a completely new, except for the defense secretary, national security team, a news secretary of state in Mike Pompeo, a new national security adviser in John Bolton.

And we also need to remember McMaster was brought in after the precipitous and sudden firing after three weeks of Michael Flynn as national security adviser. First your thoughts on McMaster, what he did right, what he did wrong.

SUSAN PAGE, USA TODAY: Well, as we've said, he wasn't a good fit personality-wise with the president. Although Bolton wasn't either when they first met. Remember Bolton was up for a job, went in and met with the president and did not immediately click with him either.

The reason this is shocking but not surprising, because we knew McMaster was having trouble. It's shocking because of the timing that you mentioned. This spring we're supposed to have a meeting with the North Korean leader. We may not have a secretary of state. We don't know that Mike Pompeo will be confirmed by the time the North Korean meeting takes place, if it takes place on time. Of course the national security adviser can work at the president's discretion, doesn't require confirmation. So he can start in April as they've said.

But this is the time when we've got these huge foreign policy challenges. We know that the State Department is not staffed in the way it's traditionally been staffed up with experts, and now the president will have this new team that will take presumably at least some time to find their footing.

WALLACE: And as I'm thinking as you're talking, we're all obviously reacting in real time here, the president surprised his foreign policy team when he had his phone call with Vladimir Putin this week, not only congratulating him on his victory but, perhaps more consequentially, talking about having a meeting in the not-too-distant future, and they're not supposed to be in the same city for one of these huge multilateral meetings until next November. So conceivably they could be on the fly be having to deal with a Kim Jong-un summit and a Vladimir Putin summit.

PAGE: And Meanwhile we've started a trade war with China. So if you want to talk about --

WALLACE: Well, we don't know that we have a trade war with them.

PAGE: It's possible. It's a world in turmoil, that's for sure.

WALLACE: It is interesting, Byron, about John Bolton, who is a respected member of the FOX News team as a contributor, because I do know the president was considering him when he first came in in December during the transition, December of 2016. And one of the concerns was the fact that he was very aggressive, that he was a neoconservative in the sense of wanting to confront other countries. Of course the president ran on the idea of avoiding those kinds of international entanglements.

BRYON YORK, WASHINGTON EXAMINER: I think you can talk about one policy in particular in the sense that McMaster I think was a guy who told the president he couldn't do stuff, particularly concerning the Iran nuclear deal. It has to be recertified every three months, so it's come up four times so far. And the president wants to get out of it. And they said no, no, you can't do that. Maybe you should pull out a little bit or issue an ultimatum or get some other people and try to get them on board. There's other things you can do. Meanwhile, our commitment to it stands.

Also, this is a position that doesn't have to be confirmed by the Senate, and George W. Bush when he made Bolton the U.N. ambassador had to do it through recess appointment because Rand Paul and a few other members of the U.S. Senate just said it would not happen. So it had to be, if you were going to appoint Bolton, had to be in a non-confirmed position.