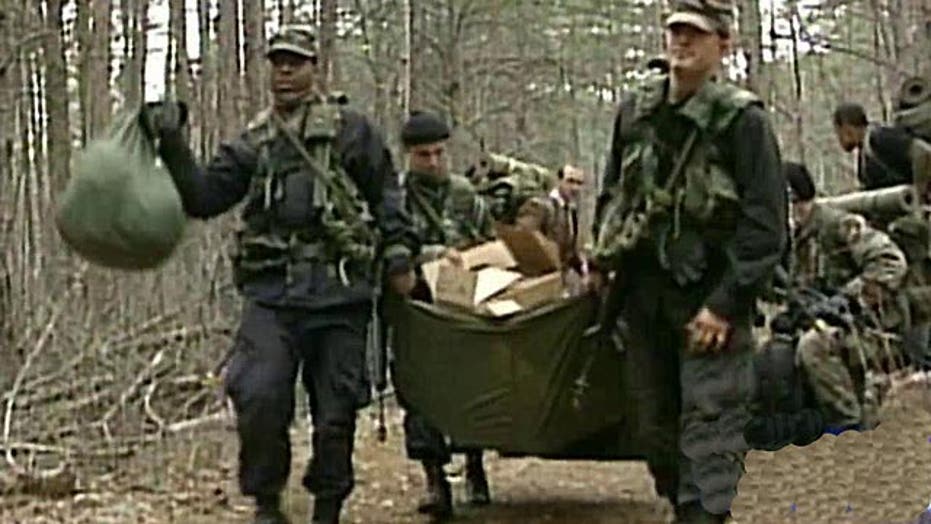 LT. COL. MARK LASTORIA, U.S. ARMY SPECIAL OPS COMMAND: All we want to do is make sure our guys are trained for combat overseas. That's it.

UNIDENTIFIED MALE: Would the commission consider reversing their invitation to these guys? And would the court be offended if I told the colonel that I didn't believe a single word that he just said?

That has raised some questions there in some quarters in Texas, and as you heard in some of these town halls, to the point where a representative went to the paper in Midland, said "The governor added fuel to the fire of all this when he asked the Texas State Guard to look into it. In my view, that's pandering by the governor and he didn't need to do that." In fact the governor did call out the Guard to check out the U.S. military operation. He was asked about it today.

GOV. GREG ABBOTT, R-TEXAS: We're just trying to facilitate communication and to make people feel comfortable and informed about what's going on. The problem that we have is that there are some people who are uninformed. And I think we're setting them at ease. And so I think we are all together on the same page of making sure that we rally behind and support our military while at the same time making feel our fellow Texans more at ease.

BAIER: Internet, social media, it's all over the place, all kinds of theories. We're back to the panel. Jonah, what about this?

JONAH GOLDBERG, NATIONAL REVIEW: First of all, my real feelings I'll be blinking in Morse code, so please pay attention. No, I think this was badly handled by pretty much everybody. The military didn't do enough outreach early on to get the ground prepared for this when they moved this exercise there. I think Abbott -- I'll take him at his word that he actually was trying to facilitate the proper information, not misinformation, but the way he did it created political problems.

This has been catnip for the political left in a lot of way who love to make fun of places like Texas, love to make fun of, you know, the flyover people and all the rest. But it's important to remember there's a paranoid style in American politics everywhere. It is in inner city Baltimore. It is among the truthers in New York. It is all over the place, and sometimes it pops up, and it's the job of public officials to push it back down.

BAIER: Just to be clear, the Army says it's Special Operations, Special Forces training mission where they're trying to go to different places that resemble where Special Forces operate. There have been all kinds of things about what this is allegedly about.

MARA LIASSON, NATIONAL PUBLIC RADIO: Barack Obama is getting toward declare martial law, take over Texas. That's what this is about. I mean, this is the black helicopter kind of way of thinking. And I think by calling out the National Guard to quote, "monitor this," I think that Abbott did put fuel on the fire. I think his motives might have been to just clear the air, get people more comfortable and reassured. But it seemed like he was aiding and abetting the people who thought this was some kind of nefarious thing.

And I think it was a self-inflicted wound for Republicans because now anybody who wants to call Texas, the red state of Texas a bunch of whacko birds, they can.

BAIER: Here is Senator Ted Cruz and the defense secretary on this issue.

SEN. TED CRUZ, R-TEXAS: My office, we reached out to the Pentagon to inquire about this exercise, and we're assured that it is a military training exercise. And I have no reason to did you tell those assurances, but I understand the reason for concern and uncertainty, because the federal government has not demonstrated itself to be trustworthy in this administration, and the consequence is that many of its citizens don't trust what it says.

ASH CARTER, DEFENSE SECRETARY: We have given information to authorities in Texas and the information that they have requested. We're very open and up front about our training activities in the United States.

STEVE HAYES, THE WEEKLY STANDARD: We had Governor Abbott at The Weekly Standard today and I asked him did he think the Texas guard could actually prevent the U.S.
military from taking over the rest of the country.

LIASSON: Assuming that's what they want to do.

HAYES: I don't think he thought that was as funnily as I intended to be.

BAIER: Did you see the Alamo?

I accepted his explanation. If you look at the original letter that he wrote, he said he was going to ask the Texas guard to monitor the situation to help provide information. And the last paragraph makes very clear that he was not seeking some kind of confrontation with the U.S.
military but was actually trying to just tell people what was going on. I think that's what he did. Maybe he didn't need the Texas guard to do that, but I think this is a mountain out of a mole hill.

GOLDBERG: It's also really important to point out that the U.S.
government already controls Texas, right? I mean it's part of the country.

BAIER: That is it for the panel. But stay tuned for an example of why it's always good to be careful with your words, especially in local news banter.