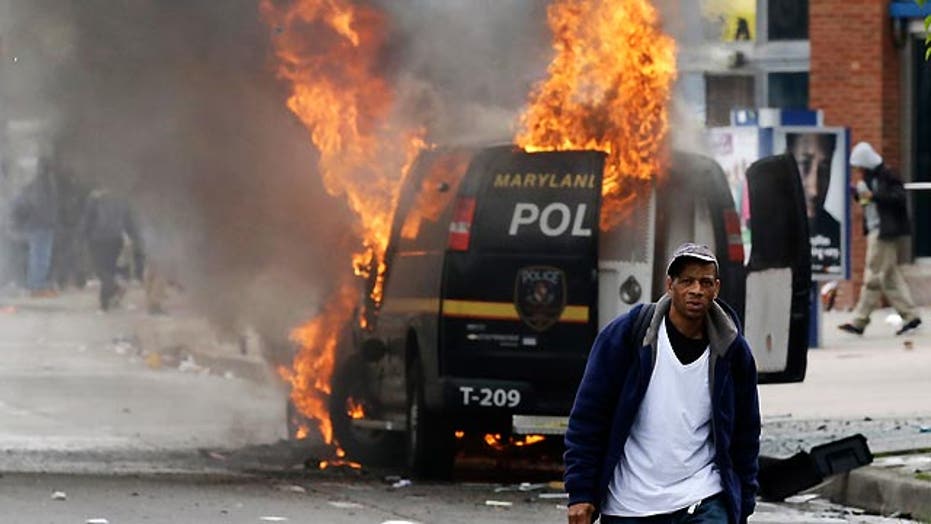 Reaction to rioting in Baltimore

This is a rush transcript from "Special Report," April 27, 2015. This copy may not be in its final form and may be updated.

BRET BAIER, ANCHOR: Looking live in Baltimore as police are trying to get the situation under control. there you can see a CVS on fire. It was looted earlier. It is one of the spots that these protests have moved through these areas. This is one area of Baltimore. It's north Baltimore. But we are watching a number of different locations as police are preparing for nightfall. This after there's been a lot of reaction to what the mayor said about the situation with these protests developing over the weekend.

MAYOR STEPHANIE RAWLINGS-BLAKE, BALTIMORE, MD: I've made it very clear that I work with the police and instructed them to do everything that they could to make sure that the protesters were able to exercise their right to free speech. It's a very delicate balancing act because while we try to make sure that they were protected from the cars and the other things that were going on, we also gave those who wished to destroy space to do that as well.

BAIER: So, let's bring in our panel, Steve Hayes, senior writer for The Weekly Standard, Juan Williams, columnist with The Hill, and Mara Liasson, National Political Correspondent of National Public Radio, and syndicated columnist Charles Krauthammer. Let's start there as we continue to monitor live the situation in Baltimore. Steve?

STEVE HAYES, SENIOR WRITER, THE WEEKLY STANDARD: Well, obviously the people most responsible for most of the violence are the rioters. They are not protesters. They're rioters, and they bear the responsibility alone.

But listening to that, it's really a jarring comment. It's hard to imagine a public official saying something like that which I think could effectively be seen as a green light for this kind of destruction. She said we're providing the safe space to destroy. People went out and destroyed. I don't think anybody should be surprised at that. And what I think has been surprising is looking at the reluctance of the police to move in further and try to restore order before this spins totally out of control before nighttime and before these gangs that we've all been hearing about so much can be activated.

JUAN WILLIAMS, SENIOR EDITOR, THE HILL: Well, I would differ to this extent. I think what happened today is the kids get out of school around 3:00. There was a lot of social media communication about let's go after this, let's have a total attack, let's go -- and so I think -- and then the gangs got involved as well.

So the message over the weekend was a mistake. The mayor spoke in an errant fashion when she said give people space to destroy. You want to give people space to protest. And what we've seen here now is anarchy take hold, and you need a strong force. You don't need to make a mistake of making the government or the police into some oppressive force, a provocative presence, as we saw back in Ferguson with the militarization of the police.  But you need to have a strong message sent, and that's why it's disappointing we haven't heard from the mayor to clean up what I think as being a misinterpreted statement. She's simply saying people need to have the sense that their First Amendment rights to be heard are being protected by this government.

BAIER: Mara. She walked it back a little bit, but it was not a full --

MARA LIASSON, NATIONAL PUBLIC RADIO: I think this is a bad day for the government of Baltimore and the state of Maryland. I mean, we have a written statement from the governor. He's put the National Guard on alert, but he hasn't come out and said anything. And she really hasn't been a presence recently to explain what her police force is doing to keep order.  And right now it looks pretty bad. I mean, it looks like they are standing around and buildings are on fire. And I think, you know, she's been good on this in the earlier weeks of this controversy. She needs to come out again.

BAIER: Yeah, we should point out, this is one part of Baltimore. It's not like the city is on fire or essentially under siege, but it's a situation and it's dangerous.

CHARLES KRAUTHAMMER, SYNDICATED COLUMNIST: There's a total failure of leadership here. People can look at the scenes and they know that there's a city out of control on the ground. But there's also a sense that it's out of control at the level of governance. You have to show up. You have to have the governor out there. You have to have the mayor out there. You have to have a police chief out there speaking, even if it's every -- if you don't have a lot of new information, you have to assure people you know what is going on and you have a plan. You know, you don't need a Yeltsin on a tank. You don't need a Giuliani on the streets of New York on 9/11.  You need somebody who gives a sense of control. There was a blackout of news. They have announced nothing. Everything is speculative. All these stories are tweeted. You have to put people out. I think with the new governor and a mayor who makes a statement like that this is actually aggravated the situation in a way that is really quite astonishing.

BAIER: We'll continue to watch live the situation. Back with the panel after a quick break.