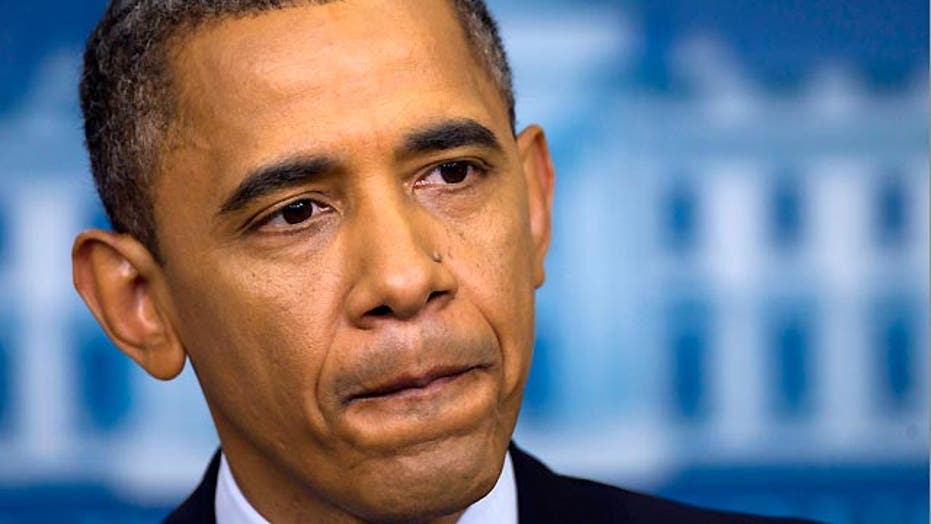 This is a rush transcript from "Special Report," June 11, 2012. This copy may not be in its final form and may be updated.

PRESIDENT BARACK OBAMA: It is absolutely clear that the economy is not doing fine. That's the reason I had the press conference. The folks who are hurting, where we have problems and where we can do better is small businesses that are having a tough time getting financing. We have seen teachers and police officers and firefighters who've been laid off.

The only time government employment has gone down during a recession has been under me. I make that point just so you don't buy in to this whole bloated government argument that you're hearing.

BRET BAIER, ANCHOR: President Obama on Friday cleaning up, if you will, his news conference where he said the private sector was doing fine. And then the second sound bite May 8 when he was talking about cuts that have come in government. The White House Press Secretary Jay Carney said these were cherry picked numbers, but this is from the Bureau of Labor Statistics. Unemployment rates, government workers 4.2 percent. Nationally, of course, 8.2 percent as of May. Unemployment rates public versus private, government workers 4.2, manufacturing 7.1, leisure and hospitality 9.7, construction, 14.2 percent. And then you see this public versus private nearly 23 million government workers, 900,000 unemployed. Those are from the Bureau of Labor Statistics. We're back with the panel, Charles?

KRAUTHAMMER: Well, look, I think what the president is betraying with this statement where he says about the public sector workers is his belief that they are equivalent to private sector jobs, that if you have -- say the private sector is doing OK or somewhat stalled, then you want to buff it up by increasing the number of government bureaucrats who are hired, and that is what he believes. Whereas a private sector job is job where the government doesn't have to put a penny in and it gets revenue from the taxes, whereas a public sector job is somebody who lives entirely off the other people who are working, off their taxes, it's hugely different.

We can see in Europe the meltdown of the countries from Greece to Portugal, Spain and Italy, which have hugely expanded the public sector as a way to provide employment, and they are in collapse. But this is what he believes.

Now, he will say on the stump as you showed in that sound bite, oh yes, if he is hit on debt and deficits, I'm a guy who also wants to shrink government. That is obviously a contradiction and I think it's obviously insincere. He believes big government is the answer to just about every problem, including unemployment.

BAIER: Speaking of shrinking government, Democrats are obviously pointing to Mitt Romney's comment on Friday about doing just that. Take a listen.

MITT ROMNEY, R – PRESIDENTIAL CANDIDATE: He wants another stimulus. He wants to hire more government workers. He says we need more firemen and policemen, more teachers.  Did he not get message in Wisconsin? The American people did. It's time for us to cut back on government and help the American people.

BAIER: So the politics of this, A.B., and how it's playing out, it's clear that the White House has been in damage control since Friday. But what about their pushback on that statement and how it plays to what he said May 8th?

A.B. STODDARD, ASSOCIATE EDITOR, THE HILL: I think they have been in damage control mode since the Friday before when the terrible jobs came out. I think they are just grasping at something to get out of this terrible free fall of Friday when he said the private sector is doing just fine. Its' going to come back to him again and again, particularly, because the economy is not expected to improve for remainder of the campaign. It is something he can use with his base to say Mitt Romney doesn't understand the middle class. He doesn't, he doesn't, he thinks that we have firefighters, teachers and cops, he wants to fire them all. And that will help them in this terrible moment.

But "the private sector is doing fine" is not going away and he knows it. Every jobs report Friday from now on and numerous other occasions and commercials he will hear this line back at him. John McCain's line about the fundamentals of the economy being strong was the beginning of the end if not the end of his campaign. Democrats used it, they whacked that until it was dead and bloody. And the Romney campaign's gonna do the same.

BAIER: Jonah, Brit Hume argued earlier in the program in his commentary that this is really how the president thinks, and that another stimulus, another big influx of money for the government workers is really what he wants to do.

JONAH GOLDBERG, AT LARGE EDITOR, NATIONAL REVIEW ONLINE: Well, I think Brit is absolutely right. The second, where you called it -- he cleaned up his statement, he didn't clean it up. Nowhere in that statement did he actually sort of rebut the logic or reasoning from his press conference statement.  David Axelrod on another network was asked by Candy Crowley three times yes or no, is the private sector doing fine? David Axelrod could not answer the question.

Obama's theory is that what we need is this new government controlled stimulus. And he has to have that theory about the government jobs, because if he concedes that the private sector is doing terribly, then he basically is conceding the fundamental argument of the Romney campaign, that Barack Obama has failed to fix the economy. So he has to say hey look, it's the Republicans stopping me from hiring more cops and firefighters that's keeping us from having a robust economy. And that just doesn't tract logically or factually.

CHARLES KRAUTHAMMER, SYNDICATED COLUMNIST: Or empirically. It isn't as if this is a big theoretical argument. Obama had a dry run with a lot of money, almost $1 trillion in stimulus one. And a huge amount of it went exactly at the kind of government jobs he is talking about today. And we tried it and we have had 40 straight months of eight percent plus unemployment for the first time in U.S. history, and the most anemic economic recovery since the Second World War. So we've already had this experiment and it failed.

BAIER: Their pushback is the hole was deeper than we thought it was going in, and now there are many Democrats who say that the stimulus wasn't big enough.

KRAUTHAMMER: Look. They can argue that. I'm not sure there is anybody who believes it. After four years and such a slow growth, if you were to say that it's merely a delay in all of this and it is going to happen, perhaps you'd believe it. But when you are seeing that in the fourth year of this expansion we're at 1.7 percent of growth, you know that it's a disaster, and it hasn't done what it was supposed to do. I think that is the definitive response. It isn't even unemployment. It's the growth rate that cannot sustain a dropping of unemployment.

BAIER: That is it for the panel. But stay tuned for something that may be a problem for one couple for some time.