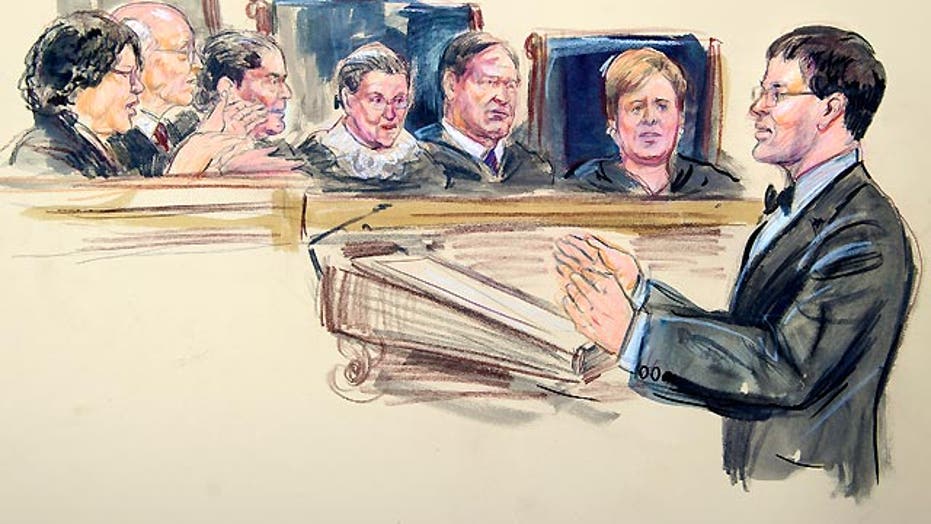 This is a rush transcript from "Special Report," April 28, 2015. This copy may not be in its final form and may be updated.

JUSTICE ANTHONY KENNEDY, U.S. SUPREME COURT: This definition has been with us for millennia. And it's very difficult for the court to say, oh, well, we – we know better.

JUSTICE STEPHEN BREYER, U.S. SUPREME COURT: You don't let them participate in this basic institution that that violates the 14th Amendment.

JUSTICE SONIA SOTOMAYOR, U.S. SUPREME COURT: People who are not permitted to be married in a lot of states go and do that, and they come back to their home states, and the home states follow the rule of marriage celebration.

BRET BAIER, ANCHOR: Well, the arguments today. It's very rare that we get to hear same-day audio from the U.S. Supreme Court. We did today in this big case about same-sex marriage. We don't often try to divine how justices are going to come down based on their questions and their arguments, but it is clear that this court is divided. And the swing vote may be, as it has been before, Justice Anthony Kennedy.

As you look at some new Fox News polls on the issue of same-sex marriage, you can see favor legalizing same-sex marriage 48 percent, oppose 44 percent, and how that has changed throughout the years back in 2003, a much different scenario. We are back with the panel. Steve, what did you take from that argument, the arguments and what you learned today?

STEVE HAYES, SENIOR WRITER, THE WEEKLY STANDARD: Well, it is hazardous to try to come to conclusions based on the questions at oral arguments. I thought Shannon Bream's piece was fantastic, rightly focused on Anthony Kennedy and particularly his use of the word "dignity." We have seen Kennedy use that word in the past to describe gays, gay rights, gay relationships. And if you look back at his opinion in Windsor, he talked about the humiliation of kids who are being raised by gay parents. He identifies, he has been a strong supporter of gay rights on the court. But at the same time Kennedy has also been a strong proponent of state autonomy. And, in a sense, what we could be looking at is this fight between two of the things that Anthony Kennedy has been the most outspoken about in the past decade.

A.B. STODDARD, ASSOCIATE EDITOR, THE HILL: Yeah, I think he is a swing vote and everyone is watching him. But I think Roberts is potentially as well. I was surprised even Justice Breyer had a similar comment about his hesitance to redefine the institution of marriage, to redefine marriage. They are all uncomfortable with this. It is not a question for this court whether or not gay marriage is a right or fair. It's a question of whether it's a constitutional right and whether they are going to overturn the rights of states to ban it. And, that's a higher threshold than is it OK with you because you feel like it's the right thing to do.

And you really heard in everyone, especially from Kennedy today, the reluctance. When he believes -- I think from what he said and what he wrote in Windsor that the marriage is a function regulated by the state.  It is not about intimacy. It's not about love or bonds, and it's viewed often for just the purpose of reproduction. So, it's going to be very he interesting where this takes us. It could be six-three liberal, it could be five-four conservative. It could go a lot of different places.

BAIER: A lot of different ways. The other issue is whether states that do not permit same-sex marriages have to recognize marriages performed in other states. That's another element to this, obviously on a federal level.

CHARLES KRAUTHAMMER, SYNDICATED COLUMNIST: I think that one is more likely to get a majority. But on the fundamental one of is gay marriage a right, I think it all hinges on Kennedy and what side of the bed he gets out of.

Remember, he wrote the deciding opinion in the decisions in 2013 overturning the Defense of Marriage Act, meaning the federal government had to recognize a gay marriage in any state. And, he offered two defenses of his position, and they were somewhat contradictory. One was federalism, state rights. Marriage is under the authority of states so whatever a state decides Washington has to recognize.

The other, however, was equal protection, which implied that every gay marriage ought to be as equally protected, or that institution should enjoy heterosexual marriage rights. If you say that, then you imply that denying a gay marriage is ignominious discrimination. That's a form of animus. He doesn't resolve that. But everything in the opinions he offered two years ago indicates that he was ready to go all the way and declare it protected by equal protection, in which case he would overturn all the state laws.

BAIER: There is one more thing. If state licenses ministers to conduct marriages, would those ministers, if it is constitutional, then be required to conduct same-sex marriages?

HAYES: Right, and then you go to the religious liberty argument. This is one area where I think conservatives are shifting their focus now, in a sense almost conceding that the gay marriage debate for all intents and purposes in the political realm is over. But can they protect those religious liberties that certainly I would argue that the founders intended.

BAIER: That's it for the panel. We will follow all of this closely.  But stay tuned for a special message apparently from the vice president.