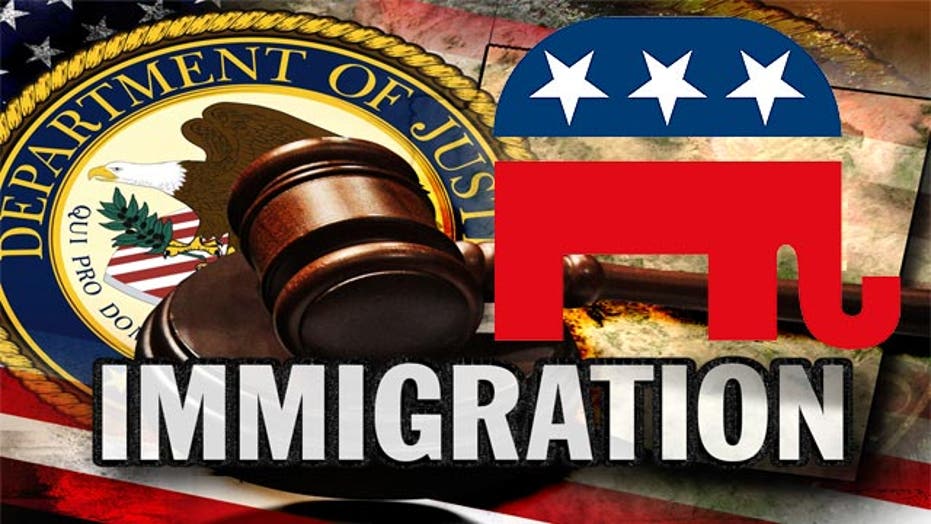 How should GOP handle immigration reform?

This is a rush transcript from "Special Report," December 4, 2012. This copy may not be in its final form and may be updated.

FORMER PRESIDENT GEORGE W. BUSH: Immigrants come with new skills and new ideas. They fill a critical gap in our labor market. They work hard for a chance for a better life. America can be a lawful society and a welcoming society at the same time.

BRET BAIER, ANCHOR: Former president George W. Bush talking about the importance for Republicans to embrace immigration reform. It is a theme that many Republicans are talking about, including, incoming Senator Ted Cruz, who talked about it this week here in D.C.

SENATOR-ELECT TED CRUZ, R - TX: I think Republicans need to remain a party that supports securing the border and stopping illegal immigration.  And at the same time, welcomes and celebrates the legal immigrants. The essence of the conservative message should be we want a dynamic nation where anybody with nothing can achieve anything.

BAIER: That was a speech well-received. We're back with our panel.  Charles, your thoughts on all of this?

CHARLES KRAUTHAMMER, SYNDICATED COLUMNIST: Well, the sentiments I think are noble, and they're correct. The problem is how do you translate it into policy? And that is where I think the Republicans have really been hurt. They, you know, they, Obama got over 70 percent of the Hispanic vote. The Hispanics should be a natural constituency. Any immigrant community should be a natural constituency of the conservative party, and it's not. And the reason I think is because immigration reform, or at least the attitude towards immigrants, is what you'd call a threshold issue. If people have a sense that the party or whoever, doesn't like you or people like, they're not going to listen to anything else.

So that I think that is the challenge. It doesn't mean they have to embrace amnesty overnight. I think there's been a case to be made for six or seven years that the way the Republicans ought to approach this is to be very strict on illegal immigration. You build a fence, and don't tell me you can't work. The Israelis have built a fence and nobody gets through that fence. You build a fence, you stop illegal immigration or at least a river become trickle. And then the generosity of American people I think will say if this if this is the last cohort of illegal in the country, the 12 million here, let's legalize them and give them amnesty, not citizenship, and take away the shadow.

I think Americans will accept that. The only reason they reject it is because they assume if you legalize the cohort here today we're going to have a new cohort of 10 million here in a decade. So I think you have to combine them, be very strict on both, but be extremely generous and say once we shut the border we're going to be very generous and accepting of people who are here illegally.

BAIER: Can Republicans get there?

BAIER: And Marco Rubio talks about that all the time.

EASTON: And Marco Rubio talks about that. When it comes to, you know, illegal immigrants, the 12 million people here, I think it's really important to remember that California with 55 delegates to –

EASTON: -- electoral votes, sorry, actually used to be a red state until there was an anti-immigrant backlash which led to Prop 187, which banned illegal immigrants from health and education. And that was ultimately overturned. But from then on, that was a Democratic state.

And I think that proposals like self-deportation, which hit home to families here even if you are here legally, the idea that your friends or family might have to go home, wait in line, and maybe never come back, that hits home. And I think that is viewed as a hostile act. You have to get past that.

Personally, I would like to go to the day of John McCain in 2007 and look for a pathway to citizenship. If that is too far for the party, then at least look at things like the new Kay Bailey Hutchison legislation, which would make a pathway for young immigrants.

TUCKER CARLSON, EDITOR, THEDAILYCALLER.COM: Well, actually, California voted for Clinton before Pete Wilson got involved in the debate over whether illegal immigrants ought to have welfare benefits. California is a Democratic state partly because it's a state of immigrants, and partly for the reasons that Charles mentioned.

What is missing in this conversation, is the fact that not all immigrants are the same. Immigrants from certain countries go on welfare overwhelmingly. Many Latin American countries send us immigrants who go on welfare. The question is, does the United States need massive new numbers of the low-skilled immigrants in a post-industrial economy? Is that good for the United States? It is mindless to say all immigrants are good. They are not. Some are, some aren't. It's like saying all days are good. Some days are good, some days aren't. We need, and the Republican Party ought to be courageous enough to draw the distinction between people who add to the sum total of the American economy, who buy in the culture, who improve the country, and those who don't. And there is a difference. Sorry.

BAIER: Yeah, but where is the screen?

CARLSON: Well, the screen begins with a conversation about outcomes.  Why is it that immigrants from certain countries have not thrived and immigrants from other countries have thrived? No one wants to have that conversation because it's considered mean, but when the future of the country is at stake, it's worth taking a rational, non-passionate, and, by the way, nonpolitical look at outcomes, and ask real questions like, why is it?  You're not attacking anybody. But these are questions that we need to ask because the country is at stake.

EASTON: But Tucker, what do you do about those 12 million people here? This guy works for a yard landscaping company. He's low skilled.  We don't need him. This guy went to a community college, maybe he can -- how do you deal with the people who are already here? That is the crux of the issue.

That is it for the panel. But stay tuned to see one difference between men and women.