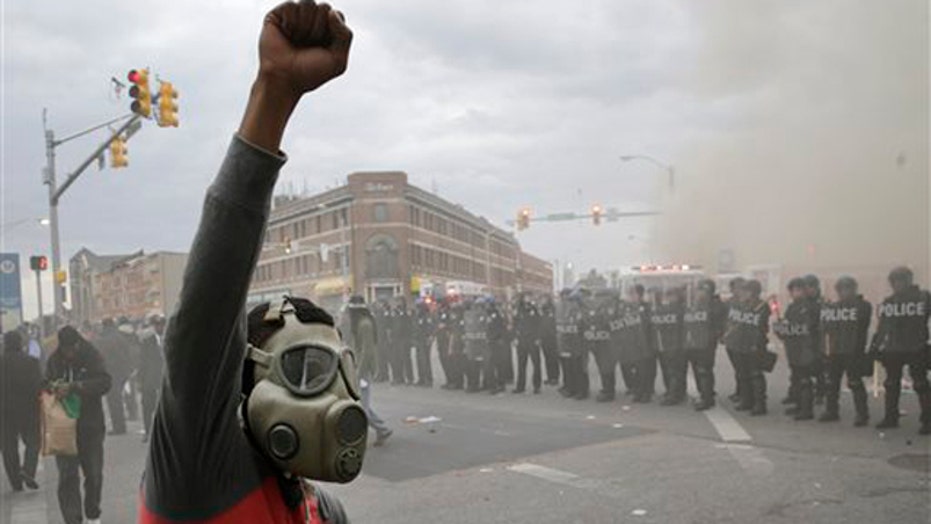 Joe Hicks provides insight into the unrest in Baltimore

Activist weighs in on 'The Kelly File'

This is a rush transcript from "The Kelly File," April 27, 2015. This copy may not be in its final form and may be updated.

MEGYN KELLY, HOST: I want to get to civil rights leader, Joe Hicks, who is with me tonight to speak to what -- what is it? Is this the culmination of several police/civilian incidents we've seen in many cities often with black men being hurt or being killed by police officers? Or is this about, as we heard the one man saying, something -- something bigger than that, a depressed economy, lower socioeconomic status, few opportunities? You tell me.

JOE HICKS, AFRICAN-AMERICAN CONSERVATIVE COMMENTATOR AND COMMUNITY ACTIVIST: Well, there's no correlation between poverty and trying to burn down your own centers of the city in the places that you need to have, obviously places to go to work at. What I think has happened here, Kelly, is that, you know, Megyn, is that, what we've seen is a pattern that's emerged starting with Trayvon Martin case. And obviously, no large-scale violence broke out.

But then we had Ferguson, then we had Staten Island, and now we've got a series of other incidents concluding with Freddie Gray and this is almost this notion that this has become the new civil rights movement, oddly enough, and then this has got to have people like Dr. King spinning in their grave, to hear people describing this as some sort of movement now.

HICKS: But I think there's.

KELLY: -- we hear that black lives matter and what we are told is.

KELLY: -- you know, they -- folks feel like every week they see another black man get shot by a cop. Now in the most recent two incidents, the cops got charged, but there was videotape, and that's what these folks say.

KELLY:: -- that there's not videotape in every case and when there isn't one, the cops don't get charged.

HICKS: But -- of course, and I think there's a certain amount of justifiable outrage over the killing of Freddie Gray because it's a very mysterious and bizarre circumstance.

HICKS: Obviously, the man didn't break his own neck. So then there's clearly incidents here that we need to get more information about, and that's why there's a number of investigations going on. But there's almost an infantile urge here to get what they want and get it now on the part of the protesters, like, I want the kind of justice that I demand and I demand it right now.

HICKS: Well, that's not the way things operate, so it's almost an infantile impulse to get what they want, despite the fact that we do hear people calling for calm here.

HICKS: But there's an expectation here that -- that they're somehow the front of a new civil rights movement. I think that's outrageous. We knew what the protesters were trying to get in the old days, if you will, of Dr. King and others. It was about justice. It was about becoming part of an American society. Having all --

KELLY: Were they running around looting.

KELLY: -- were they burning down their own stores? I mean, minority-owned stores getting burned to the ground.

HICKS: That was unheard of. That only came about in the long, hot summers in the 1960s where you did have these -- the numbers of these riots, and certainly here in Los Angeles where I'm speaking to you from, in Detroit, in Chicago, in Washington, D.C., almost every major urban center had its riot in those long, hot summers. But this was after the culmination of the '64 and '65 Civil Rights Act and Voting Rights Act. So, they were the -- the early civil rights folks were after something very different.

HICKS: The question needs to be asked, well, what are these folks after?

HICKS: And that's the mystery because if you ask them, you get a mélange of all sorts of issues from capitalism is horrible, to we want jobs, but then there seems to be an impulse against places. They're burning down places offering jobs.

KELLY: The -- just, again, we're looking at the fire. Now we were today there was a senior citizens center on fire. Now, we're told that there is -- that the congregation of the Southern Baptist Church, that their new community center is currently engulfed in flames. They're saying it may not be connected to the --

KELLY: How is this going to make them listen? Who's going to get behind these folks who have declared themselves criminals by going out there and tearing down their community? How -- who -- they completely drown out the voices of those peaceful protesters we've been seeing for days and the ones who were trying to stop them.

KELLY: -- because the loudest voice always gets heard.

HICKS: Well, you know, going back to Moynihan report, there -- there was this threat, this danger of the kind of people we're seeing on the screen that just as we're speaking here, this kind of dysfunctional element that was created in the centers of cities. Some argue that certainly welfare and dependency on welfare had a big part in creating these kind of folks.

HICKS: -- and here they are, the culmination --

KELLY: Is that true? Do you believe that?

HICKS: -- years later. I do believe that. I do believe that. I think Moynihan is coming back to haunt us in a very interesting kind of way and the Civil Rights Movement as it exists now isn't addressing those issues. Despite all of the carnage that's going on in cities, black men killing other black men, which is the real threat, not police killing individuals.

HICKS: Yet we only see the protests when police will kill a black individual and then it's a matter of black lives don't matter.

KELLY: What about beyond --

KELLY: -- what about, Joe, beyond police on civilian violence or, you know, incidents, because the greater socioeconomic status that the folks here in Baltimore are dealing with, and African-Americans in particular --

KELLY: -- misunderstands their situation, that they can't do it, they've been kept down doing for so long, that society needs to lift them up now.

HICKS: See, we can't continue to make excuses. When Los Angeles had its riot here and a lot of damage done, a lot of lives lost, a lot of buildings burned, and people said, "Well, we need more stores in our community, we need our big box stores, we need more business to come, we want more investment in the community."

So it's a self-defeating -- it's the -- the tail chasing that goes on here about people saying, "Oh, there's poverty, there's not opportunities, none of the same kind of amenities that we have in other parts of our city." Yet look at what goes on, and -- and those people that own those businesses, what are the small businesses or large businesses, they got to be reconsidering whether or not they're going to rebuild or whether they want to invest in a place --

HICKS: .-- where they might lose everything in several years.