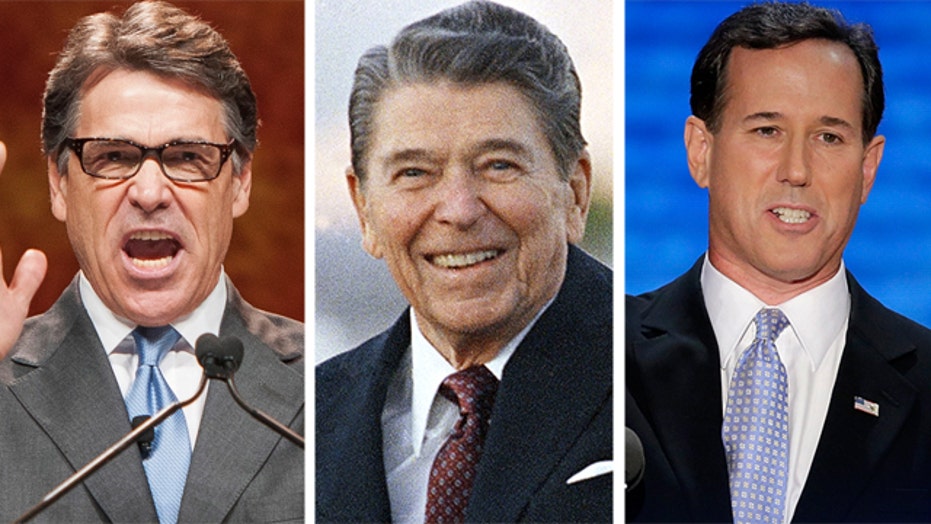 Republican presidential candidates take shots at each other as field grows

This is a rush transcript from "Your World," May 26, 2015. This copy may not be in its final form and may be updated.

NEIL CAVUTO, HOST: You know, for all my years of studying Ronald Reagan, this was about the only time I saw him lose his temper.

JOHN BREEN, EDITOR: Will you turn that microphone off, please?

REAGAN: I am paying for this microphone!

CAVUTO: I think that made him president, Reagan famously ripping sponsors over a Republican debate that he correctly noted he was kind of paying for.

But you notice, back then, Reagan did not point the finger at his Republican opponents. That was by design, because the Gipper famously said that any Republican who did so would be violating his most sacred commandment, that thou shalt not speak ill of other Republicans.

Back then, it was all about staying above the fray. Contrast that with today's current crop of Republican candidates and wannabe candidates more than happy with joining that fray.

RICK PERRY (R), FORMER TEXAS GOVERNOR: Leadership is not a speech on the Senate floor. It's a record of action.

GOV. CHRIS CHRISTIE (R), NEW JERSEY: There are going to be some who are going to come before you and going to say, oh, no, no, no, this is not what the founders intended. But, you know, you can't enjoy your civil liberties if you're in a coffin.

RICK SANTORUM (R), FORMER U.S. SENATOR: You don't want to be able to have a candidate that represents the Republican Party whose national security experience is a briefing book.

TRUMP: I was so disappointed when I looked at his answer on Iraq. It was such a stupid answer and such a foolish answer.

CAVUTO: All right, so the Donald not a fan.

CAVUTO: To historian Doug Wead on the harm they risk, they all risk, to each other and themselves.

Doug, you know, we expect these bygones to eventually be bygones by the time you get to the convention, so we will forget all about this, but you're noticing a particular acidic nature to this.

DOUG WEAD, FORMER ADVISER TO PRESIDENT GEORGE H.W. BUSH: Yes, this is this is...

WEAD: This is pretty bad. You even had a candidate announce for president, and his aside to the journalists were, the only reason I'm running for president is to take out this other guy, some -- some opponent that he hated, not to make America a better place, but because he hated somebody.

WEAD: Ronald Reagan would turn over in his grave with that -- that kind of Republican competition.

And Reagan not only believed in this 11th commandment. He -- we mistakenly think he believed it naively in a different time, a golden age. It was just as bitter back then as it is now. Politics hasn't changed. Reagan used this principle to his advantage. And he won with it.

CAVUTO: You know, what I'm wondering, though, by the time 1980 came around, and he was the front-runner for the GOP nomination, he got a scare by George Bush Sr. certainly in Iowa. And, of course, we all remember how then President Bush senior, or candidate Bush at the time, had said that it was all voodoo economics, what Ronald Reagan was selling, but he avoided the temptation to come back and reply in kind to Bush Sr., ultimately picking him as his running mate.

But I guess I'm wondering, it's different now because so many are vying for the nomination and so many argue that they have just as good a chance as anyone else. Does that change it a little bit, that it's easy to be kind and decent to your fellow Republicans when there aren't that many running against you?

WEAD: Yes, the process has changed a little bit.

And Reagan was usually ahead, so it was easy for him to be kind to his fellow Republicans.

WEAD: You know, Charles de Gaulle had the dictum that the key to politics is getting ahead and staying ahead. So, as long as Reagan was ahead, it was OK.

But I have to add that there was a period you know very well when he challenged Gerald Ford. When, after four primaries, he lost by being positive, he went negative.

WEAD: And he -- and he won going negative.

So, four years later, when he won the presidency by being positive, he didn't do that without instruction and advice. He knew the power of negative campaigning. His chief strategist in the South, Lee Atwater, was the authority eventually on negative campaigning. Reagan knew, and he still chose to take the high road.

I think that's why there's hope today. I know it's going to be a bloodbath.

WEAD: It's going to be really bad, but there's hope because of what Ronald Reagan was able to do.

CAVUTO: It can be done. You can argue respectfully.

WEAD: It can be done.

CAVUTO: All right, Doug Wead, thank you, my friend. Good seeing you again.