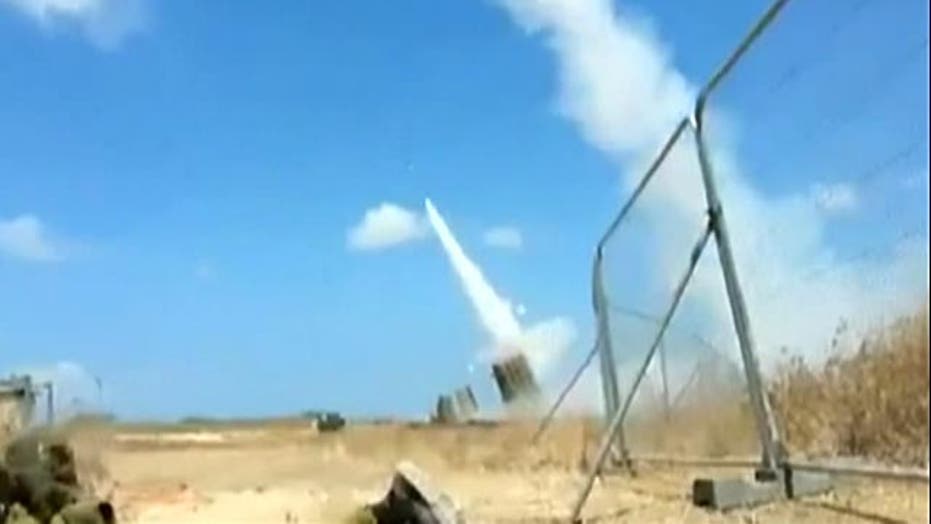 Israel’s Iron Dome has played a high profile role in the current conflict with Hamas as the country's military deploys state-of-the-art technology to tackle missile attacks.

The Iron Dome missile defense system, built by the Israeli company Rafael, was initially created in response to the 2006 conflict with the Islamist Lebanon-based group Hezbollah.

Hezbollah launched thousands of rockets that caused dozens of casualties and massive amounts of damage.

The system intended to prevent this sort of devastation again took more than four years to develop and made its combat debut in April 2011.

During Operation Pillar of Defense, the last serious conflict between Israel and Hamas in 2012, Israel stated the system destroyed 84 percent of the rockets headed towards Israeli towns and cities.

Now in Operation Protective Edge, the current Israeli campaign against Hamas in Gaza, the Iron Dome has contended with approximately 1,400 missiles launched into Israel over the course of nine days.

When the enemy, say Hamas in this current conflict, fires a missile or artillery shell at Israel’s territory, radar tracks the incoming threat.

The threat is relayed, the data analyzed and target coordinates sent to the missile firing unit.

Interceptor Tamir missiles are then fired at the enemy’s projectile to eliminate the threat.

Magic Wand
The Iron Dome is not the entire missile shield – it is merely one layer of it. It is only intended to tackle missiles with ranges between 2.5 miles and about 43 miles.

David’s Sling, or “Magic Wand,” is the next layer protection. It targets ballistic missiles and medium-range rockets, unmanned and manned aircraft, cruise missiles and guided weapons in the 43 to 155 miles range.

Under development with Raytheon, this layer has been very successful in tests and slated for operation this year.

The next layer is the Arrow missile system to tackle long-range ballistic missile strikes.

The Arrow system uses the two-stage Arrow 2 interceptor with a fragmentation warhead to destroy an incoming target.

Its successor, Arrow 3, is also a two-stage interceptor and destroys an incoming threat with an exoatmospheric kill vehicle. This generation uses a “hit-to-kill” approach instead of a fragmenting warhead. It will expand the engagement range up to potentially four times.

Rafael is also developing Iron Beam. This system is intended to deploy a laser beam to eliminate mortar shells that have slipped through the Iron Dome.

What’s the price tag?
Iron Dome has made a lot of headlines for its astonishing success rate at defeating incoming threats. Israel has repeatedly announced success stats around 85 percent.

However, this sort of protection does not come cheap. To launch just one of Iron Dome’s Tamir interceptor missiles the price tag is approximately $60,000 – although some estimates place it as high as $100,000.

With that tab, an enemy can lob over a high volume of vastly cheaper rockets costing less than $1,000 each and rack up an ever-escalating financial burden for Israel each time Iron Dome deploys in defense.

During the last conflict, Israel had to defend against Palestinian groups lobbing more than 1,400 rockets.

Israel says militants have fired about 1,380 rockets over the past nine days – so the cost of using the Iron Dome system stacks up.

This week the Senate Appropriations Defense Subcommittee approved a bill that would provide an additional $621.6 million for the Iron Dome system and Israeli missile defense.

How good is the Iron Dome?
What does a billion dollar-plus investment get you? With a reported success rate around 85 percent, the system receives regular praise from the Israeli military and others.

Iron Dome has been repeatedly credited with preventing Israeli deaths. US Chairman of the Senate subcommittee Dick Durban recently stated that “it works.”

Some missile defense experts, however, like MIT Professor Theodore Postol, have questioned the validity of Israel’s Iron Dome success rate claims and believe this could be as low as five percent.

As the conflict continues, though, Iron Dome and the other layers of Israel’s missile defense looks set to continue their crucial role.