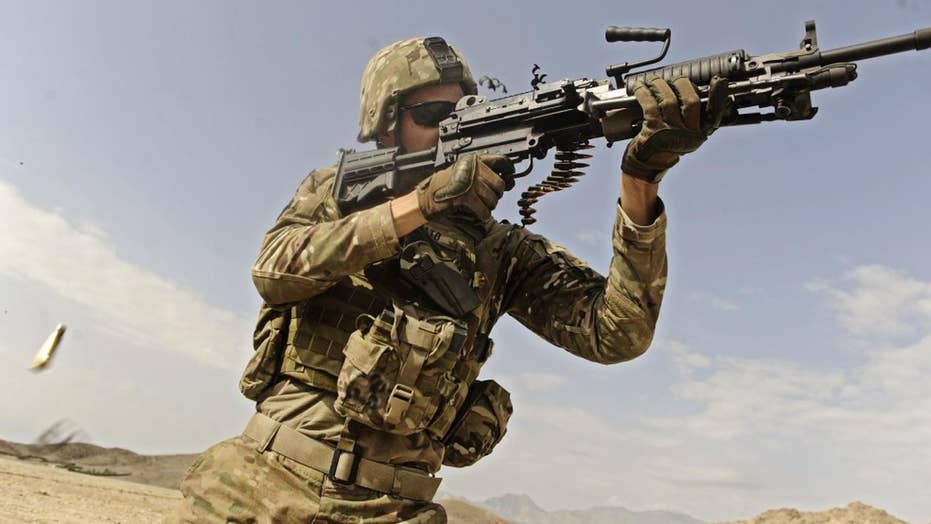 Fox Firepower: Defense Specialist Allison Barrie with a closer look at the Army Research Lab's program to develop a 'bionic third arm' which would allow soldiers to carry bigger and heavier weaponry into the field.

Will future Soldiers be kitted up with a futuristic exoskeleton-style arm that will bring even more deadly, more powerful weapons into battle?

The U.S. military has been pioneering lots of advances in exoskeletons – real-life versions of what you see Tony Stark wearing as Iron Man. By merging man with machine, exoskeletons have the potential to massively increase a warfighter’s firepower, strength, speed, endurance and much, much, more.

Special Operations Command (SOCOM)’s Tactical Assault Light Operator Suit (TALOS) full body exo project has been blazing away and a regular in headlines. Meanwhile, other military teams have been also applying their brains and talent to help our troops by finding other ways to use exoskeleton solutions to give American warriors another advantage in combat.

The Army Research Laboratory has been quietly working away on a futuristic sort of bionic arm – this is not one that a soldier puts his arm inside to operate. Instead, this would provide the soldier with an entire additional arm made out of advanced materials – hence the project being dubbed “The Third Arm.”

Will this robotic looking arm be firing rounds by itself?

You can’t help but wonder if this robotic looking big arm will be gunslinging and shooting off rounds all by itself.

The Third Arm will not be shooting any weapons at this time – although that would definitely be something to see – the goal of this project is different.

So what does it do?

This new arm can already carry current weapons for soldiers. “Third Arm” transfers the weapon’s weight from the soldiers’ arms to their torsos.

The new tech could help reduce fatigue, but the team also believes it has potential to improve shooting accuracy too.

The strain on arms and shoulders holding say, a 20 pound-plus weapon for a long time, takes a toll on the muscles. When muscle fatigue hits, muscles can tremble, arms move… and this can of course affect shooting accuracy.

There are hopes this “Third Arm” could not just boost accuracy and lethality, but also reduce recoil and burden. Soldiers often have to carry an obscene amount of weight. The arm could help make carrying a weapon as comfortable as possible.

And in the future, soldiers could use the arm to carry next-gen big, deadly weapons into battle.

What if future versions of the arm are even stronger and support more weight? Well, it could open the door to dismounted troops having heavier more powerful weapons literally to hand.

Take, for example, the mighty M2 lobbing .50 cals., which can be extremely handy in a firefight. But it can weigh about 85 pounds.

US ARMY TANKS GET FUTURISTIC SHIELDS TO DESTROY INCOMING THREATS

The military has been exploring new ways to integrate M2s into missions. One option is mounted on a robotic ground drone following the team like a dog and toting it around for them, but another could potentially be “the third arm.”

Say an enemy plane or helicopter flies close to the ground to attack U.S. soldiers, the M2 .50 Caliber Machine Gun could be vital in taking that aircraft out of the fight and protecting the force.

Imagine if a soldier could easily carry an M2, then the power would be right in his hands to not just destroy enemy aircraft but potentially take out light armored enemy vehicles charging at his fellow soldiers, for example.

What weapons could it work with?

The arm is compatible with the M4 carbine and another is the Squad Automatic Weapon or the “SAW.” Another option could be the heavy breaching saw.

The mighty M249 light machine gun weighs about 27 pounds and the also widely-used M4 is about 7.5 pounds. For long firefights, patrols, missions….those 27 pounds – or even 7.5 pounds - can feel heavier and heavier day after day. The Third Arm tackles that dynamic and offloads some of that weight from the arms to the torso.

Will this “third arm” bring shields back in vogue for warriors?

Today’s military? Not so much. They can be vital for tasks like riot control or bomb defusing, but platoons of soldiers are not roaming around with shields.

The team at the Army Research Laboratory is looking at the Third Arm carrying a shield for soldiers. It would provide a layer of protection in addition to body armor. Will a ‘Captain America’ approach work for the way wars are fought today? It will be interesting to see how modern soldiers find ways to use shields.

Currently, the Third Arm weighs about 3.5 pounds.  Compatible with the tactical vest, it attaches to the soldier’s back to offload the weight. In the front, the arm itself connects to the Picatinny rail on a weapon. It can attach on either the left or right side.

When would Third Arms head into battle?

This interesting project is in very early days, but has already made great strides.

ARL is always very good about listening closely to feedback from soldiers and Third Arm has already benefited from soldier input and feedback.

It is expected that even more soldiers will get the chance to try it out and provide feedback in future testing.

As the Third Arm advances towards potential deployment, it will need to be tested against realistic battle scenarios and conditions. It will be very interesting to see how it performs in situations where a soldier needs to shoot on the move or shoot moving targets.

How will a Third Arm come into play when a soldier needs to provide immediate medical assistance to a buddy? Or if he needs to instantly take an unconventional shooting position? Will the futuristic arm be effortlessly out of the way?

What is it like to run with a big bionic extra arm? Does it adversely impact a soldier’s speed, agility or reaction time?

The ARL team will be working on solutions to ensure this device is rugged enough to withstand combat life and compatible with all these sorts of realistic scenarios downrange.