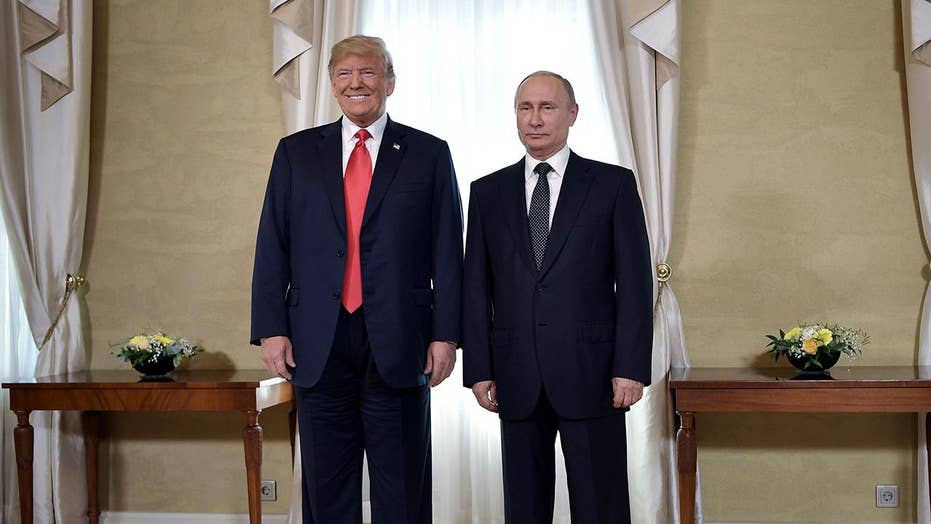 President Trump, after being questioned by a reporter on if he believed U.S. intelligence or Vladimir Putin's denial about meddling in the 2016 election, says he has confidence in both parties; John Roberts reports on the takeaways from the post-summit press conference.

President Donald Trump was trolled by Dictionary.com Monday with the tweeted definition of “traitor” after his extraordinary joint press conference with Russian President Vladimir Putin in Helsinki.

Trump came under fire for his performance in the press conference, with critics on both sides of the political aisle slamming his handling of questions about alleged Russian meddling in the 2016 U.S. presidential election. Standing next to his Russian counterpart, Trump openly questioned his own intelligence agencies' conclusions that Moscow was to blame for meddling in the election to Trump's benefit and seemed to accept Putin's insistence that Russia's hands were clean.

In a tweet, former CIA director John Brennan described the President’s performance in the press conference as “nothing short of treasonous,” and his comments as “imbecilic.”

In response, Dictionary.com tweeted that searches for the word “imbecilic” on it platform are rocketing.

Shortly after, the site also tweeted definitions of the words “patriot” and “traitor.”

The White House has not yet responded to a request for comment from Fox News.

During the press conference, Putin said he did indeed want to Trump to win the 2016 — because of his policies — but took no action to make it happen.

Putin also suggested Monday that Moscow and Washington could jointly conduct criminal investigations into a dozen Russian intelligence officials accused of hacking during the 2016 U.S. election campaign — an idea Trump hailed as an "incredible offer."

The press conference closed out the Trump-Putin summit, in which the American president delivered what amounted to a warm embrace to the man who for years has been isolated by the U.S. and Western allies for Russia's activities in Ukraine, Syria and beyond.

U.S. Sen. John McCain slammed Trump following the press conference. “The damage inflicted by President Trump’s naiveté, egotism, false equivalence, and sympathy for autocrats is difficult to calculate. But it is clear that the summit in Helsinki was a tragic mistake,” he wrote, in a statement.

The Arizona Republican and Chairman of the Senate Armed Services Committee added that Trump is unwilling to stand up to Putin. “He and Putin seemed to be speaking from the same script as the president made a conscious choice to defend a tyrant against the fair questions of a free press, and to grant Putin an uncontested platform to spew propaganda and lies to the world,” McCain added.

The summit began just hours after Trump blamed the United States — and not Russian election meddling or its annexation of Crimea — for a low-point in U.S.-Russia relations.