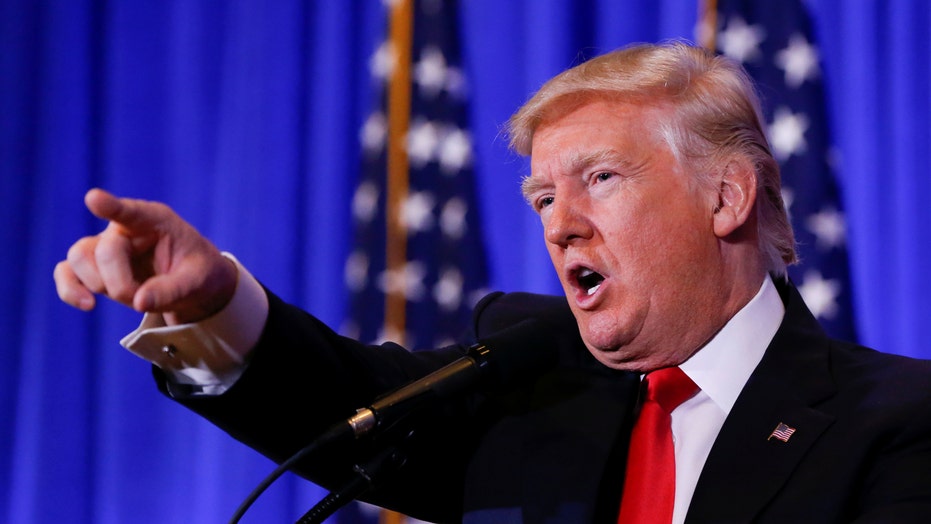 Apple is playing defense after the Department of Justice requests access to the Pensacola shooting suspect's phones; Griff Jenkins reports.

President Donald Trump has slammed Apple over the tech giant’s refusal to unlock iPhones used by the shooter who killed three U.S. sailors and injured eight other people at Pensacola Naval Air Station.

“We are helping Apple all of the time on TRADE and so many other issues, and yet they refuse to unlock phones used by killers, drug dealers and other violent criminal elements. They will have to step up to the plate and help our great Country, NOW! MAKE AMERICA GREAT AGAIN,” Trump tweeted Tuesday.

The Department of Justice has asked Apple to help extract data from two iPhones that belonged to gunman Mohammed Alshamrani, a Saudi Air Force officer. The iPhones include one that authorities say Alshamrani damaged with a bullet after being confronted by law enforcement during the shooting on Dec. 6.

“We have asked Apple for help in unlocking the shooter’s phones,” said Attorney General William Barr, on Monday. “So far, Apple has not given any substantive assistance. We call on Apple and other technology companies to help us find a solution so that we can better protect the lives of American people and prevent future attacks.”

In a statement Monday, Apple rejected the claim that it has not provided substantive assistance in the investigation. It said it has “produced a wide variety of information” as part of the probe, including iCloud backups, account information and other data about transactions.

The iPhone maker said it only learned last week that the gunman had a second iPhone and that the FBI had been unable to access the devices. The company said its engineers had a call with the FBI to “provide additional technical assistance” and it would continue to cooperate with investigators.

“We have always maintained there is no such thing as a backdoor just for the good guys,” Apple said, in its statement. “Backdoors can also be exploited by those who threaten our national security and the data security of our customers. Today, law enforcement has access to more data than ever before in history, so Americans do not have to choose between weakening encryption and solving investigations. We feel strongly encryption is vital to protecting our country and our users' data.”

“A federal judge has authorized the Department of Justice to access the contents of the dead terrorist’s phones. Apple designed these phones and implemented their encryption. It’s a simple, ‘front-door’ request: will Apple help us get into the shooter’s phones or not?” said Kerri Kupec, director of the DOJ Office of Public Affairs, in response to Apple’s statement.

Investigators have been trying to access the iPhone 7 and an iPhone 5 — but have been unable to access them because the phones are locked and encrypted, according to a letter from the FBI’s general counsel, Dana Boente. The FBI has received a court authorization to search the phones and the devices have been sent to the bureau’s lab in Quantico, Virginia, he said.

The investigation is considered a “high-priority national security matter,” Boente said in the letter.

FBI officials have sought help from other federal agencies and other experts, and investigators have been trying to guess the passwords, but those efforts have been unsuccessful, according to the letter.

The ACLU has voiced its concern over the government’s request to Apple over the Pensacola shooter’s iPhones.

"The government’s demand is dangerous and unconstitutional, and would weaken the security of millions of iPhones,” explained ACLU Surveillance and Cybersecurity Counsel Jennifer Granick,  in a statement emailed to Fox News. “Strong encryption enables religious minorities facing genocide, like the Uyghurs in China, and journalists investigating powerful drug cartels in Mexico, to communicate safely with each other, knowledgeable sources, and the outside world. There is simply no way for Apple, or any other company, to provide the FBI access to encrypted communications without also providing it to authoritarian foreign governments and weakening our defenses against criminals and hackers."

This is not the first time that Trump has stepped into an iPhone security row. In 2016, the then-presidential hopeful called for a boycott of Apple products over the tech giant’s refusal to comply with a judge’s order to help hack the phone of a shooter in the deadly San Bernardino terror attack.

The FBI eventually broke into the San Bernardino gunman’s iPhone without Apple's help.