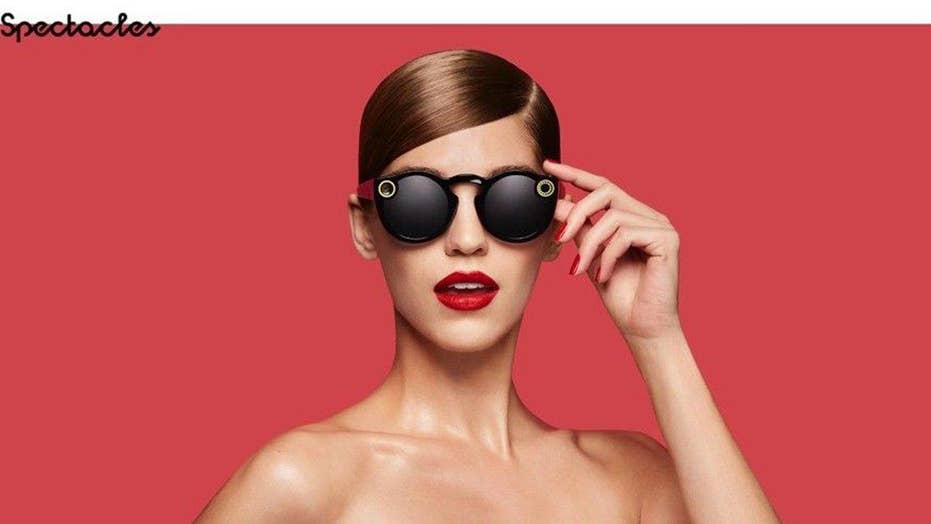 Would you buy Snapchat sunglasses?

Spectacles from Snapchat developer Snap is grabbing a lot of attention. The fact that Spectacles are so hard to come by — they're sold only through a vending machine that pops up in a new location with little notice — has added to the hype.

Spectacles are camera-equipped sunglasses that let you record 10-second circular videos you can share on your Snapchat account. The camera has a 115-degree field of view and a ring of LED lights blinks on one of the lenses to let people know they're being recorded. A few tech writers have gotten their hands on a pair, and the response so far has been quite positive.

Matthew Panzarino of TechCrunch was one of the first tech writers to share his Spectacles impressions and count him as a fan. "Spectacles are one of the coolest, most fun bits of hardware I've used lately and I just scored an NES Classic," he writes.

"The circular video is a revelation. When shot with Spectacles and displayed in your camera roll, it's a circular disc. When viewed in Snapchat, the video fills the screen and as you rotate your device you get a smooth transition from vertical to horizontal, allowing you to see more of the image than if you'd just done one or the other."

"Having your hands free to manipulate or hold or touch or help while you're taking a snap is so great. It also greatly increases the sense of 'place' that you get out of it."

MORE: How to Get Spectacles

"The glasses did drop Bluetooth connection at very short ranges and the transfer of snaps is too slow. Even the Wi-Fi mode, manually enabled, for transferring 'HD' snaps is not all that zippy."

Raymond Wong at Mashable compares Snap's glasses to Google Glass, and Spectacles comes out ahead in that comparison. "Whereas Google Glass tried to cram a computer and the entire internet literally on your face and in front of your eyes, Spectacles just has a camera for recording moments," Wong writes.

"Once I stopped planning out what to record and just learned to spontaneously press the record button when I wanted to save a moment and then move on, then — and only then — was I able to appreciate how Spectacles liberated me from all the time I would have been spent on production."

"What Spectacles aren't for is recording yourself. In other words: no selfies (or video selfies, specifically). ... It's not a deal breaker for me since my Snapchat Story tends to be a good mix of both vlogging-style Snaps and first-person. But if you're mostly about the selfie life, Spectacles aren't for you."

"Battery life could be better — Spectacles are only good four about 100 video Snaps, which I easily burned through in an hour...So you'll definitely want to hold onto the case, which holds four charges (about 400 Snaps) and a battery pack to charge up your phone if you plan to use them all day."

Writing for USA Today, Jefferson Graham praises the simplicity of the Spectacles experience. "The glasses are stylish and a whole lot of fun. Snapchat has done a great job at making the operation drop-dead simple."

"Spectacles is a fun toy, and easily the must-have gift of the holiday season — if you can find one."

"The clips are low-res and really jerky — shooting from your eyes doesn't allow for any steadiness help from the hands."

"If used at a party or other evening gathering, the video quality will be pretty poor; at least it was for me when I shot inside. (The camera does better in daylight.)"

Scott Buscemi promises a more in-depth review at 9to5 Mac after he spends more time with Spectacles. But his initial impressions are largely positive.

"The entire setup experience is swift and easy to understand, the lack of on/off button makes it seem like regular sunglasses that just so happen to record a video when you press a button, and the charging case makes it so this thing can last for a good while."

"The goal of Spectacles is to keep you in the moment and two-handed while allowing you to capture what's happening in front of you. For me, it means I can record cool things while still maintaining control of my bike."

"[Spectacles] automatically imports SD versions of your videos, and you have to connect to the Wi-Fi network it creates if you want to import HD videos. This... takes a while."

Bryan Bishop of The Verge says he's spent a little time with the glasses, and "I don't think I'm ever going to give my Spectacles up."

"Pulling them out of the case for the first time, I was pleasantly surprised by just how slim and light they are."

"To let those around you know you're shooting, a tiny ring of LEDs on the front left of the glasses swirls during recording. The whirl is a whimsical touch...And capturing is so dead simple it lets you grab moments without even having the chance to overthink or plan."

"Bluetooth syncing is rather slow, and while Spectacles do take advantage of Wi-Fi syncing for higher-definition versions of clips, that implementation involves the extremely clunky step of jumping to your iPhone's settings app and changing your Wi-Fi network to a hotspot generated by the Spectacles themselves."