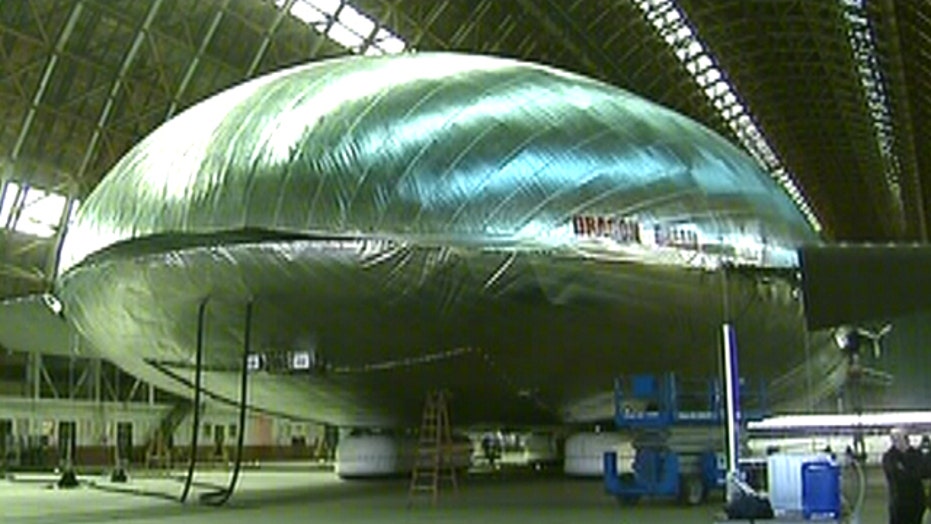 Blimps and Zeppelins plied the skies in the early part of the 20th century, carrying passengers and cargo and even serving as military aircraft during the World Wars. But it didn't take long for airplanes to replace dirigibles for commercial and military flight and by the middle of the 20th century, airships were mostly used for advertising, sightseeing and surveillance.

But blimps may be back. Montabello, Calif.-based Aeros is working on a rigid airship that can fly like a plane and float like a balloon. If realized, the 500-foot-long Aeroscraft would greatly alter the way cargo is shipped. The craft is designed to take off vertically and cruise at up to 130 mph at an altitude of 12,000 feet. It will be able to travel thousands of miles on a single tank of fuel, carrying 66 tons of cargo -- that's three times the capacity of a C-130 and half that of the C-5, the largest military aircraft flown by the United States.

"This vehicle doesn't need infrastructure," Munir Tojo-Verge, the flight control systems engineer at Aeros, told Discovery News. "It could even land on water."

The Aeroscraft could serve both military and humanitarian efforts, delivering extremely heavy loads to areas without transportation infrastructure, such as roads, train tracks or airports.

Aeros recently tested a 230-foot-long prototype and has received $35 million from DARPA and NASA to get a full-sized version off the ground.

The Aeroscraft has a rigid shell made of a lightweight, carbon-fiber composite and has special honeycomb-like chambers designed to hold helium. The helium is housed separately in compression tanks. To fly, the compressed helium is released into the chambers. To sink, the helium is pumped back into the tanks and replaced with air. That eliminates the need for ballast. And because helium is nonflammable, there is no risk of a Hindenburg-like explosion.

The gas pressure inside isn't much different from the outside air, so even if one were to put a hole in the skin of the Aeroscraft, the gas wouldn't escape very fast. Blimps, by contrast, are under high pressure, so they deflate much faster.

A set of turboprop engines like those on a plane provide thrust, combined with another type that Tojo-Verge said he could not discuss. The airship's arrowhead shape keeps it stable at higher speeds and helps give it lift.

All this makes the Aeroscraft much different from blimps, which are basically flexible, helium-filled balloons outfitted with propellers to move and steer, or zeppelins, which have rigid frames containing lots of small, helium-filled balloons called ballonets. Both types of airship need ballast and are difficult to maneuver in rough weather. The zeppelins of the 1930s also needed ground crews with ropes to wrangle the craft to the ground. The Aeroscraft won't require that.

For cost and capability, the Aeroscraft compares well with helicopters. The biggest helicopter available now is the Sikorsky Skycrane, which travels at 126 mph and is able to carry 10 tons. These copters are often used in rescue missions and to carry heavy equipment. But they cost a lot to operate and their range is only 230 miles with a maximum load of fuel. The Aeroscraft will have a similar speed, carry much more cargo and be able to travel much farther.

While the Aeroscraft is technologically advanced, the next step is making airship transport a viable business, which may be harder than it sounds. Jose Holguin-Veras, director of the Center for Infrastructure, Transportation, and the Environment at Rensselaer Polytechnic Institute, said it would take a lot of airships to make a dent in the service area they aim to fulfill and he's skeptical that the market will be large enough to give way to that many vehicles.

He cited the 2010 earthquake in Haiti as an example. Some 316,000 people died, 300,000 were injured and about 1.8 million people needed immediate food and supplies. Getting enough supplies to Port-au-Prince would have required hundreds of Aeroscraft airships -- each one capable of carrying enough cargo for only about 3,000 people. Most of the supplies were delivered by truck from the neighboring Dominican Republic because even with the airport out of commission there was enough roadway left to get the supplies in after they were flown to Santo Domingo.

Airships may have a role for disasters in remote locations, Holguin-Veras said. "Maybe for something like a blackout in Vermont in winter," he said, where roads were impassable and the airport wasn't working, and the amount of cargo needed was small. In that case an Aeroscraft might deliver a generator or two, or fuel for a small town.

In terms of cargo-shipping, the Aeroscraft may not be able to compete with ocean ships or trains, Holguin-Veras said. Shipping of any kind is a tradeoff between how fast cargo has to move, how much can be carried and the cost of moving it. A plane is an expensive way to send anything, but it goes fast enough that high-value, perishable cargo is worth sending. The flower industry is a good example of this: flowers need to get to their destinations quickly and aren't shipped in high volumes. Meanwhile, a load of iron can sit in a cargo hold for a weeks-long journey, and a ship will carry tens of thousands of tons.

In order for the Aeroscraft to be competitive, it would need to carry cargo that wasn't perishable or didn't need to be delivered immediately. That limits the market it can service

And even though it doesn't need a fully equipped airport, future versions of the Aeroscraft able to carry hundreds of tons will be hundreds of yards long, necessitating a big, clear area. So shipping to city centers is less realistic.

Other companies have tried to make airships viable. Northrop-Grumman has developed an airship for surveillance for the U.S. Army. Meanwhile Cargolifter, a German company, tried to design and build an airship that could carry 176 tons. The company declared bankruptcy in 2002. Cargolifter sill exists, but it is selling a balloon-based crane system rather than a cargo-carrying dirigible. Lockheed-Martin designed and built a prototype for the Army as well, the same contract that Northrup-Grumman won. Now called the SkyTug, the rights to the design were taken over by a Canadian company, Aviation Capital Enterprises.

Jojo-Verge said Aeroscraft isn't trying to compete directly with other modes of transport, but to address markets that are more difficult for trucks or planes. Remote areas is one of those -- there are many places, he said, that have poor road connections and where an Aeroscraft carrying 66 tons would be more efficient than a truck picking its way through a remote trail. If anything, the Aeroscraft might just be in the "sweet spot" that other cargo methods don't handle well.

In addition, Aeros plans to build bigger airships. "The thing is, our design gets more efficient as you get bigger," Jojo-Verge said. A 200-ton Aeroscraft would not use much more fuel than the 66-ton version, and it would go just as fast.

And he sees disaster relief as a good initial market. "Imagine an earthquake in L.A.," he said. "You could get one of these in anywhere in the city." While it won't ever be as cheap as a truck or train, it's faster than a cargo ship. "We're trying to fill a gap," he said.