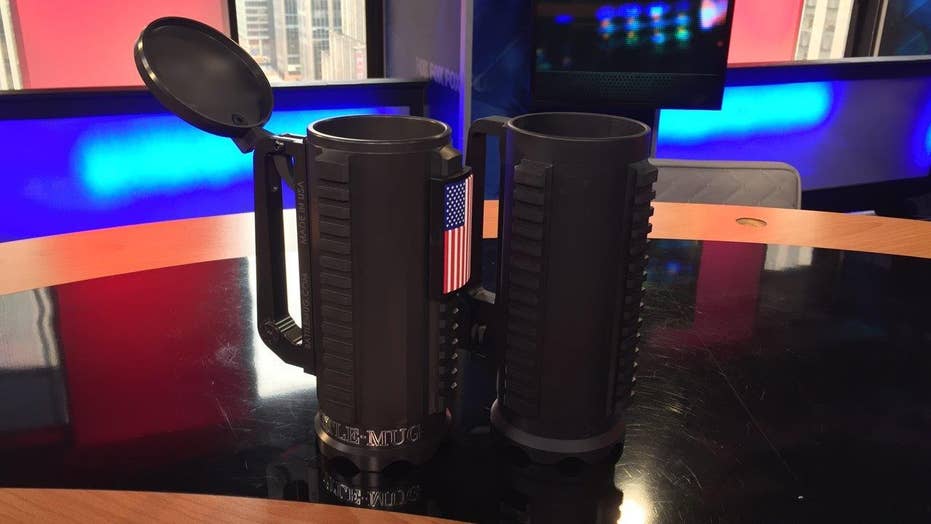 Father’s Day is around the corner. Here are six of the best Father’s Day gifts that will help your dad get tactical with his beverages, whether it is a beer with his buddies or a coffee first thing in the morning.

The beer hoister called the Battle Mug starts life as a 13.5 pounds hunk of 6061 T6 billet aluminum.  At a facility that makes stuff for the Department of Defense, NASA, the U.S. Space and Rocket Center, and weapons manufacturers, this hunk of metal transforms into the Battle Mug.

The handle? A standard M4 carry handle – on a mug.  Like weapons, Battle Mug uses an M1913 rail system. The rails can be used to attach the same things to the mug as you can on a weapon, like optics.

Related: Be prepared for anything with these 5 survival tools

Whether charged with coffee or beer, this mug makes a statement. Whether it is perched next to Solo cups at the BBQ, or coffee mugs lined up at the office, this brawny specimen will make everyone else’s beverage holders look a whole lot more puny.

The company will also engrave it for you to personalize for your father.  The original is available for $189.00 and it comes in polymer for $45.00.

American Marauder makes uber popular gear that you’ll see on Special Operators at BBQs not just all over this country – but all over the world.

Hook your dad up with gear from a company that the insiders in covert circles go to for cool stuff. For any dad who fuels each morning with caffeine, a mug is a chance to bring a smile to your dad’s face when he has his cup of Joe.

If you come from a military or law enforcement family, there are lots of inside joke options and serious ones tailored to deftly represent your father’s area of military service too.

“Coffee Badge,” “Triple Threat,” and more— there are fun options galore to upgrade your dad’s coffee to tactical standards.

Kit your dad out in the Rolex of tactical drinking systems – ideal for dads who roll with their buddies on the move outdoors.

The YETI Coolers Hopper 20 will keep 18 of your dad’s beers frosty whether he is out fishing in blinding heat for hours or catching up with buddies around the campfire.

Field Tan is the perfect new color, just introduced in the Hopper.

At $299.00 this is an investment piece for sure, but one that he will have and love for a lifetime. Pitch in with your siblings as a team effort this year to make your dad the envy of all his buddies – simple as that.

What to give the father who seems to have everything camo for his hunting?

Solution: Oakley shades in multicam from the Kings of Camo. This is the ultimate finishing touch for the camo-clad dad.

For dads on a mission to enjoy some beers with their buddies in the backyard, the conditions can get extreme— that sunlight can get awfully fierce— so gear him up with these tacit-cool shades so he can soldier on.

Is your father more sports, and less hunting?

The Shooter Cap is another sun blocking tactical system that will keep that brutal sun out of his eyes while he’s watching a game, and the shirt is quite simply tacti-cool for any dad to wear anywhere.

Kicking back indoors to watch the game with family and friends can also be fraught with peril. What dad hasn’t faced the dreaded drink rings on the furniture?

Help your dad defeat those coffee table booby traps with a gift that hails from a company named after Ares, the Greek god of war. Made from slate, these coasters benefit from the ultra craftsmanship of Ares Gear – a company that designs gear for the toughest demands and standards of Special Operations warriors.

Ares will personalize these ultra cool morale items for your father. Or you can go for pre-engraved crowd-pleasing options like the Will Rogers series with quotes like “Be thankful we're not getting all the government we're paying for“ for a dad into politics, or the Mark Twain series including “Go to Heaven for the Climate and Hell for the Company” for dads who like heartland home truths.

The elite tactical craftsmanship makes this gift look like an investment piece that cost you a mint, but it's an absolute steal for $14.99. It's a gift he will get to enjoy regularly and your mom and the furniture will thank you for it, too.