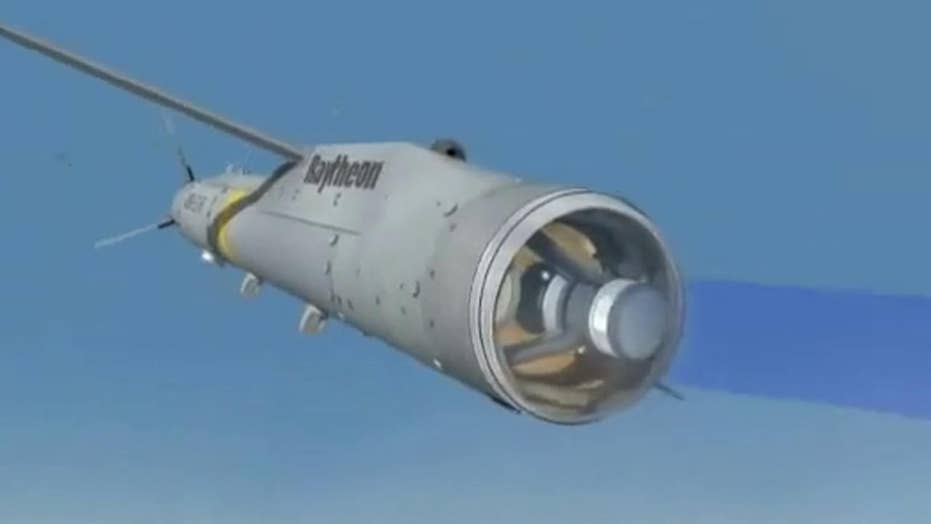 Defense specialist Allison Barrie has an inside look at the new StormBreaker, a missile that can seek out targets in spite of bad weather in the battle space. Enemies of the United States will never be able to use bad weather to hide from the US military again.

Enemies of the United States will never be able to use bad weather to hide again.

StormBreaker is a new bomb that can seek out targets in spite of bad weather in the battlespace.

Not only does it reign over all weather, around the clock…it can hunt bad guys when they are on the move or trying to escape in vehicles.

This U.S. Air Force program will give American fighters the crucial advantage of being able to precisely strike when others cannot. Made by Raytheon, the bomb is fired from fighter jets thousands of feet up, and penetrates bad weather to attack moving and stationary targets on the ground.

The F-15E Strike Eagles are the first to receive the revolutionary bomb. The F-35 Joint Strike Fighter and F/A 18E/F Super Hornets are next to be armed with these bad boys.

Before it received the moniker StormBreaker, this bomb used to go by the rather dull, drab title of Small Diameter Bomb Increment II or SDB II.

It’s an anytime, day or night, all weather bomb- and it rips away the cover of weather advantage from U.S. adversaries.

As always the recent Farnborough Airshow in the U.K. was quite a spectacle with countries and aviation companies showcasing their latest and greatest in the sky and on the ground. But arguably the most exciting news to come out of the annual event was something that was unseen – news that StormBreaker has recently moved into operational readiness testing. This signifies a crucial step closer to USAF fighter jets being armed with this mighty weapon.

For this scale of capability, you might expect it is massive in size. But this remarkable bomb only weighs just over 200 pounds. It is 70 inches long and just seven inches in diameter. Similar in size to those fun floating noodle toys found in pools, ponds and surf all around the U.S.

When weapons are large, this can mean more fighters are required to ensure the target is destroyed. StormBreakers are on the smaller side so a fighter jet can carry more of them than a bigger weapon. The fewer the fighter jets deployed against the same target, the fewer pilots put at risk.

The more distance put between U.S. forces and the enemy when striking a target the better. This bomb can be launched from more than 40 miles away, yet still strike precisely.

Why is bad weather tough?

Bad weather is an age old method of concealment and one that U.S. adversaries could use against to conceal themselves from air strikes – but not anymore.

Also in battle conditions, “battlefield obscurants” like thick dust kicked up by helicopters or vehicles could also be used to the enemy’s advantage. Explosions are also very common in the battlespace and can fill the air with the dust and debris, making visibility poor at best.

StormBreaker takes the bad weather concealment advantage away from adversaries and converts it into an advantage for the U.S. military. With this bomb, the U.S. can strike in conditions other countries cannot.

PODCAST: WHAT DO SKATEBOARDS AND FIGHTER JETS HAVE IN COMMON? LEARN HOW THE SECRET TO HOW TOP GUN PILOTS CRUSH IT + YOU CAN TOO

How does it hunt bad guys?

When visibility is limited, StormBreaker provides a powerful solution – an ultra advanced seeker.

The special seeker integrated into the weapon shares targeting data throughout the three modes of attack.

This allows the weapon to be seemingly unstoppable. It allows the bomb to accurately strike no matter the weather and no matter the amount of light. It also allows it to do so against both fixed and moving targets.

What sort of advanced tech does it use to hunt and strike?

To track an airborne laser designator from the ground or an aircraft, the weapon uses its semi active laser.

How does it attack?

With the laser illuminated attack mode, the weapon will use its laser spot tracker to strike accurately.

If StormBreaker is deployed against a fixed or stationary target, then the weapon can use coordinates with the coordinate attack mode.

Controllers (whether on the ground or in the air) can send updates while the bomb is in mid-flight if necessary. For example, if the target has moved, then the controllers can send the bomb new coordinates mid-flight and StormBreaker can adjust using tis GPS/INS system to guide its way to the new target location.

After the fighter fires a StormBreaker, the controller can also still abort the mission by updating the bomb using the link

When will StormBreakers reign over weather?

Now that the operational testing phase has begun, StormBreakers should be arming the USAF fighters fleet in the near term.

Raytheon has already integrated the bombs on the F-15E Strike Eagle. The USAF and Navy have begun integration on more aircraft. The F-35 Joint Strike Fighter may be ramped up with StormBreakers reaching initial operating capability by 2022 and the F/A 18E/F Super Hornet within about 2 years.