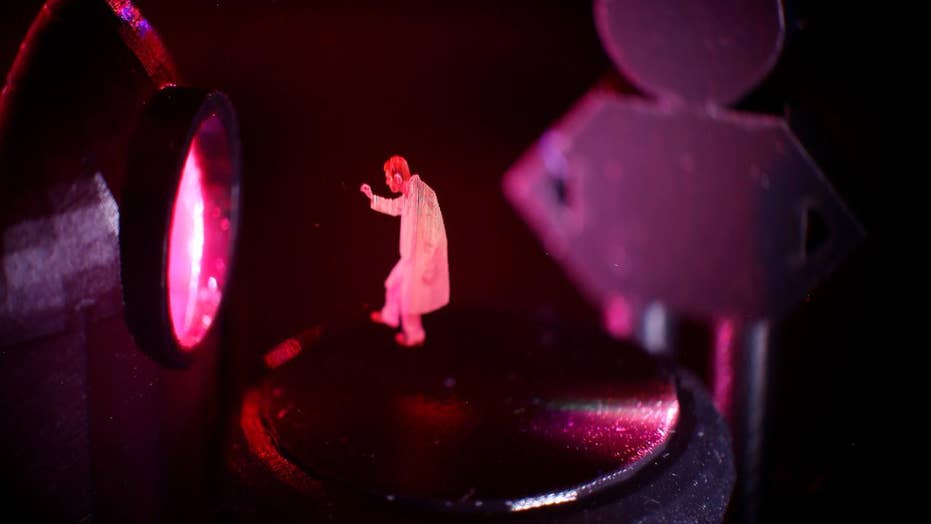 'Star Wars' holograms may be close to reality

Scientists have created 3D projections in thin air similar to those seen in 'Star Wars.'

"Help me, Obi-Wan Kenobi. You're my only hope."

While it's unlikely that the Millennium Falcon will be zipping to light-speed anytime soon or you'll be able to use the Force, scientists have figured out how to manipulate nearly unseen specks in the air and use them to create 3D images that are more realistic and clearer than holograms.

Similar to when R2-D2 beamed a 3D image of Princess Leia into thin air in "Star Wars," the technology is capable of "producing images in ‘thin air’ that are visible from almost any direction and are not subject to clipping."

DRONE RACING 'THE NEXT TYPE OF NASCAR,' PILOT SAYS

The study's abstract, even referenced "Star Wars," saying technology "most closely resembles the three-dimensional displays of popular fiction." The study was published in Nature on Jan. 24. The study was led by Daniel Smalley.

Though Hollywood celebrities won't be appearing just yet, the scientists have managed to create a small butterfly dancing above a finger, as well as a a graduate student imitating Carrie Fisher as Leia in the famous "Star Wars" scene.

Fisher, who passed away in 2016, reprised her iconic role of Princess Leia in "Star Wars: The Last Jedi" for the final time. At a box office of nearly $1.3 billion dollars, it's the second-highest grossing movie in the "Star Wars" franchise, behind only "Star Wars: The Force Awakens."

Though holograms have been around for a while, this new technique is the closest to replicating the famous "Star Wars" scene with Fisher's Leia asking for help from Obi-Wan, played by the late Sir Alec Guinness.

"The way they do it is really cool," Curtis Broadbent, of the University of Rochester told the Associated Press. "You can have a circle of people stand around it and each person would be able to see it from their own perspective. And that's not possible with a hologram." Broadbent did not work on the study with Smalley but is working on a competing technology.

Smalley, an electrical engineering professor at Brigham Young University, said the tiny specs of light are controlled with laser lights, similar to the fictional tractor beam in "Star Trek." However, it was the 2008 movie "Iron Man," when Tony Stark (played by Robert Downey Jr.) wears a holographic glove, that gave him the inspiration.

The key is trapping and moving the particles around potential disruptions — like Tony Stark's arm — so the "arm is no longer in the way," Smalley told the AP.

Other versions of volumetric display use larger "screens" and "you can't poke your finger into it because your fingers would get chopped off," said Massachusetts Institute of Technology professor V. Michael Bove, who wasn't part of the study team but was Smalley's mentor.

The device Smalley uses is about one-and-a-half times the size of a children's lunchbox, he said.

So far the projections have been tiny, but with more work and multiple beams, Smalley hopes to have bigger projections.

This method could one day be used to help guide medical procedures — as well as for entertainment, Smalley said.

Though years away from daily use, 3D holographic images are not the first technology from "Star Wars" to make their way from the silver screen to everyday life.

In 2013 researchers from Harvard University and the Massachusetts Institute of Technology demonstrated that when pairs of photons were fired through a cloud of supercooled atoms, they emerged as a single molecule. Mikhail Lukin, a Harvard University professor of physics likened it almost to a lightsaber, LiveScience reports.