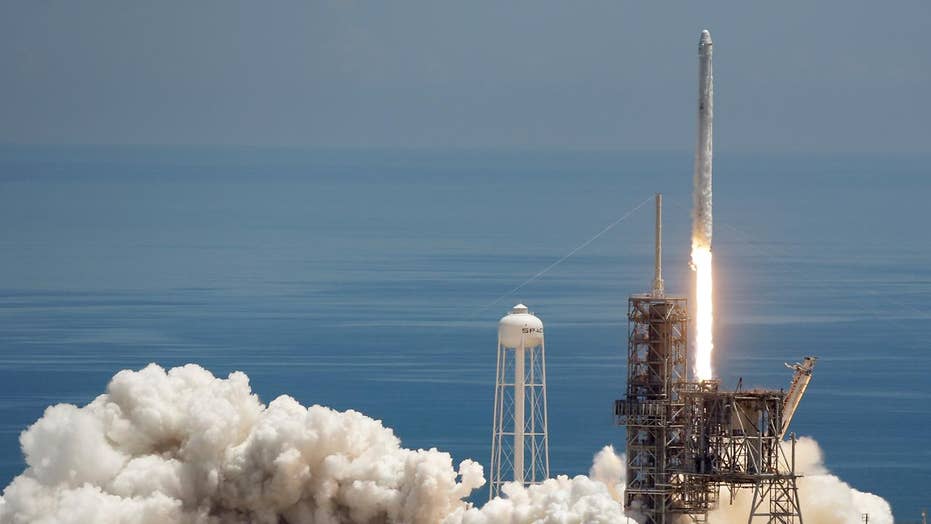 CAPE CANAVERAL, Fla. – The ice cream has taken off.

The Falcon 9 is brand new and on top of the rocket is a new Dragon cargo capsule. Space X intends to make this launch the last one that uses a Dragon that has not flown before. It’s all part of the commercial company’s cost-reducing formula, rocket and capsule reusability.

In fact, Space X’s last cargo launch, in July, was with a reused Dragon capsule, proving that after splashing down in the Pacific, the Dragons can be successfully refurbished.

After launching, the Dragon will reach its preliminary orbit and early Wednesday morning it will arrive and dock at the Station. (AP)

Packed inside the Dragon are almost 6,500 pounds of crew supplies, including food, new underwear and toilet paper, (the necessities of living 250 miles above Earth) plus hardware for the International Space Station. The cargo mission is also bringing up an extra-large treats of frozen ice cream and fruit bars for the floating men and women in low-earth orbit, a special treat from NASA to keep the astronauts happy.

It is also carrying several science investigations, including building on the success of the Cosmic Ray Energetics and Mass (CREAM) balloon flights and also new research to grow crystals in space funded by the Michael J. Fox Parkinson's Foundation. NASA said crystals grow bigger in micro-gravity and the long-range hope is that the crystal research will help lead to new treatments for people with Parkinson’s disease.

After launching, the Dragon will reach its preliminary orbit and early Wednesday morning it will arrive and dock at the Station. Space X’s 150-foot tall Falcon 9 rocket first stage will release and again descend to earth in its own controlled burn, deploying its steering fins and slowly landing upright at Landing Zone 1 at the Kennedy Space Center. The company has successfully landed 13 rockets so far and has already re-flown those refurbished rockets on a couple of satellite contracts.

Space X intends to make this launch the last one that uses a Dragon that has not flown before. It’s all part of the commercial company’s cost-reducing formula, rocket and capsule reusability. (AP)

Next Monday, as the full solar eclipse passes west-to-east over the United States, the crew on board the Space Station will get to see the moon’s shadow down on earth three separate times. The Space Station orbits the planet every 90 minutes, so the astronauts will see the shadow first on the west coast, then they’ll see the dark circle of the moon’s shadow over Kentucky and, finally, the crew will see the shaded Charleston, South Carolina area as it moves off into the Atlantic.