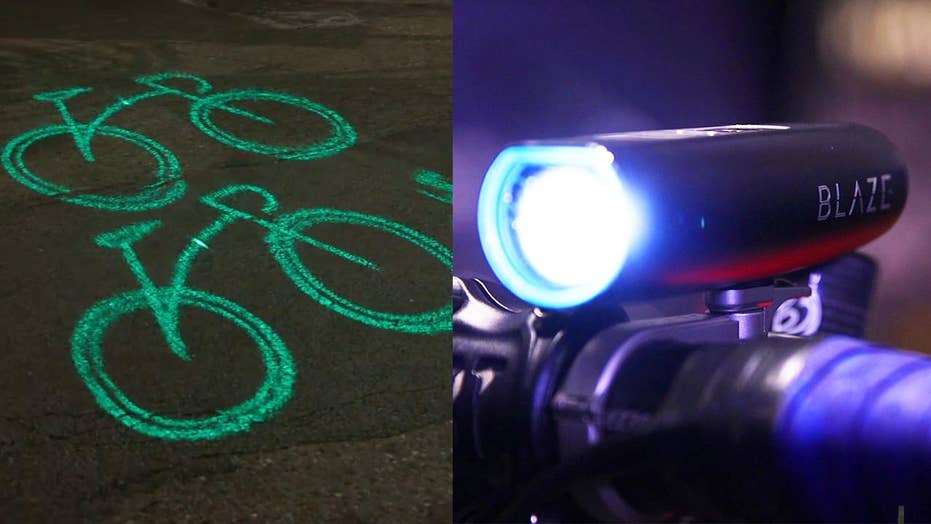 Laserlight give cyclists presence on the road

Smart & Safe Tech: The Blaze Laserlight shines 20 feet in front of the cyclists to alert motorists and pedestrians. Now New York City’s Citi Bike is partnering with Blaze to make the streets safer

Whether for recreation, health and fun or just to get to work, more and more Americans are riding bicycles. But their numbers might be even greater if the pedal-pushers felt safer on the roads — particularly at night and in cities.

Now, an innovative product is making that possible. Called the Blaze Laserlight, it projects a green image of a bike 20 feet ahead of a cyclist, alerting drivers and pedestrians that a real bike is coming their way.

The gadget is being road-tested by bike-sharing services such as Citi Bike in New York. Individual consumers, meanwhile, can buy them online.

Emily Brooke, the founder and CEO of the U.K. company Blaze, told Fox News she invented the Laserlight because she found "the cities were stressful, dangerous [and] exhausting" while bicycling.

"Other people aren't looking out for you," she said.

The Laserlight combines a white light, which complies with a British law mandating lights on the handlebars, with a laser image that gets beamed out of blind spots, junctions and situations where bicyclists can’t be seen. The laser projects a green image of a bike onto the ground about 20 feet in front of the rider.

"That gives you a bigger footprint on the road and allows drivers in front of you to see that you're there and stops them turning across your path,” Brooke said. “It tackles the most common cause of fatality, which is the blind spot."

According to Brooke, 79 percent of bicycles involved in crashes are traveling straight ahead when a vehicle turns into them. She said she chose the 20-foot distance because it's half the length of a bus, and she wanted the laser image to be green because "the human eye is most sensitive to green light."

Drivers "just see it and all they need to do is not turn, not react, not turn into the cyclist or not pull out,” she said. “People see it and go, ‘What is that?’ And that's perfect, as long as they don't make that turn, which can be potentially fatal…."

Brooke said the Laserlight alerts not only drivers, but pedestrians, too, about oncoming bikes. "One of the most obvious cases,” she said, “is pedestrians stepping off the pavement in front of [cyclists], especially when they're glued to a smartphone and they step into a bike lane. They see [the Laserlight] coming before they see you."

The Laserlight is waterproof, it clips on and off easily and it’s durable.  ("One got run over by a truck and it still works," Brooke said.) Its rechargeable battery lasts about two months between charges.

"They found that a bicycle with a Laserlight is more visible to a driver in pitch black than a bike without one in broad daylight….75 percent of [cyclists] said they felt more confident riding with a Laserlight," she said.

That's true, she added, not only in the city, but in rural and suburban areas, where bike riders feel "it's often a lot darker."

"Riding in New York comes with its challenges,” Citi Bike spokeswoman Dani Simons told Fox News. “Our streets are very crowded. People have to contend with drivers, with pedestrians, with other cyclists on the road, so the Blaze lights really help make you a little bit more visible on the streets."

She said she took a test ride with a Blaze-equipped bike and was impressed.

"I remember stopping near an intersection near where I live, and little kids are like, 'Wow, look at that. That's so cool,'" she said. "And I had other women stop me while I was riding and ask me about it and want to know where I got it and how it works."

Marketing the safety feature to women during Citi Bike’s pilot program with Laserlight is especially important to Simons.

"Right now, women make up about 30 percent of our ridership, and we think that should obviously be closer to 50 percent, which is what women are in the population,” she said. “And we think doing more visible things to demonstrate our commitment to safety and to make the bikes feel safer will be more inviting to more women.”