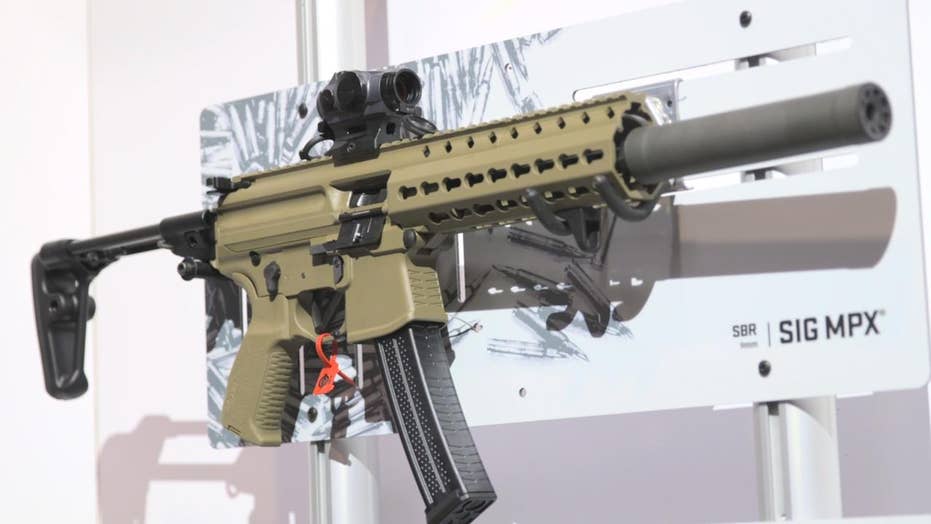 The hottest military gear for 2017

Fox Firepower: SHOT Show, the largest event of its kind in the world, kicked off in Vegas with more than 6.5 million pounds of guns, gear and exhibits for hunting, fishing, shooting and everything outdoors

More than 6.5 million pounds of guns, gear and exhibits for hunting, fishing, shooting and pretty much anything outdoors are showcased at SHOT show this year.

The Shooting, Hunting and Outdoor Trade (SHOT) Show is the place where companies reveal amazing new products that will become available to the public and law enforcement this year.

The show, which is owned and sponsored by the National Shooting Sports Foundation (NSSF), is held at the Sands Expo Center in Las Vegas. For four days between Jan. 17 and Jan. 20, more than 65,000 industry professionals will walk miles and miles reviewing the staggering amount on offer.

SHOT Show is such a mammoth event that it is the fifth-largest trade show in Las Vegas and the largest of its kind in the world.

The Scale Would Blow Your Mind

The sheer monumental scale is staggering.

SHOT Show is heaving with so many options that merely walking the aisles to window shop would mean you have to walk nearly a half marathon - there are 12.5 miles of products on show.

The event features more than 630,000 square feet jam-packed with options from more than 1,600 companies.

Buyers and creators from all 50 states and more than 100 countries have brought their latest and greatest to display and unveil.

There are thousands and thousands of products for those passionate about the Second Amendment, hunting, shooting and the outdoors. There are also thousands of options for military and law enforcement professionals.

SHOT Show is not open to the public. Attendance is very restricted. NSSF is vigilant about ensuring only industry professionals in shooting, hunting and outdoor trade can attend. Commercial buyers and sellers of military, law enforcement, and tactical products and services also attend to get business done.

NSSF rigorously enforces this policy, requiring government-issued photo identification plus documentation demonstrating direct, professional affiliation to the trade in order to get admitted.

For those permitted entry, they get a first look at the newest products before they are revealed to the public and made available.

But FOX Firepower is inside SHOT all week and has you covered. We will bring you the best of the first reveals before they become available.

First Looks at the New Products for 2017

There is something for everyone, every budget and every terrain at SHOT show in new reveals, popular favorites and-as-yet undiscovered gems.

The newest firearms, ammunition, optics, gun safes, safety locks and cases, shooting range equipment, targets and much, much more – you name it and you’ll find a range of choices at SHOT Show.

For the hunter, in addition to firearms there is the latest in apparel, game calls, decoys, tree stands, scents, lures and more on display.

The Law Enforcement section continues to grow -- law enforcement and military professionals can review more than 170,000 square feet of tactical products dedicated to them.

In addition to shopping for advances and advantages, SHOT plays an important role in networking for the community. Representatives from the military, police, FBI, SWAT and other tactical professionals have a chance to build relationships, and meet directly with companies to discuss requirements.

More than Half a Million Rounds Start SHOT with a Bang

The annual SHOT Show Industry Day was held at the Boulder Pistol & Rifle Club Monday where some SHOT attendees had the opportunity to handle, test and learn about new products.

Both current and the new 2017 firearms were put through their paces on the range. Typically, more than half a million rounds tend to be fired are fired during the Industry Day.

The event gives buyers, as well as media with expertise in firearms, the chance to get their hands on the new weapons and ammunition.

Out at Nellis Air Force Base, some of the nation’s finest tactical professionals also hit the range over at the ATAC Global Range Day. A highly popular event, it is sponsored by ATAC Global Advanced Tactics and Countermeasures, a company that provides maritime and land based security.

Easily one of the most coveted invites of the week, ATAC Global takes security very seriously and restricts attendance extremely carefully to tactical professionals and companies with relevant products. For those lucky enough to attend, they had the chance to test the latest advances for tactical professionals in guns, ammo, optics, gear, vehicles and more that will be unveiled at SHOT Show this week.

This year, the elite tactical professionals also had the opportunity to shoot against Marathon Target’s cutting-edge robots. You can go inside this exclusive event and see the action here.