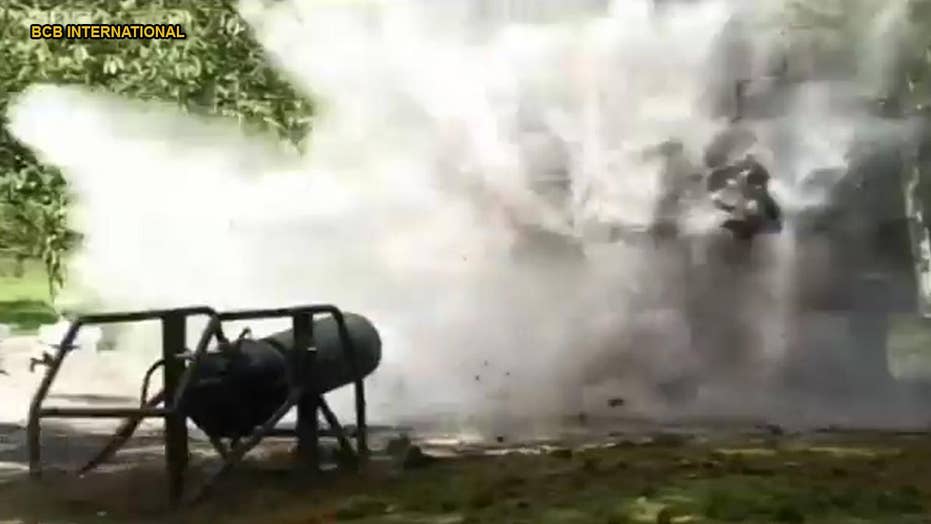 Fox Firepower: Allison Barrie with an up close look at a new cannon that could aide in active shooter situations through the use of its unbelievable ammo - water jugs.

The humble, ordinary water cooler bottle used in offices all across America becomes a mighty missile when loaded into this amazing cannon - the BCB Wall Breaker.

Without using any explosives whatsoever, the cannon remarkably uses just compressed air to blast the bottles through tough targets.

With the tragic rise in school shootings, the BCB Wall Breaker has the potential to save countless lives of American children in future active shooter situations.

For many years, BCB has had an outstanding track record innovating for Special Operations Forces.

Elite military forces, such as Navy SEALs and Rangers, have very rigorous standards. Designed for special operations, this cannon meets and surpasses those high expectations.

But on home soil, this cannon also has great potential for law enforcement and fire departments.

The BCB Wall Breaker is a tool to help provide escape for those who are trapped by active shooters in schools, held hostage in a hotel by terrorists or penned in by fire in an apartment building. These are a number of ways it could help save lives.

Ordinarily, police and military use explosives to breach walls. By using air pressure instead to launch and water bottles as ammo, breaching can be far less dangerous – especially for hostages.

Escape for students in school shootings

Fired from this amazing cannon, ordinary water bottles become powerful tools to save the lives of children in active shooter school attacks.

Imagine students barricaded in classrooms with no way to escape. The shooter is roaming the hallways. The only exit is the door to the hallway. If students tried to escape via the hallway, they could be greatly at risk.

Outside the school building, police could roll up these water cannons and quickly punch holes in the walls of every classroom providing large escape holes.

If students have been wounded, first responders can use the hole to accelerate access to medical care.

In both these instances, escape and medical care for wounded, seconds are vital and can mean the difference between life and death.

The cannon can also be useful for perpetrator apprehension. An active shooter will expect law enforcement to intervene through doors and windows. With this cannon, law enforcement can fire the cannon at any wall to create their own “door.”

This instant access at an unexpected point can provide a crucial element of surprise to stop and capture the shooter – potentially reducing risk to both the students and staff trapped in the school and first responders during apprehension.

Similar to active shooter scenarios in schools, the cannon could be useful in the event of a large-scale Mumbai-style terrorist attack where civilians are hunted and held hostage.

It could be used against terrorists using vehicles as weapons to drive at civilians in the street.

For example, cannons could be positioned in advance to protect 4th of July crowds. If a terrorist drove at the crowd, the cannon could blast the water bottle that would tear through the vehicle and stop the attack.

If fire has made stairwells inaccessible, for example, the cannon can even punch through ceilings and floors, enabling firefighters to rescue people. If the hallway is consumed with fire, it could be used to punch through walls separating apartments to gain access to those who are trapped.

Throwing a water cooler bottle by hand at a wall is not going to do much.

Such is the power of the BCB pneumatic design.  Using only air pressure – no explosives whatsoever- it turns those simple everyday water cooler bottles into formidable cannonballs, blasting holes in walls.

The water bottle is loaded into the cannon and is fired. When the bottle hits the wall, the bottle shatters spreading the kinetic energy out across a wide area. A large access hole is punched into the wall with water spraying out.

This unconventional approach to breaching walls helps to minimize the risk of injury to those who are trapped and reduces collateral damage inside the buildings too.

How powerful is the cannon?

The BCB cannon can blast through all sorts of challenges.

With mere water bottles, it is powerful enough to punch holes through pretty much any civilian wall it could ever encounter - from solid brick walls through to double layer breeze-block walls.

Metal is also child’s play for this cannon. The Wall Breaker can also tear through cars, vans and trucks with ease.

Water cooler bottles as ammo may sound too fun to be serious – but it is actually a very smart idea. This ammo is everywhere. Water coolers are found in offices, schools, gyms, malls, hotels and more all over America.

When a crisis like an active shooter in a school erupts, this means additional ammo can be readily harvested from the immediate environment if necessary.

Since they can be filled with a range of materials, the water bottles also become highly flexible projectiles that can be adapted within moments to meet mission needs.

Tailored for scale of impact and collateral damage, a water cooler bottle can be filled with sand or even dirt scooped up from a school playground to provide a different impact if necessary.

For example, water would be selected for a classroom to mitigate risk for children, but another material might be chosen for an empty gymnasium when the objective is tearing down a wall to allow a large force to enter as rapidly as possible.

How does the cannon deploy?

The Wall Breaker can be deployed in a number of ways.  One is wheeling it up by hand and it only takes one member of law enforcement to roll and fire.

For rapid agility and flexibility, the cannon can be mounted on a vehicle like the back of a pick-up truck and blast bottles from there.

In a sort of ‘castle-rampart’ style, the cannon can also be set up to defend a fixed spot.

If necessary, this BCB cannon can even be fired remotely.

The Wall Breaker’s range varies depending on factors like the ammo contents, weight, and the environment.