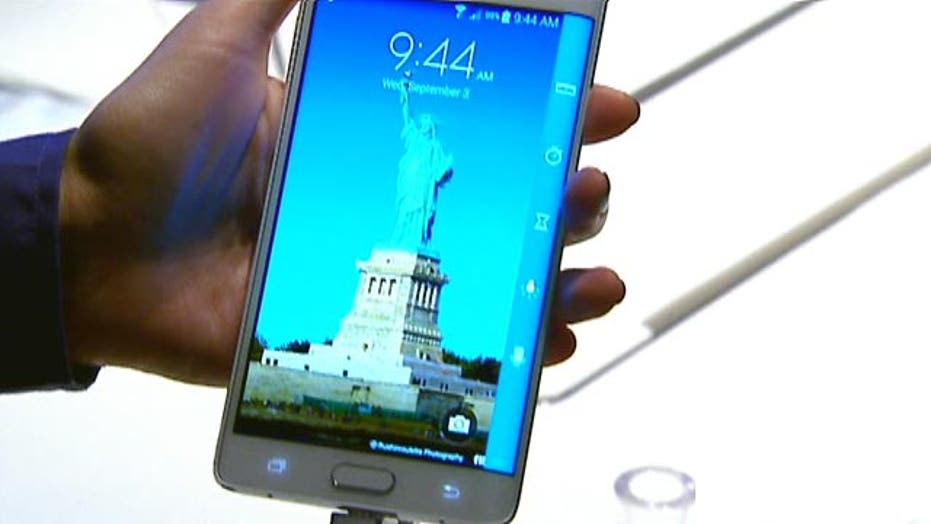 Would you buy a curved smartphone?

FoxNews.com SciTech Editor James Rogers on how Samsung hopes to shake up the smartphone market with the launch of its Galaxy Note Edge, which boasts a curved display

Samsung has unveiled the latest additions to its Galaxy Note family, launching the Galaxy Note 4 and Galaxy Note Edge devices at a glitzy event in Berlin.

A cross between a smartphone and a mini tablet, Samsung continues to push the Galaxy Note’s large screen size as a key differentiator in its ongoing battle with Apple.

With an enhanced high-definition 5.7-inch screen, the Galaxy Note 4 offers clearer and more vivid images with deep contrast, according to Samsung, as well as better viewing angles, and response times as fast as a millionth of a second.

Samsung has also enhanced its ‘Multi Window’ feature, which aims to make multi-tasking easier by accessing apps with full, split or pop-up screens and quickly altering their size and positioning.

Other enhancements include an improved fingerprint scanner and what Samsung is touting as the world’s first UV sensor in a mobile device.

Unlike the iPhone, Samsung’s Galaxy Note family also offers a stylus, or S Pen, which has also been enhanced on the Galaxy Note 4. The new S Pen offers consumers a “much more authentic pen experience,” according to Samsung, and can even emulate writing on paper with a fountain or calligraphy pen.

The Note 4 will be available in the U.S. in October with the Note Edge available later in the fall. The devices with be available at AT&T, Sprint, T-Mobile and Verizon. U.S. Cellular will also carry the Galaxy Note 4.

Keen to tap into new consumer markets, the tech giant also unveiled its Samsung Gear VR Innovator Edition, a mobile virtual reality headset, at the Berlin event. The Gear VR will be available this year, it said.

Samsung is launching its Galaxy Note 4 and Note Edge at a time of stiff competition in the smartphone market. Last week Apple sent out invitations to attend an event on Sept. 9 which is expected to mark the big debut of the eagerly-anticipated iPhone 6.

As is always the case, the rumor mill has been spinning full speed ahead of Apple’s event, with plenty of talk about a larger screen iPhone, fitness apps and longer battery life. There has also been chatter that Apple may be planning to launch 4.7-inch and 5.5-inch versions of the new iPhone.

Consumers will also be closely watching Apple’s launch event to see whether the tech giant makes its entry into the smartwatch space with an ‘iWatch’ device, although there have been reports that this may launch in the fall.