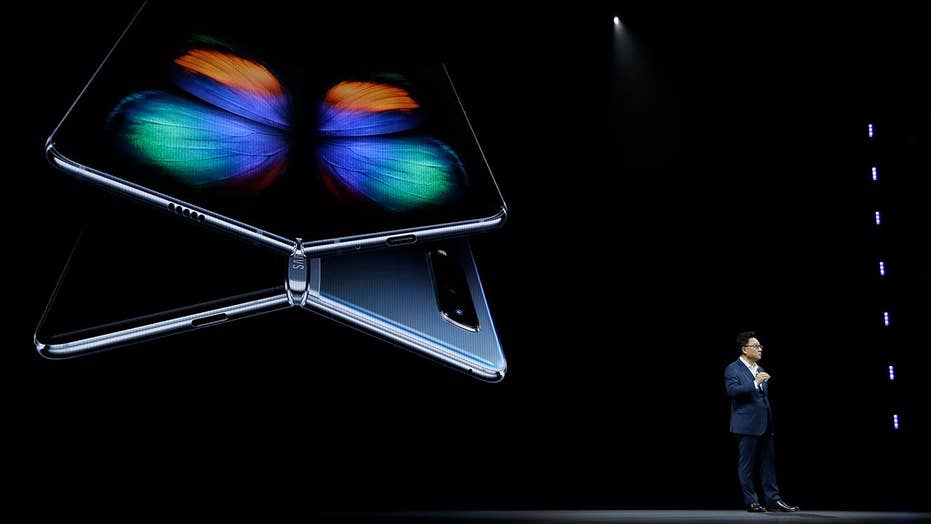 Samsung reveals the Galaxy Fold, a 4.6-inch smartphone that expands into a 7.3-inch tablet, at the company's Unpacked event in San Francisco.

Samsung today announced the nation's most expensive, and possibly most innovative smartphone: the $1,980 (and up) Galaxy Fold, a 4.6-inch smartphone that expands into a 7.3-inch tablet.

"With the Galaxy Fold we are creating a new dimension for your phone and your life," Justin Denison, Samsung's SVP of product marketing, said at the company's Unpacked event in San Francisco.

Folded, the Galaxy Fold fits easily in one hand. It unlocks with a fingerprint sensor on the side of the phone. Samsung showed the Fold running a limited selection of standard Android apps on the external screen—including email, Microsoft Office, and Google Maps—although it wasn't clear if all arbitrary Android apps will run on the outside.

Samsung showed someone opening Google Maps on the external screen, and then folding the phone open to see the map expand, something the company calls "app continuity."

With the phone open, the Fold can multitask three apps in different windows simultaneously. One appears in a larger window on the left side of the device, while two others appear in smaller windows on the right side.

"You can switch between the screens without missing a beat," Denison said.

Denison said the Fold has a "7-nanometer" processor, which probably means Qualcomm's Snapdragon 855. It has 12GB of RAM, 512GB of built-in storage and support for UFS 3.0, which doubles the phone's memory read speed. Its two batteries total 4,380mAh, and the phone supports wireless charging. The phone will come in both 4G LTE and 5G versions.

Samsung added six cameras to the device. Three of the cameras are on the back (wide-angle, regular, and 2x zoom), two are inside in tablet mode (a standard camera and a depth camera), and one is on the front when in phone mode.

The device will come in four colors (black, gold, green, and blue), and you can personalize the color of the smartphone's hinge, which enables it to bend.

This isn't the first dual-screen, or folding, phone we've seen. The Kyocera Echo, on Sprint, had two screens in 2011, and the ZTE Axon M arrived in 2017. But both of those devices had persistent bezels between their two screen panels, making using them a much less seamless experience than the Fold's single, folding screen. And neither Kyocera nor ZTE had the market clout of Samsung to get the Android developer community to embrace folding phones with multiple screens.

This year, we have already seen a folding phone from Royole, and we expect to see one from Huawei at Mobile World Congress next week.

The Galaxy Fold goes on sale on April 26, and will be available from AT&T and T-Mobile in the US.