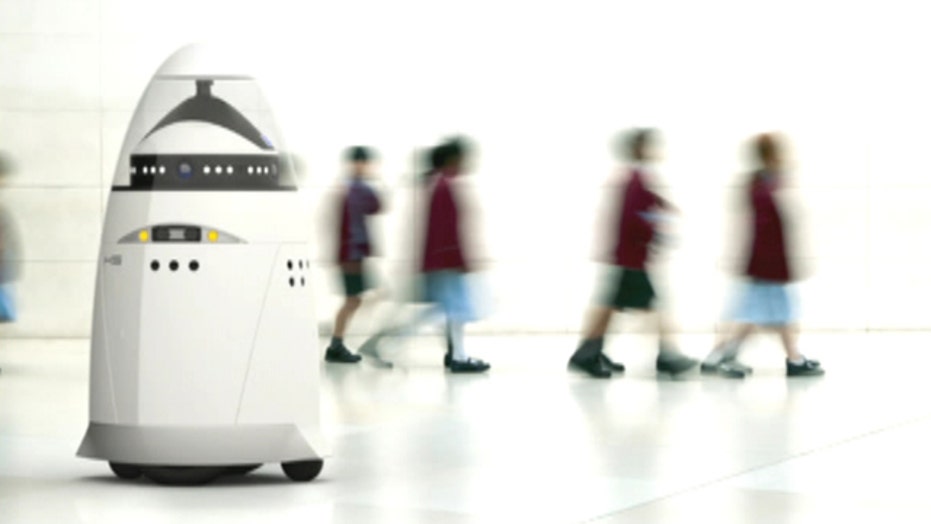 A California start-up is turning out capsule-shaped robots that it says could serve as the eyes and ears of base police units.

Knightscope officials envision its K5 system playing a role in community policing, though it’s not hard to imagine a military application – especially at a time when the Pentagon is eyeing reductions in manpower.

“Knightscope’s autonomous technology platform is a fusion of robotics, predictive analytics and collaborative social engagement utilized to predict and prevent crime,” the company states on its website. That means that in addition to sophisticated intelligence, surveillance and reconnaissance capabilities, the K5 is equipped with analytics enabling it to detect threats to people or property and summon police.

According to a recent report in USA today, the Sunnyvale-based company made its first K5 public in December. The prototype, it said, was able to scan an area in 270-degree sweeps to photographically map it. Four mid-mounted cameras can scan up to 1,500 license plates per minute, according to the report.

Some have likened the 5-foot high, 300-lb, dome-topped K5 to the mascot-like R2D2 android of Star Wars, but with a little up-armoring the “patrol-bot” would more resemble your much less warm and fuzzy Dalek of Doctor Who fame. The Predator started out as a purely ISR platform, as well.

The company did not respond to DefenseTech’s request for an interview, but so far it appears the company is not looking for Pentagon business.

It has lined up some “beta” customers among businesses and communities, it says on its website, and will test the K5s this year. In the meantime, it says it is continuing to add customers to its “growing reservations list” for future trials.

The lidar tech also provides the K5 with accurate 3D mapping of the environment and specific objects, the company says on its site.

“Is roaming a mall parking lot at 3 a.m. really the best use of an officer’s time? We don’t think so.”