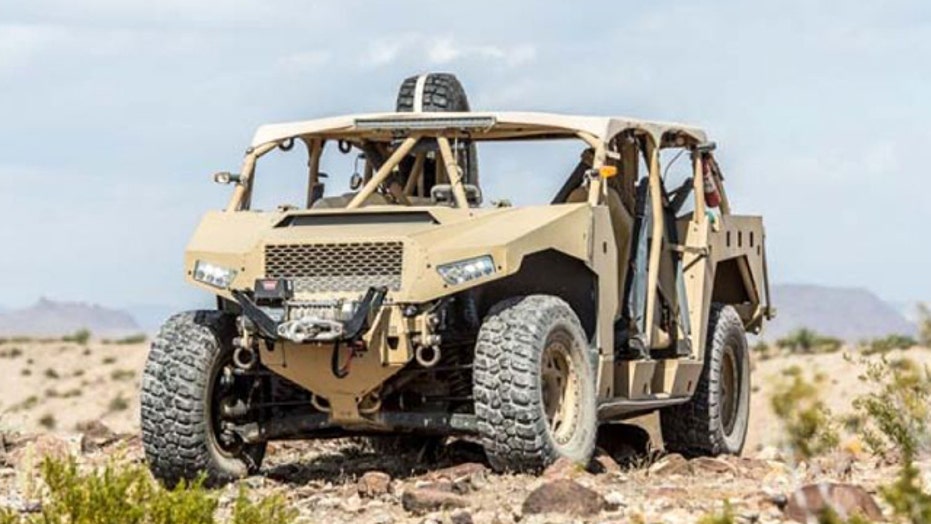 War Games: Round up from AUSA

No week focused on the Army would be complete without advances in ground vehicles, and the Association of the United States Army (AUSA) did not disappoint.

And AUSA will be one of the last times – if not the last time – that the final three contenders for the Joint Light Tactical Vehicles Army contract will appear in public at the same location.

DAGOR made its public debut at AUSA and it is one impressive vehicle.

High-speed operators must agree since Polaris has already received orders from “elements of US Special Operations Command (SOCOM)” and allied Special Forces.

Designed as a highly mobile off-road vehicle, it features some serious suspension, which makes it well suited for lugging heavy payloads in extreme off-road environments.

In the standard configuration, it seats four warfighters – two in the front, two in the back — in addition to one in the gunner’s sling seat. However, it can also be re-configured to carry a total of nine warfighters.

Crucially, this vehicle is air deployable, meaning it can be unleashed in a war zone through an aircraft’s low velocity airdrop, which is when a load is parachuted to the ground in order to guarantee as low of an impact as possible. In order to be transported from one place to another, the DAGOR can hitch a ride sling-loaded under an H-60 Black Hawk utility helicopter. It can also be delivered to a remote site along with the Sikorsky H 53 family of military helicopters or even catch a lift with H-47 Chinook cargo lifters without needing any additional modifications.

DAGOR, which is now in low-rate initial production, has a range of about 500 miles. Polaris chose to leverage a commercial diesel, JP8 engine collaborating with the Roush automotive company to give the vehicle more power.

And what about weapons? Polaris Defense says the vehicle can be configured to accommodate up to a 48-inch ring mount and pintle mounts for weapons.

The Joint Light Tactical Vehicle (JLTV) is a new vehicle that the U.S. Army and U.S. Marine Corps are keen to see become a reality.

The idea has been that it would replace the Humvee (High Mobility Multipurpose Wheeled Vehicle) with a family of vehicles with advanced protection, enhanced mobility, improved connectivity, better fuel efficiency, greater payloads and more.

The JLTV is meant to excel in three areas: infantry, general purpose, and utility.

The competition for the JLTV contract has been nothing short of fierce and is now narrowed down to three final teams: Lockheed Martin, Oshkosh, and AM General.

Last summer, each company delivered 22 test vehicles, and since then have been conducting extensive reviews and testing.

Throughout the overall evaluation process, the vehicles have gone through hundreds of ballistic and blast tests. Prototypes have been tested on the military’s severe off-road track, tackling difficult off-road obstacles like maneuvering steep inclines and declines, log climbs, hairpin turns, and gravel pits.

A final decision is expected next summer.

Given the heated competition, details on each company’s individual approach winning the contract are still confidential. Below are some of the broad strokes each team is emphasizing in order to secure the JLTV deal.

The Lockheed Martin Team’s plan for the JLTV is designed to give Soldiers and Marines a high level of mobility, transportability, and reliability while still providing warfighters with the level of protection a Mine Resistant Ambush Protected (MRAP) vehicle would give them.

The company says their design is provides more protection than that provided by the smaller MRAP vehicles currently deployed in war zones.

The company is using a Cummins turbo diesel and Allison Transmission for improved fuel efficiency.

Their vehicle design also features on-board power generation that shows promise for even more advanced capabilities as well as state-of-the-art connectivity with other platforms.

One of Oshkosh’s tagline is “Oshkosh is JLTV. Anything else is something less.”

Their public marketing focuses on three key areas of new tech they’ve developed in their L-ATV: TAK-4i, Core-10180, and C4ISTAR.

The first is TAK-4i Intelligent Independent Suspension and it promises to offer intelligent independent suspension for advanced control, mobility, and off-road performance. Oshkosh has filed a patent on this state-of-the-art tech.

For improved off-road mobility, the vehicle design has 20 inches of wheel travel, a high-performance disc braking system that is combined with an adaptable suspension that can be raised and lowered using interior controls.

The second is the Core-1080™ Crew Protection System that provides a comprehensive advanced approach to crew protection. It includes MRAP-level protection from underbelly blasts and the design allows it to be scaled up or down depending on the threat level and environment.

The third thrust in their L-ATV focuses on providing wide-ranging C4ISR capabilities. The L-ATV’s digitally controlled engine is designed for improved versatility, efficiency, and fuel efficiency.

AM General’s JLTV candidate is its Blast Resistant Vehicle – Off Road (BRV-O), which was also on show at AUSA.

In a statement released on Monday, AM General said that, since announcing delivery of 22 BRV-Os to the Engineering, Manufacturing and Development (EMD) phase of the JLTV program 14 months ago, the vehicles have been involved in intensive government survivability tests.  The vehicles are now in government Limited User Testing (LUT), it added.

The vehicle manufacturer said that BRV-Os engaged in LUT include a four-seat Combat Tactical Vehicle in three different configurations and a two-seat Combat Support Vehicle. AM General explained that the BRV-O’s crew capsule and modular armor have successfully completed all requirements for force protection in blast tests, providing protection levels similar to heavier and less mobile Mine Resistant Ambush Protected (MRAP) vehicles.

"AM General has successfully completed and/or exceeded every milestone to date throughout the JLTV program's EMD phase, including the production readiness review, manufacturing readiness assessment and design understanding review," said Chris Vanslager AM General’s vice president of business development and program management, in the statement. "We are very pleased with the BRV-O's performance and its demonstrated ability to fill the Capability Gap in Light Tactical Vehicles. Our BRV-Os will continue to demonstrate the groundbreaking capabilities this innovative vehicle brings to Soldiers and Marines during the Government's Limited User Test."

Editor’s Note: A previous version of this story stated incorrectly that GTV is in competition for the JLTV deal.