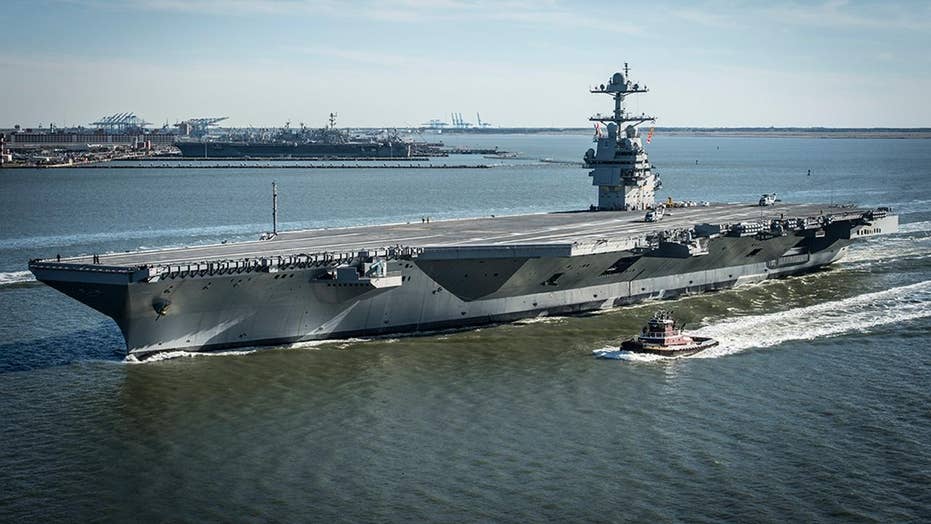 The U.S. Navy’s USS Gerald R. Ford aircraft carrier is now ready to arm its Carrier Air Wing with more bombs on a much faster op-tempo by moving weapons from the ship’s magazine up to the flight deck with their sixth Advanced Weapons Elevator.

Electronic elevators were specifically engineered and built for the Ford Class and are intended to massively step up the pace and strength of armed carrier air attack.

“LSWE [Lower Stage Weapons Elevator] 5 has given us the capacity to move ordnance from the aft magazine complex deep in the ship through the carrier to the flight deck with speed and agility that has never been seen before on any warship,” Rear Admiral James P. Downey, program executive officer for Aircraft Carriers, said in a Navy statement.

The certification of the sixth Advanced Weapons Elevator, reported by the Navy to be on-schedule, moves the ship’s readiness beyond previous delays with the elevators. Navy officials now report that the remaining five weapons elevators are on track to be integrated in time for the USS Ford’s Shock Trials planned for some time next year.

The Ford is now going through a Post Delivery Test and Trials phase intended to prepare the weapons, electronics and Carrier Air Wing for deployment. So far, the ship has launched and recovered more than 3,450 aircraft, the Navy reports.

Speculation is already mounting as to where the USS Ford might venture to on its maiden deployment, with most observers pointing to the Pacific. Certainly, when the Ford does launch, it will mark a historic occasion as the Ford-class is expected to catapult the Navy's power projection into the 2100s.

The Ford-class carriers, the first three of which are already underway, are expected to bring in a new era of carrier-based attack, in part due to new technical systems such as the advanced weapons elevators. Typically, F-18s and new F-35Cs need to be armed through a slower, less efficient process which lengthens refueling and ammo-loading.

This slows down the speed and number of sorties possible on a single mission. To improve this, the Ford-class enables a 33 percent increase in sortie rate above the Nimitz-class, and the electromagnetic catapult both reduces wear and tear on airplanes and also improves launch.

More efficient arming and refueling stations greatly change the tactical equation as they can potentially better enable multiple missions. After all, the faster attack planes are armed with missiles, bombs and other weapons, the fewer planes you need to sustain attack missions, therefore freeing up other air assets for additional operations. The weapons elevators are made possible by a drastic increase in electrical power on board the Ford-class. This is achieved by four large onboard generators helping provide the electrical power needed to propel the electromagnetic catapult, weapons elevators and other onboard electrical systems. Electric weapons elevators also help reduce the needed manpower on board the USS Ford, freeing up needed sailors for duty elsewhere. This crew reduction is made possible by increased onboard computer automation and electronic ship controls. Given its newer technical dimensions, the USS Ford operates with a crew of nearly 800 less service members than the Nimitz-class.