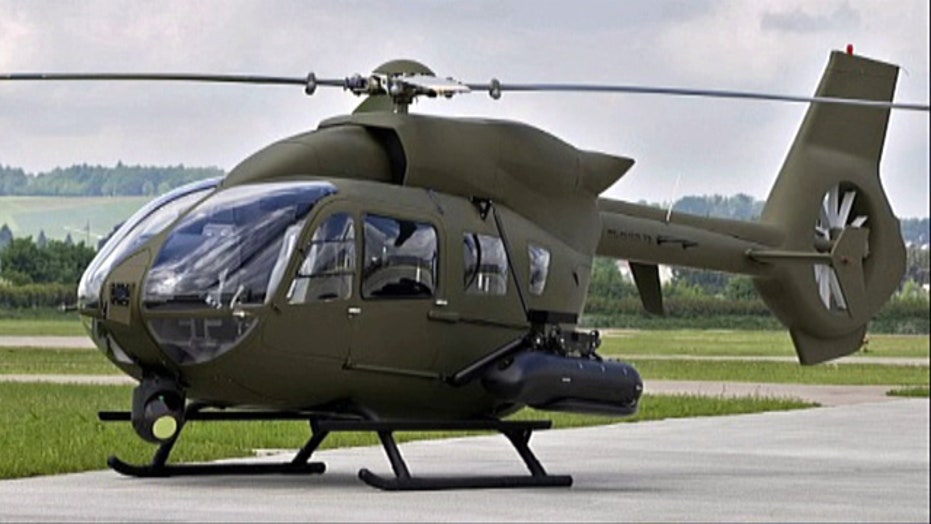 Military officials from the U.S. and around the world are back home with their wish lists compiled from their epic hunts last week through more than 1,500 companies’ military tech offerings at Eurosatory in Paris.

In a climate of defense spending cutbacks, many countries are still committed to equipping their special operators with the best. Here are three in the top tech category recently revealed for special operations forces:

Special Operations Helicopter
A new powerful helicopter for special-ops recently made its debut in Europe.

The rugged medium-sized EC645 T2 made by Airbus Helicopters (previously called Eurocopter) is made to deploy for a range of missions from armed scout and light attack to search and rescue and MEDEVAC.

Powered by two Turbomeca Arriel 2E engines with dual-channel, full authority digital engine control (FADEC) -- it is the most powerful in this series.

Power is important because it can provide maximum speed and agility while carrying a full payload. The EC645 T2 has a maximum takeoff weight of more than 8,000 pounds, speed of more than 150 mph and range of about 412 miles.

Reports are it performs really well in what is called “6K/95 high & hot” conditions, meaning operating in 6,000 feet altitude and 95-degree environments.

This latest model features door mounted or podded machine guns giving operators the maximum space in the cabin for themselves and their gear. The cabin has easy access through the side and rear doors for rapid ingress and egress by 10 operators.

The EC645 T2 can also be fitted with a wide range of armament, from ballistic to guided ammunition.

Pilots will find it has a modern digital one with the Helionix avionics suite, full night-vision capabilities and four-axis autopilot.

The U.S. Army is operating more than 250 of the UH-72A Lakota version of this helicopter.

An immediate hit with special forces around the world, it has already been ordered by Germany for Special Forces Command (Kommando Spezialkräfte), who will receive their first helicopters next year.

IWIs other options are semi-automatic, so the Dan .338 is their first bolt-action. The company says it focused on combining a high level of accuracy with a robust strong system.

The bolt-action sniper rifle market for military and law enforcement is already hotly contested with a proliferation of companies fighting it out.

DAN .338 may have a design edge since they have been working closely with Israel Defense Forces (IDF) special forces' units to refine and continually improve it since 2010.

This rifle has an aluminum-alloy modular chassis with full-length MIL-STD 1913 Picatinny rails along the receiver’s top and bottom. Rails can also be fitted along the side of the chassis.

Without magazine, telescopic sights, or mount, it weighs about 15.2 pounds. At about 50 inches long, it shortens to just over 40 with the lightweight stock folded.

Its 31-inch, heavy-fluted, free-floating barrel with a 1:10" twist provides sub-minute of arc (MOA) accuracy, according to the company.  Without having to use specialist tools, the barrel itself can be quickly changed. It has a built-in muzzle break and can be optionally threaded for suppressors.

DAN .338 has 10 round drop-free box magazine and both ambidextrous magazine release and safety.

Revealed at SOFIC in the USA and Eurosatory in Europe, the Mohoc provides a smart alternative to sports-based cameras like GoPro and Contour, often also used by militaries.

Their design aims to reduce the camera being cumbersome and introduce a better fit specifically for combat environments.

The Mohoc has a low profile and is "snag-free," meaning it aims to prevent the camera snag factor when warfighters are trying to move through environments or even dismount vehicles and helicopters only to find their camera has snagged them.

Its Velcro mount and curvelock system allow it to be securely attached to an operators’ helmet. Mohoc is also easy to use with a single finger one-touch operation.

Waterproof to approximately 10 feet for 30 minutes and shockproof capable of surviving a 10-foot drop test, it is also dust-proof and does not require any additional external housing.