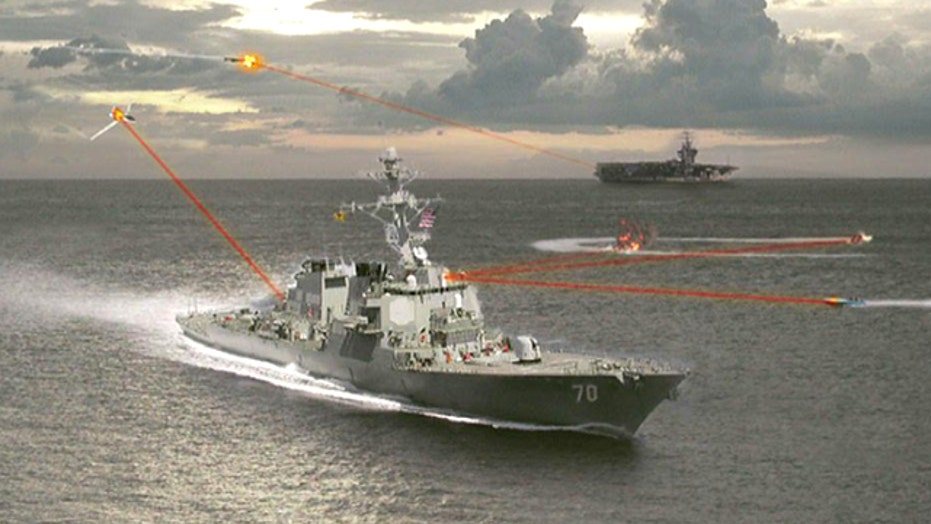 Who wouldn’t want a ray gun?

The military aims to turn lasers weapons from science fiction into reality for everything from space platforms to Humvees.

Weaponized lasers will bring nearly instant, extremely precise strikes to the battlefield. And with “deep magazines” of laser-ness, they remove the worry of running out of ammunition. Plus lasers can be calibrated to the scale of the threat, ranging from a non-lethal blow through to taking out a missile.

That’s why several big defense companies are taking a fresh look at lasers.

Thin Disk Laser
This week, Boeing announced that its “Thin Disk Laser” system surpassed the DoD’s requirements for the RELI system. It takes a series of commercial solid-state lasers and integrates them to produce one concentrated high-energy beam.

Leveraging commercially available lasers provides a number of benefits like keeping costs down and ensuring they need minimal support and maintenance.

Boeing said blasts from its Thin Disk Laser surpassed 30 kilowatts in power, more than 30 percent over DOD standards and enough to do some serious damage to a battlefield threat.

“Our team has shown that we have the necessary power, the beam quality, and the efficiency to deliver such a system to the battlefield,” said Michael Rinn, vice president and program director of Directed Energy Systems for Boeing.

The demonstrations were the first time the system simultaneously achieved high power and high beam quality, which helps improve the laser’s focus at longer ranges.

How does it work?
There are lots of different types of military lasers. The RELI program focuses on solid state ones – so called because they have a lasing medium that is solid crystal.

Lasing is the process that gets light particles excited enough to emit a particular wavelength. On their most basic level, lasers work by getting photons stimulated, concentrating them using something -- in this case a solid like a prism -- and then directing them into a beam.

The biggest leaps in solid-state laser technology have been made through the U.S. military's Joint High Power Solid-State Laser (JHPSSL) program, which has ignited some major headway in this sort of tech.

But Boeing has also been making progress in other sorts of military laser weapons. Notably, the company was awarded a U.S. Navy contract to develop the Free Electron Laser weapon system to build an ultra-precise laser gun to defend U.S. ships.

Also under development for the US Navy, the Mk 38 Mod 2 Machine Gun System with Tactical Laser System soups up a gun already deployed worldwide with a solid-state, high energy laser weapon.

Back in the RELI ring, Northrop Grumman has made some key forays forward in high-energy solid-state lasers.

In 2001, the company became the first to successfully operate a laser weapon at sea for the U.S. Navy.

With its JHPSSL system, Northrop became the first to achieve the 100-kilowatt power level threshold for a solid-state laser in 2009.

And then there’s this: The Army Space and Missile Defense Command recently gave Lockheed Martin a $14 million contract to develop a system for the RELI program.

The company’s Aculight uses “Spectral Beam Combining” to produce a high power laser beam. It works sort of like an inverse prism, with lasers of slightly different wavelengths entering it and coming out as a single beam.

The result is a compact fiber laser system capable of producing 100 kilowatts of power.

Fiber lasers tend to need less power to operate and optical fibers provide nearly perfect quality beams. Rather than using mirrors that can become misaligned, this approach confines the light within the fiber’s glass structure.