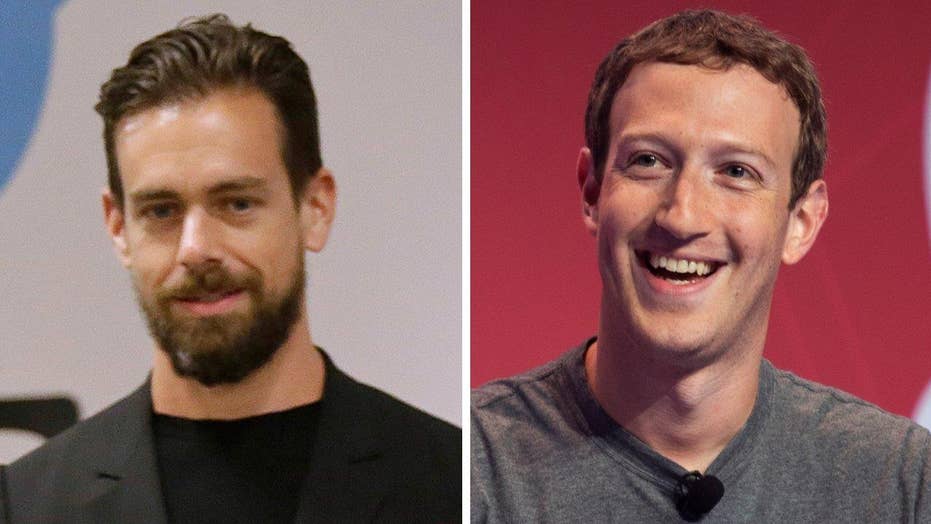 ISIS has issued a threat to Facebook founder Mark Zuckerberg and Twitter founder Jack Dorsey over the companies’ effort to take down terror-affiliated accounts, according to a published report.

Vocativ reported Wednesday it had uncovered a 25-minute video allegedly created by ISIS on the instant messaging app Telegram. The video shows a photo of Zuckerberg and Dorsey with bullet holes across their faces.

“You announce daily that you suspend many of our accounts, and to you we say: Is that all you can do? You are not in our league,” a message in white text reportedly reads. “If you close one account we will take 10 in return and soon your names will be erased after we delete your sites, Allah willing, and will know that we say is true.”

The closures of ISIS-affiliated Twitter and Facebook accounts have led the terror group to use Telegram, according to Vocativ. Days after the Paris attacks, which left 130 people dead, the company announced it closed 78 ISIS-related channels. Reuters reports that the app counts 60 million active users around the world.

Facebook has purged numerous ISIS-related pages in the past, including pages selling treasure plundered from Syria and Iraq and pages selling ISIS gear after a 2014 Fox News inquiry.

Earlier this month, Twitter announced it had suspended more than 125,000 accounts for threatening or promoting terrorist acts since mid-2015.

In a blog post, Twitter explained that it had also increased the size of the teams that review reports, significantly reducing response time.

“We also look into other accounts similar to those reported and leverage proprietary spam-fighting tools to surface other potentially violating accounts for review by our agents,” it said. “We have already seen results, including an increase in account suspensions and this type of activity shifting off of Twitter.”

A study released by the Brookings Institution in March 2015 warned that ISIS supporters may be operating more than 46,000 Twitter accounts. The study found that almost one in five ISIS supporters selected English as their primary language when using Twitter. Three quarters selected Arabic.