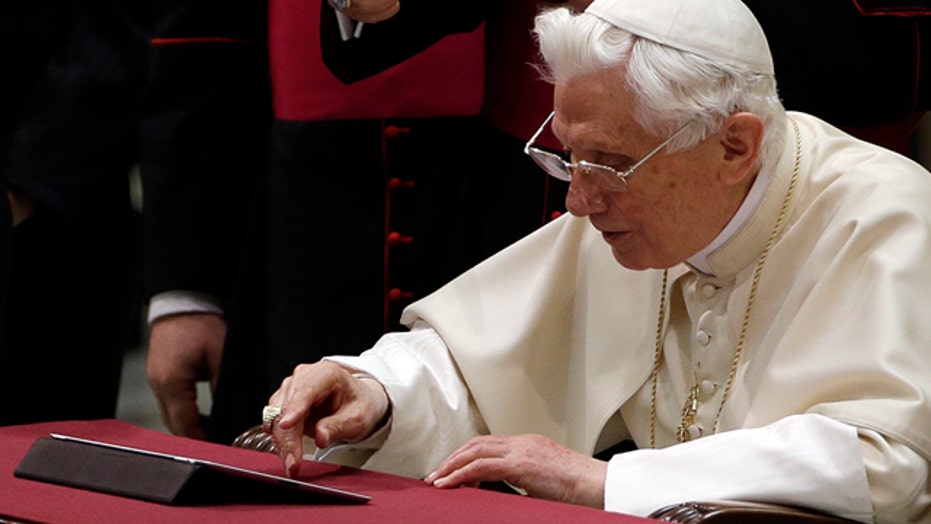 Do social media play a role in picking the next Pope?

If you had to guess who has the biggest footprint on Facebook would you guess one of the Justins -- Timberlake or Bieber? Perhaps Kim Kardashian or President Barack Obama?

Celebrities may have more followers, but with 1.3 billion impressions every 30 days and over 16.5 million fans, Jesus Daily claims to be the most engaged Facebook page in the world. The site’s success is indicative of the way religion has moved beyond the churches and synagogues onto the web, where faith can touch us not just on the weekend but every day.

Even Emeritus Pope Benedict XVI took to Twitter at age 85, quickly building up more than 1.6 million followers before signing off the social network on Feb. 28 following his almost unprecedented resignation, sending a final thankful tweet:

@Pontifex: “May you always experience the joy that comes from putting Christ at the centre of your lives.”

As the cardinals gather in the Vatican to elect the next Bishop of Rome on March 12, the fate of that Twitter account is unclear; the tweets on the @Pontifex account have been deleted and the name that appears alongside the handle reads “Sede Vacante,” Latin for “empty chair.” The Vatican has said it will leave the account untouched until Benedict’s successor is picked and decides if he, too, wants to use Twitter.

'May you always experience the joy that comes from putting Christ at the centre of your lives.'

“There are ways of being tech savvy, and some [religious leaders] are developing sustained, interpersonal relationships and making a difference in people’s lives through the context of digital ministry,” Elizabeth Drescher, author of “Click 2 Save: The Digital Ministry Bible” and religion and pastoral ministries professor at Santa Clara University, told FoxNews.com.

And expect religion to get even tech savvier, Drescher said: Our expectation that everything be instantaneous, accessible and on-demand means these figures and organizations need to become more mobile.

Another religious leader with a large following on Twitter is the Dalai Lama who on his @DalaiLama verified account has more than 6 million followers. The Dalai Lama mainly tweets instructive inspirations, such as his most recent message on March 7:

These messages are what Fr. Jonathan Morris, a Catholic priest and Fox News contributor, likens to a delicious appetizer.

“If you’re hungry, and I believe everyone is hungry for God, and you taste a really good appetizer, then you’re going to want to taste the next course because [social media] doesn’t replace the Bible, sacraments, or church,” Morris told FoxNews.com.

Just as St. Paul was willing to travel in order to spread the message of the gospel, Morris -- who uses Twitter and Facebook, and hosts a SirusXM Catholic radio channel -- sees social media not just as an opportunity, but an obligation to reach out to people who may not be coming into his pews on Sundays, as well as a means to keep in touch with parishioners.

Lakewood Church spokeswoman Andrea Davis explains to FoxNews.com that such forums offer the opportunity to connect with people in real-time: “Waiting until tomorrow to interact with people about a service or an event that is happening today is too late.”

In a single month Joel Osteen, who now has about 1.4 million Twitter followers and whom Nielsen Media Research says is the most watched inspirational figure in America, will tweet approximately 224 times resulting in potentially over 413 million impressions. “As Christians, social media gives us the opportunity to cast a wider net, to let our lights shine more than ever before,” Davis said.

The Internet then becomes a place of prayer and worship.

Chabad Rabbi Uriel Vigler of the Chabad Israel Center in New York’s Upper East Side said social media has also been invaluable for education. He uploads weekly “two-minute Torah” video lessons, but people of other religions can also find apps for Buddhist meditation, Ignation contemplation and even a compass to point them in the direction of Mecca at times of prayer.

In Benedict’s message for the 2013 world day of social communications, the pope recognizes that social media is penetrating people’s lives and providing new spaces for evangelization.

“The Church sees that and embraces it as a means to dialogue and to the free and easy exchange of ideas,” Mary Nolan, a spokeswoman for Vatican news outlet L’Osservatore Romano, told FoxNews.com.

Nolan said the fact people can find a Torah lecture or a papal encyclical online shows how social media can help nourish faith.

“The idea is to be present when [people wonder about God] and help them from there," she said.