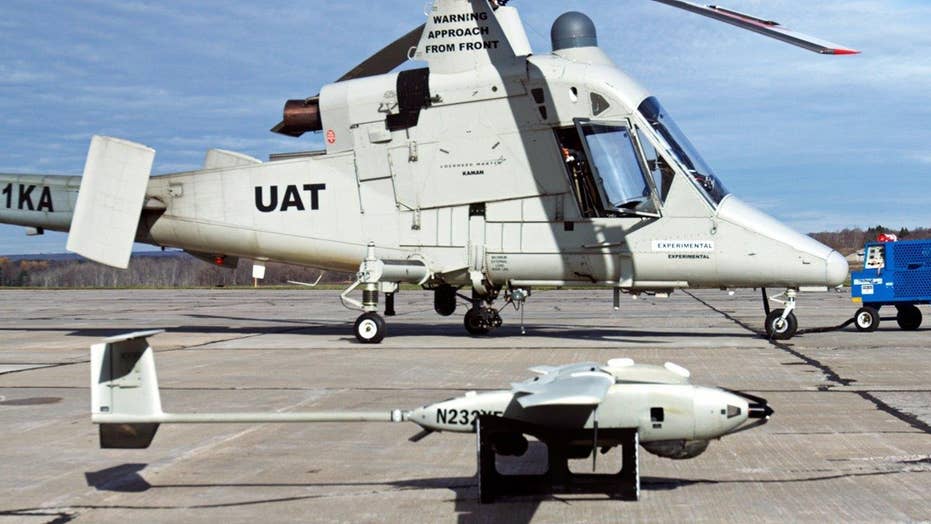 How firefighters could harness the power of military drones

What happens when a terrorist hunting drone and a resupply helicopter drone join forces?

Aircraft with human pilots have been supporting American firefighters for several decades. This is a new generation of machines helping to fight fires.

The Stalker Extended Endurance (XE) and K-MAX drones could reinforce firefighters and potentially reduce the risk to the lives of first responders.

Both Stalker and K-MAX are designed to be cutting-edge military tech, but they also have great potential for civilians to help reduce the loss of life and life-changing injuries suffered every year.

How do the drone duo fight fires?

Basically, Stalker XE is the boss and K-MAX does the heavy lifting. Stalker XE is a small surveillance drone and K-MAX is a large resupply helicopter one. Together, they can fight fires all by themselves. Stalker finds the fire and directs K-MAX to drop water at exactly the right location to put it out.

They’re both unmanned systems, or drones. Stalker uses its state-of-the-art military tech to flag and precisely locate a fire. The drone then communicates with the much bigger K-MAX, which is loaded up with water.

In a recent demonstration, Stalker XE successfully directed K-MAX to drop water exactly at the necessary spots to put out the fire.

Heat can be a serious challenge in fighting fires. In spite of the immense heat fire can generate, K-MAX was designed to maintain performance in extremes and can still perform.

Conditions like smoke can also limit traditional missions due to visibility for human pilots, but K-MAX can carry on picking up water and delivering it by itself in low visibility conditions.

Stalker XE is an intelligence, surveillance and recon drone made by Lockheed Martin’s Skunk Works, famous for innovative aircraft design.

Popular with special operations, Stalker XE is a small drone with a 12-foot wingspan. When flown at about 400 feet, it is silent to people on the ground.

Related: 'Bird' gadget lets you control a drone with your finger

Launched by just one operator and a bungee, it can stay aloft for more than eight hours, reach speeds of 45 mph and heights of up to 15,000 feet with its ruggedized solid oxide fuel cell.

It is designed to provide high-definition images in a range of the extreme environments. In both daylight and at night, the drone can provide images and data.

In addition to its high-def capabilities, Stalker XE’s image-tracking tech has the ability to pan, tilt and zoom using its electro-optical infrared camera, which can precisely locate and analyze fire intensity for K-MAX. The imagers and laser can also provide precise geo-referenced imagery products for human firefighting teams to review.

Manufactured by Kaman and equipped with Lockheed Martin’s advanced mission systems and sensors, K-MAX is used by the military to get massive amounts of supplies to forces quickly. It can lift and deliver a whopping 6,000 pounds of cargo at sea level as well as travel at speeds of about 115 mph.

During a three-year period between 2011 and 2014, when it deployed with the U.S. Marine Corps, for example, K-MAX delivered more than 4.5 million pounds of cargo for the Corps while flying more than 1,900 missions.

Its design includes a four-hook carousel that helps to maximize the cargo it can deliver to different locations in just one flight.

With the drone’s advanced autonomy tech, K-MAX can deploy day and night on repeat missions – without the limiting factor of human fatigue and crew availability.

The helicopters twin-rotor design helps to maximize lift in extreme environments. Very robust, it has also been designed to fly in all sorts of challenging weather conditions.

Will they get the chance to fight fires in the U.S.?

Recently, both drones worked together to fight a fire successfully integrated into the National Airspace System. Using a prototype of unmanned Traffic Management tech, the robot team effectively communicated with Air Traffic Control in real time.

This is a key step forward to joining the fight against fires. Because for these drones to deploy in civilian space, they need to prove they can cooperate with, and within, the civilian airspace framework.