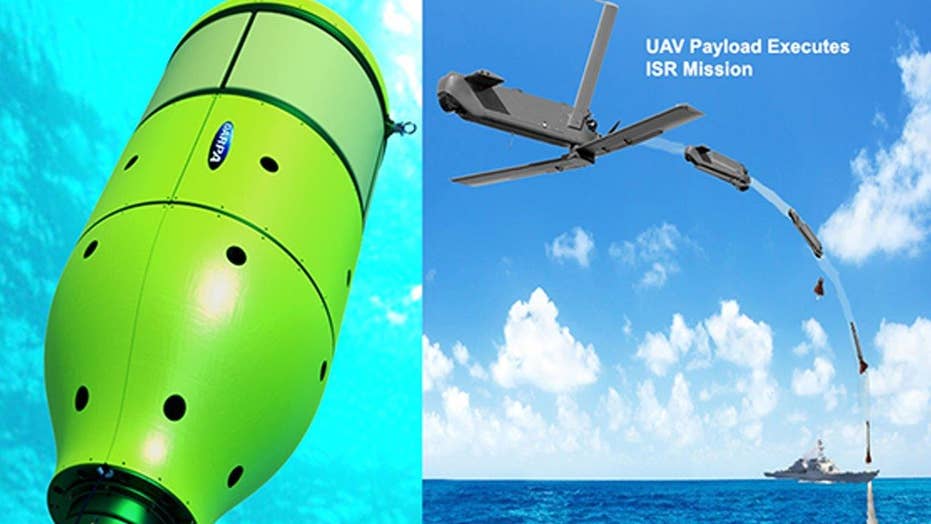 What if the U.S. could seed secret pods deep in the oceans that suddenly burst out of the water unleashing devastating surprise attacks on the enemy? While this sounds like the stuff of science fiction the Defense Advanced Research Projects Agency (DARPA) is working to make this amazing project science fact.

Known as Upward Falling Payloads (UFPs), the pods are made by DARPA, which aims to develop innovative technologies to keep the U.S. safe.

The military would pre-position these huge pods throughout the oceans. The pods would enter hibernation and could be activated after weeks, months, or years.

When needed, the military would command the UFP to “wake up.” The pod would then set off on its rapid journey from ocean deep to surface using its buoyancy collar.

Once at the surface, the pod’s contents are released. Inside the pod could be a small UAV that would burst forth to provide eyes in the sky. Alternatively, the capsule could contain a futuristic weapon system that provides a decisive element in a surprise attack. DARPA is working on a number of decisive payloads that could fit within the UFP.

What are the challenges?

There are four key elements to developing UFPs: survival in the depths for long periods of time, communicating with the pod, how the pods travel from the ocean depths to the surface and the payloads themselves – what is hidden inside the pod.

Whether on the ocean floor or in the darkest depths, the UFPs must survive under very extreme ocean pressure for very long periods of time – no small feat.

In terms of activation, communicating with something so deep under water after possibly many years of sleep is also a difficult challenge. The pod will also need to send back health status information and the military will need to be able to communicate with it from a great distance.

How does the 5,000-pound pod then rise to the surface? The UFP ‘riser’ is designed to provide pressure-tolerant encapsulation while rapidly rising to the surface, thanks to its collar. The collar is made out of a material that is positively buoyant so it lifts the UFP to the surface.

Once at the surface, the riser must launch its ‘payload,’ which could be an airborne or waterborne drone … or lots of other mind-blowing options. Some options under consideration maximize the element of surprise. The payloads could deploy for a wide range of missions including deception, decoy, disruption, situational awareness and even rescue.

How will they be used?

Almost half of the world’s oceans are more than 2.5 miles deep and this gives the U.S. military lots of opportunities for concealment and storage of the devices. The UFPs can lie dormant and undetected for very long periods of time.

Related: This huge combat tractor is the ultimate multitasker

Oceans cover about 71 percent of the world’s surface. The Navy needs to operate over the vastness of these oceans, yet ever-shrinking budgets continue to limit the Navy’s ability to develop and acquire weapons systems and platforms.

Unmanned systems are one way to help fill these coverage gaps and give the military the ability to strike far-flung targets, overcoming the distance limitations of UAVs on Navy vessels.  Instead, a UFP nearby would simply need to be activated.

DARPA has been building and sea testing both the system’s riser and communications components. In Phase 3, DARPA is running sea demonstrations of the UFPs communicating and rising to the surface, as well as deploying different payloads.