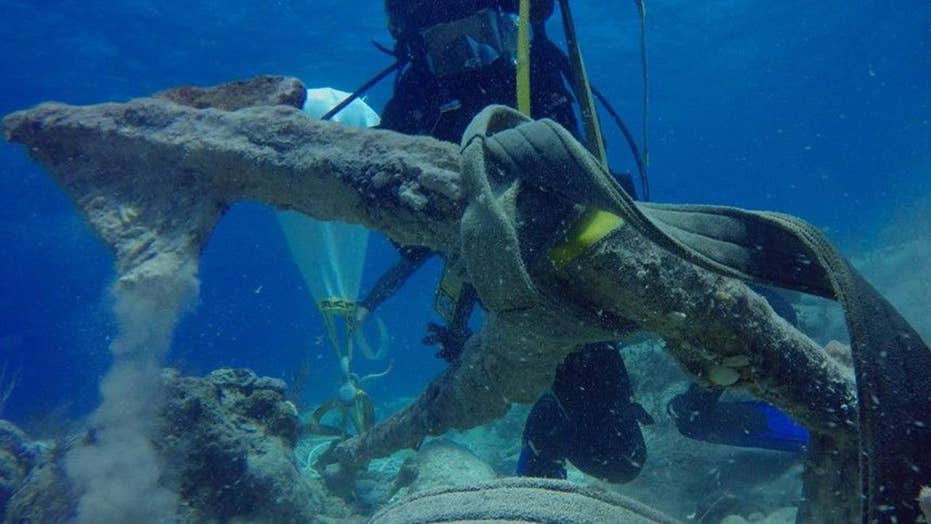 A centuries old anchor, believed to have been from Christopher Columbus’ ships, was discovered

EXCLUSIVE: Experts have used a “space treasure map” to make a remarkable discovery in the Caribbean -- a centuries-old anchor believed to be from one of Christopher Columbus’ ships.

Analysis of the anchor, which was found off the Turks and Caicos islands, reveals that it dates to between 1492 and 1550. The overall size of the anchor and its estimated weight of between 1,200 and 1,500 pounds indicates that it was a “bower” anchor from a 300-ton vessel, the typical size of a Columbus-era ship.

The discovery will be revealed in the next episode of the Discovery Channel docuseries "Cooper's Treasure," which airs at 10 p.m. ET Tuesday. “That anchor is from Christopher Columbus,” says historical shipwreck discovery specialist Darrell Miklos, who led the Caribbean expedition, in a clip from Tuesday’s show. “I am telling you, stick around, this is just the beginning of an amazing story.”

Miklos used a space treasure map created by his late friend, NASA Astronaut Gordon Cooper, to find a series of Caribbean shipwreck sites. Cooper, who died from Parkinson’s disease in 2004, created the map following his Mercury 9 Faith 7 flight. At the time, he was possibly on a mission to identify Cold War nuclear threats.

Armed with Cooper’s detailed map and archival research, Miklos and a crew of experts identified five “colonial period” wreck sites. The team used a magnetometer to identify shipwreck areas and then dived down for a closer inspection using a metal detector.

The Turks and Caicos discovery is believed to be linked to Vicente Yanez Pinzon -- a Spanish sailor, who, along with his brother Martin Alonso Pinzon, was part of the Columbus expeditions.

Martin and Vicente were captains, respectively, of the Pinta and Nina on Columbus’ first voyage in 1492. Six years later, around the time of Columbus’ third voyage, Vicente Pinzon set off from Spain with four Caravels, or small sailing ships, including the Pinta, in what is known as one of the expedition’s “Minor Voyages.”

In 1499 and 1500 Vicente Pinzon discovered Brazil and the Amazon River. In the spring of 1500 the captain met with Columbus in Haiti to discuss the Brazilian discovery before leading his four ships back to Spain. However, in July of that year Vicente Pinzon’s fleet was caught in a hurricane while anchored near the Turks and Caicos islands and two of his ships were wrecked. In 1502 Vicente Pinzon returned to the area in an attempt to salvage cargo from the two vessels.

In addition to the anchor, Miklos’ team found a trove of other artifacts at the shipwreck site, including three grappling hooks that date back to the Columbus era. The grappling hooks, or anchors, were used for salvaging treasure from sunken ships.

Archaeologists also found broken pieces of pottery and an olive jar painted with indigo paint, which indicates Spanish origin. A pot from the Spanish island of Majorca was also found, which also dates the wreck to the period between 1492 and the early 1500s.

Additionally, several iron and bronze spikes, possibly the last remnants of the sunken ships, were found, as well as a broken section of anchor's ring was found. The broken anchor ring could indicate that the anchor came from a third ship in Pinzon’s fleet that was torn from its anchor during the hurricane.

The discoveries mark a major breakthrough for the expedition. “It means that we now have one of the most valuable maps in history,” explained a spokeswoman for the show, in an email sent to Fox News. “The way that ships wreck is that they leave a trail so the anchor is pointing to more artifacts/treasure to be found.”