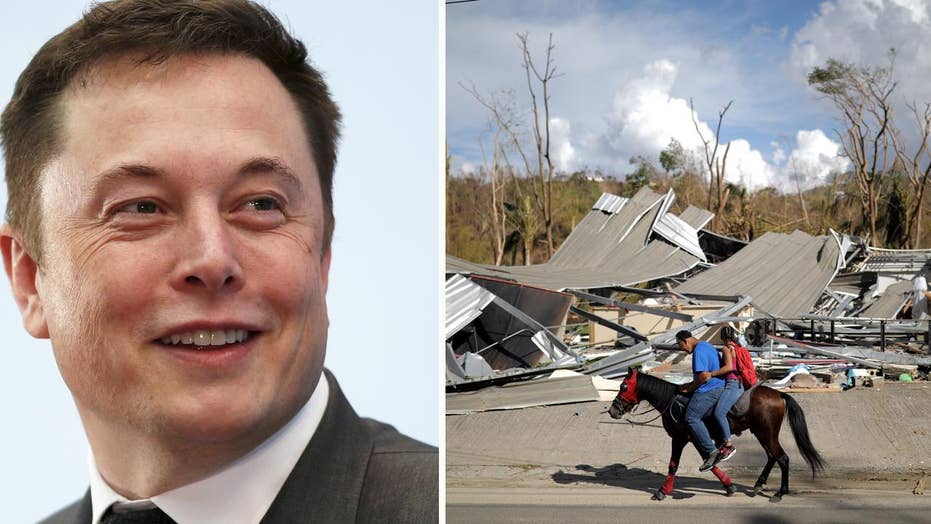 What Tesla CEO Elon Musk is saying about rebuilding Puerto Rico's destroyed power grid and how the territory's governor is responding.

Robert Downey Jr.'s version of Tony Stark in "Iron Man 2" may have been loosely based on Elon Musk, but it appears Musk is the real super-hero, as he tries to save one energy grid at a time.

Responding to a comment from a follower, Musk said that he could rebuild Puerto Rico's electrical infrastructure destroyed by Hurricane Maria.

"The Tesla team has done this for many smaller islands around the world, but there is no scalability limit, so it can be done for Puerto Rico too," Musk tweeted.

Upon seeing this, Puerto Rico's governor Ricardo Rossello‏ tweeted back at Musk, writing "Let's talk." Musk responded, saying he would be happy to talk and is hopeful Tesla can help.

According to several media reports, 95 percent of the U.S. territory is still without power after the category 4 hurricane battered the island weeks ago. Some estimates have said that a full restoration of power may not return to Puerto Rico for as long as six months.

Tesla has not responded to a request for comment from Fox News.

In addition to selling electric cars, including the recently introduced Model 3, Tesla has an energy storage business, selling battery packs to commercial utilities, as well as home residences. It also has a solar panel business, after it acquired Solar City, co-founded by Musk's cousin Lyndon Rive, for $2.6 billion in November 2016.

Tesla has powered such smaller islands as Kauai in Hawaii and Ta'u in American Samoa, according to the company's website. The populations of those islands is far less than the 3.4 million people living in Puerto Rico.

James Murdoch, the CEO of 21st Century Fox, parent of Fox News, is a member of Tesla's board of directors.

Tesla has already sent a number of its battery packs to Puerto Rico to help the island store energy in an effort to offset the shortage. Musk has also personally donated $250,000 in an effort to rebuild the island.

The conversation between Rossello and Musk is similar to one that took place several months ago, between Musk and billionaire entrepreneur Mike Cannon-Brookes, who asked if Musk was serious about ending South Australia's rolling blackouts.

Musk responded by saying the company could do it in 100 days from the time the contract was signed or it would be free.

It has since won a contract to help fix the issues in South Australia.