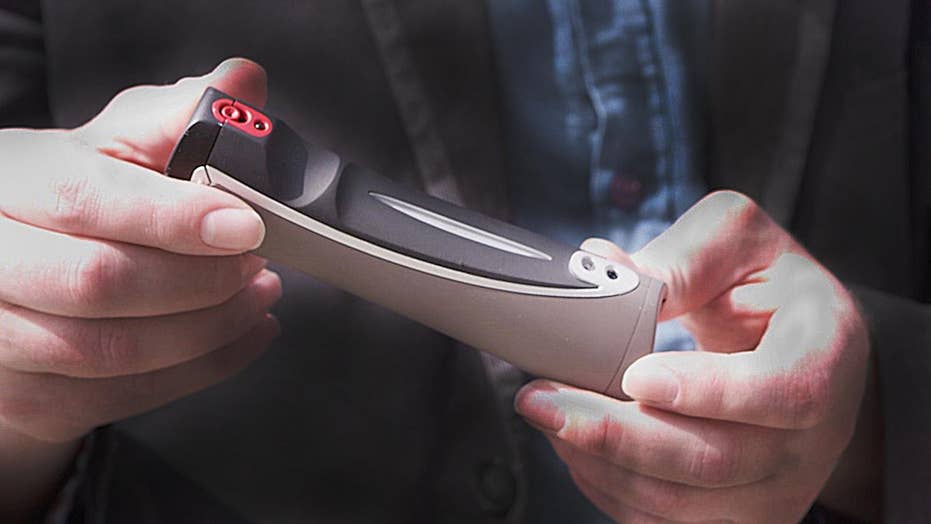 Smart & Safe Tech: Defender 24/7 is the first hand-held smart technology pepper spray that connects to your smartphone. The device also uses a camera that instantaneously takes a pictures of the perpetrator and provides 24/7 monitoring

A little security is a good thing when you're out and about in this dangerous world, but a traditional pepper spray gadget can feel old-fashioned and ineffective these days.

It's the Defender 24/7, an all-in-one camera, oscillating flash, siren and pepper spray that connects to a 24/7 alert service through a smartphone app, activates with the push of a button and is small enough to hang from a keychain.

"There's a violent crime in the United States about every 25 seconds," McManus said, a statistic confirmed by the 2010 FBI's Uniform Crime Reporting Program.

"And with one in five women experiencing sexual violence while in college, personal safety is a major concern," he added.

"When someone is walking alone after dark by themselves, they're vulnerable and they need something that's proactive to help them not only to protect themselves but to alert anyone that might be able to help them," McManus said.

McManus got the idea for the Defender when a loved one went to college and he wondered if there was something she could carry that was better than a Taser or pepper spray.

"Nothing like this had ever been created," he said. "What we decided to do was combine personal protection, security response, and immediate alert into a single device that would work with your smartphone, something that everybody was [already] carrying."

To activate the device's pepper spray, camera, flash, siren and alert system, you simply press a button. Using Bluetooth, the Defender connects to your GPS-enabled smartphone and transmits your location to a monitoring center, which contacts law enforcement and "provides all of the critical information they need to be able to respond quickly and to the exact spot where you are," McManus said.

The alarm can alert bystanders to a person in trouble, and the camera helps victims provide details of their attacker(s).

He said the device could even enhance the 911 system: "With a device like Defender 24/7, whether it's for safety or for medical, we'll know exactly where somebody is to be able to provide fast and accurate response."

The Defender app also includes notification of family and friends if a medical or safety alert goes off. "Your loved one, your spouse, your friend, they can get a notice to know immediately when an incident happens," McManus said.

Defender users can test the device and become familiar with it by using a water vapor cartridge instead of one that contains pepper spray. And the device is re-usable, not disposable. It can be charged at home, just like a smartphone, and Defender will replace a used pepper spray canister with a refilled one.