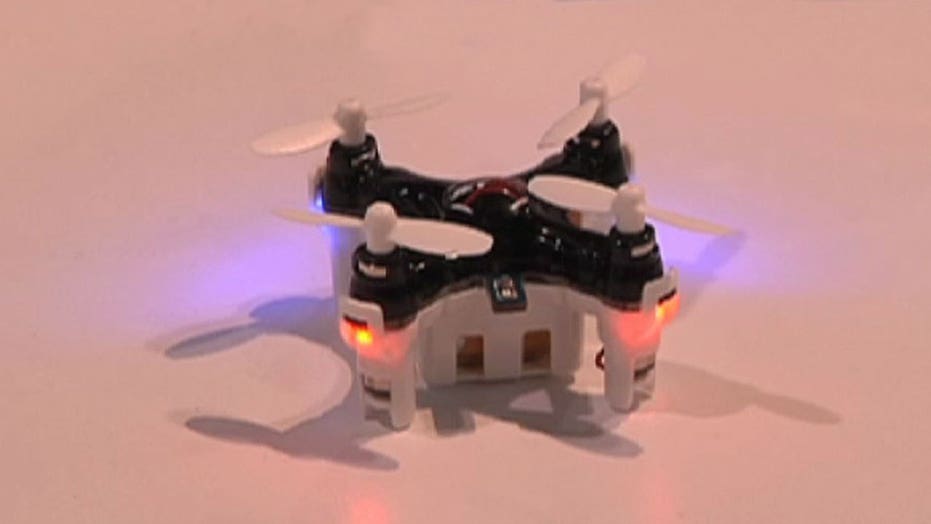 A record number of drones showcase new technologies, sizes and materials at the CES

Drones are more popular than ever at the 2016 Consumer Electronics Show. This year’s show saw a record number of exhibitors at the Unmanned Systems Marketplace, and it looks like the sentiment is shared nationwide.

According to FAA Administrator Michael Huerta, more than 181,000 drones have been registered with the federal government since a database began on Dec. 21st.  "We’re encouraged by the registration numbers we’re seeing so far," he said, during a speech at CES.

Eager exhibitors at CES were also encouraged by the news. Drones displayed at the show are higher tech than ever before.

Here are three drones we checked out at CES that will make you rethink how you take to the skies:

Mota unveiled seven different lines of drones at CES this year. But the one that caught our eye was the tiny JetJat Nano- which the company is pegging as the world’s smallest and lightest drone. Passersby were clamoring to get a photo of the microscopic drone in their palms. The tiny device - no bigger than a large paperclip - is a fully-functioning quadcopter. It comes equipped with a 2.4 GHz wireless signal and 4-channel controller. Jon Bunting of Mota warns not to go too crazy with the undersized unmanned system. Keep it relatively low and out of bad weather’s harmful effects. But Mota’s CEO Michael Faro ensured us small is the new big when it comes to commercial drones.

“You can do a lot with this drone- even though it looks pretty small. It can be very exciting,” he said. “It can do flips, there are so many maneuvers it can do. Its flight is completely stable. The blinking lights help guide it so that you don’t lose track of it. And it’s already calibrated so you just pop it out of its control based and it’s ready to fly.”

The JetJat Nano retails for about $40.

German optics company Zeiss is marrying drone technology and virtual reality in a new headset designed to give drone pilots first person views from the sky like never before. The company showcased the new VR ONE, which allows users to control the direction of their drone with just a turn of the head. Designed to connect with the Cloudflight FV app, the VR ONE can be used with both Apple and Android phones. Zeiss distribution partner Dave Hodgson says the concept of using your smart phone to connect to virtual reality can take aerial views to unprecedented levels for drone users.

“Because Zeiss is an optics company, you’re getting views like never before. It uses a premium optic design,” he said. “It provides a 100 degree field of view with a big beautiful display.”

The Powerup FPV is the world’s first paper airplane drone - complete with a live camera. This drone can fly through the air at speeds up to 20 mph, features real time streaming, Wi-Fi, and a height range of up to 300 feet. A paper airplane might sound like a flimsy base for such a high tech tool, but this one is made of durable carbon fiber. It also comes with crash detection software and a head mounted display for first person views. And if that wasn’t enough fun, PowerUp Toys has developed an app that allows users to utilize Google Cardboard for a first-person flying experience with the paper plane drone.

PowerUp Toys CEO Shai Goitein says this innovative new drone is an easy and fun way for anyone to operate an unmanned system.

“You have the opportunity to fly on a paper plane you actually make yourself… something most people learn how to do when they’re eight or younger … it’s very easy and intuitive to fly,” he said. “At the end of the day, it’s really to inspire you and to show you how enjoyable it is to fly and make paper airplanes.”

You can get a Powerup FPV for $179 through the company’s Kickstarter campaign.