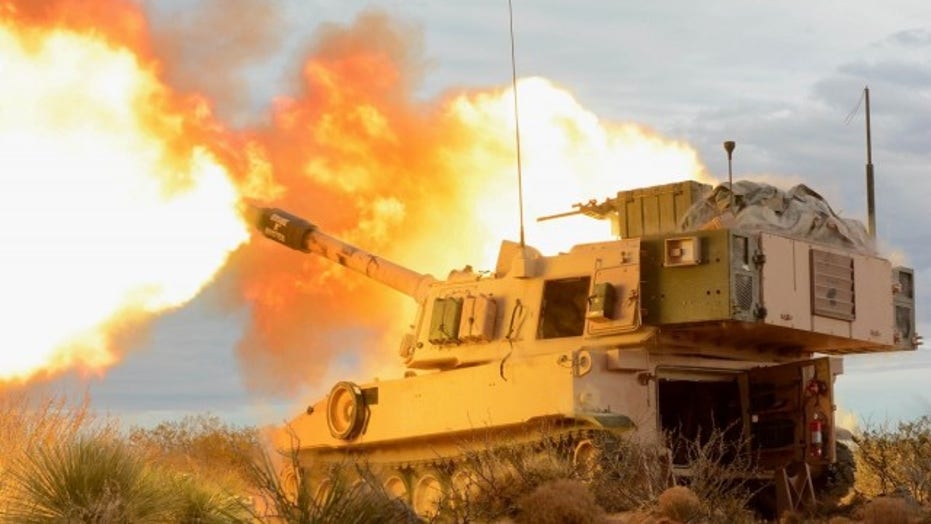 But how about 1,000 miles? Well, maybe, perhaps by 2023, should Army weapons developers stay on course with an ambitious long-range cannon science and technology program aimed at engineering a low-cost, high-rate-of-fire 1,000-mile ground cannon.

“We view this as something which can complement hypersonic systems, by delivering a volume of fire on an area against softer targets, while we use more exquisite hypersonic weapons against precision targets,” Brig. Gen. John Rafferty, long range precision fires cross-functional team director, Army Futures Command, told Warrior in an interview.

Rafferty said the effort, now being pursued by Army Futures Command and the service’s Rapid Capabilities Office, is engineering an “integrated cannon system that will shoot a novel projectile.”

“Now we are working on the projectile design,” Rafferty said.

Rafferty addressed some of the technical complexities that accompany the effort to engineer a 1,000-mile range cannon, citing the need to balance muzzle velocity, chamber pressure and projectile acceleration. The engineering must be precise and stable enough to enable projectiles to “survive the launch environment,” Rafferty said.

Interestingly, the long-range cannon effort is, tactically speaking, a weapon being thought of as something that can blanket targets with multiple rounds at one time. Using a high-rate of fire, fast-traveling projectiles and unprecedented ranges, a weapon of this kind could bring massive damage to enemy troop concentrations, command and control centers or armored vehicles.

While there is no reason the weapon could not incorporate high measures of precision targeting, it is being designed to support highly-precise individual projectiles such as a hypersonic weapon. This means it could both be extremely accurate while also functioning, to a certain degree, as an “area weapon” to blanket certain locations with fire to enable forces to maneuver. This kind of function, interestingly, aligns with the classic use of artillery in war, prior to the advent of precision guidance.

Should a hypersonic weapon descend upon a specific target area to pinpoint, for instance, the epicenter of an enemy command and control center, a low-cost, high-rate of fire cannon could deliver supportive fires in the surrounding area against established, well-identified high-value targets. The concept, as Rafferty put it, is to create a “real dilemma for the enemy.”

“With proper funding, we can demonstrate 1,000-mile shots in 2023. We are relying on our industry partners and we have accomplished all of the milestones on our schedule,” Rafferty added.

A weapon such as this can complicate an enemy’s freedom of maneuver, offering a distinct advantage to attacking ground forces. It brings new tactics, as there may be targets not reachable by sea-fired cruise missiles or simply too wide-spanning for precision air-dropped bombs.

Perhaps air assets are not available or in range for attack. Perhaps forward operating, clandestine recon units suddenly come under attack and need to call for long-range ground fire. Most of all, perhaps, a weapon such as this would enable advancing mechanized forces to hit targets at much safer standoff ranges and soften up targets for closer-proximity ground attack.

“Under our Army modernization enterprise, there are a lot of simultaneous activities. It can’t be linear. We can’t sit back. We have to move out and begin to get a cycle of concepts informing research with research informing concepts,” Rafferty said.