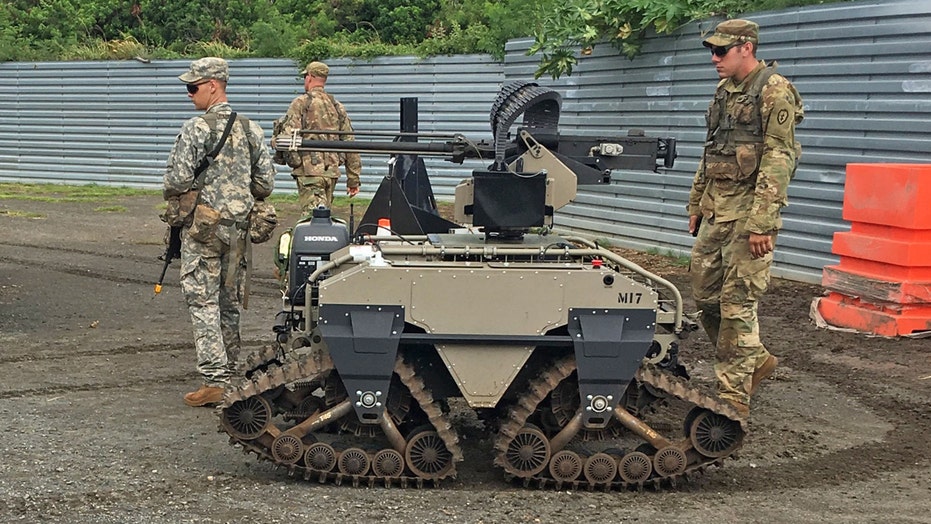 Self-driving cars are grabbing headlines lately, and the military is also making inroads with similar tech— but these vehicles are mounted with weapons like machine guns.

General Dynamics created MUTT, aka Multi-Utility Tactical Transport, to help dismounted small units. This is a smart robot designed to help lighten the load for Marines and other warfighters.

MUTT looks like a futuristic spin on the sort of quad you might have fun driving around your farm. Rectangular shaped, it is 5 feet long and 4.5 feet wide and weighs 750 pounds.

The vehicle drives on tracks or wheels, and there are two wheeled variants: 8x8 and 6x6. War zones are unlikely to provide convenient flat, easy surfaces, so MUTT is designed for high performance mobility in tough terrain like mud, sand and steep inclines.

And MUTTs can also be amphibious. They tackle water with gusto.

What sort of weapons can it carry? The robot can be mounted with a range of different machine guns on top. One option is a Browning M2 .50 caliber machine gun that weighs about 84 pounds. In this scenario, forces can harness the power of this weapon without having to lug around the weight themselves.

Other options could include the belt-fed fully automatic FN Hershel 240B medium machine gun and the classic SAW (Squad Automatic Weapon M249). Beyond machine guns, they’ve also been successfully kitted out with options like 60mm mortars.

Rather than warfighters having to deal with the weight, MUTT can carry heavy weapons that provide even more serious firepower.

What else can MUTT do? It can carry about 600 pounds, so that U.S. warfighters don’t have to carry that weight themselves. It’s handy for forces on the move, as carrying less weight means warfighters can move faster while reducing fatigue and improving force protection.

There’s a platform on top to load gear, which could be 600 pounds worth of ammunition, supplies, gear, communications equipment, weapons, counter-IED tech, micro UAVs, batteries and more.

In the event of a firefight, MUTT can also help evacuate wounded warfighters.

Teams can harness MUTT as a travelling source of power and to recharge batteries. This is another way that it can help lighten the load for dismounted forces, since batteries are not light.

How do they work?

To travel directly into a warzone, MUTTs can hitch rides on aircraft like the MV-22 Osprey. Once there, they can be powered by an electric hybrid fuel cell.

How does it drive? MUTT isn’t a one trick pony. It can be operated by a remote control up to about 100 meters.

It can also obey a leash. That’s right, this robot has a sort of robot leash. Instead of relying entirely on sensors and computers to navigate, there’s a tether built into the robot to connect it to its human.

MUTT’s master takes the tether and can attach it to his or her belt, rucksack or wherever is convenient. By hooking it up, the tether becomes hands-free, which is very important for ensuring that soldiers’ hands are available for weapons and other tasks.

Once the tether is pulled out to two meters, MUTT will automatically begin to follow its human.

There’s also a wagon mode – think Conestoga wagons—  where a MUTT can follow vehicle tracks in front of it, or reverse and follow its own tracks to its last rally point – all by itself.

Or you can instruct them to be a convoy. You can link them up and the MUTTs will follow each other as a convoy.

Last month, MUTTs were part of the US Army Pacific Manned-Unmanned Initiative that tested new advances in robotics to see how they integrated into missions. The 25th Infantry Division put various tech including the MUTT through its paces.

Also a few weeks ago, the Marine Corps included MUTTs in an exercise in California to try out new gear in consideration for potential future use. Next week, MUTTs will be making a guest appearance at the Marine Corps Base Quantico, Virginia at an event where more Marines can check out the MUTTs.