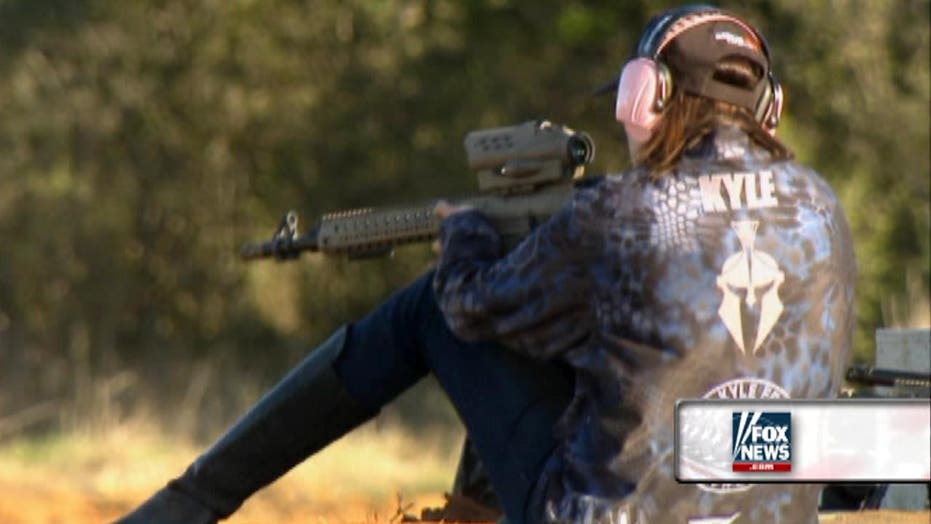 Widow of 'American Sniper' Chris Kyle, on going head-to-head with World Champion Bruce Piatt with the help of a TrackingPoint Precision Guided Firearm

What’s the secret behind a novice outshooting an NRA world champion? American Sniper widow Taya Kyle told FoxNews.com how she achieved such a remarkable feat recently.

The widow of Chris Kyle, who served in U.S. Navy Seal teams, was a professional sniper and is familiar to many from his book ‘American Sniper,’ describes herself as “absolutely a novice marksman.”

And she scored 100 percent of her shots, outshooting the champ.

Credit for her victory goes to the firearms she chose, according to Kyle. She shot with TrackingPoint’s precision-guided M600, M800 and XS1 firearms while Piatt shot with military-grade rifles currently in use with U.S. forces.

Chris Kyle played a key role shaping the development of TrackingPoint firearms. In 2009, TrackingPoint Founder and CEO John McHale and Kyle met and discussed the possibility of building a gun that could make a real difference in the battlespace.

Taya Kyle clarified how her husband influenced the new tech. “McHale had talked to Chris before he was killed about what goes into making a shot at such long distances with such precision,” she told FoxNews.com. “Chris was talking to him about the computations, the ballistics, the earth rotation, all these things that take a lot of thought and math and sometimes time. And so John and his team at TrackingPoint just put all that into a nanosecond where technology does all the computations for you and really just need to line up the shot and take it.”

How did Taya Kyle prepare?

Max Underwood, who served as a Marine, worked with Taya Kyle on a range to help her prepare for the shootout. “Just to teach me the basic things that most people who shoot know really well – it’s breathing, it’s a certain type of hold,” she explained.

“We did prone offhand, kneeling, sitting - just all different kinds of shots,” she added. “For that, there’s no perfect one hundred percent perfect way to do that. Each shooter needs to find what really works for them. We just spent a lot of the week trying to figure out what that would be for me.”

TrackingPoint rifles allow a warfighter to be fully concealed, out of sight from an adversary, and still accurately hit targets.

Taya Kyle hit a range of shots – including these highly difficult shots – with 100 percent accuracy.

She described her experience tackling these tough shots: “There are times where our service members can take a shot while seated. And there also times where there might be a building where they have to do what is called a canted shot,” she told FoxNews.com. “There’s just a hole in the building and you have to work your rifle in in such a way so you can still get a shot off but it’s not a natural thing and you have to compute all different kinds of angles than you would the way you normally train - again the gun did that computing for me."

Kyle even nailed blind shots. She revealed how technology allowed her to make impossible shots. “I also did a blind shot where there was a hole in a wall and I could put the rifle outside and my hands outside the hole,” she said. “And I had glasses on where there’s a screen inside the glasses that can see what the scope is seeing so the only thing that's exposed were my hands on that rifle … and I could see what the scope was seeing line up the shot, find the target and take that shot without exposing any more of my body or face.”

In outshooting the NRA world champion, Taya Kyle, author of "American Wife: A Memoir of Love, War, Faith, and Renewal" raised over half a million dollars for the Chris Kyle Frog Foundation. You can follow Taya Kyle on Twitter @TayaKyle and for more on their charity be sure to check out www.chriskylefrogfoundation.org.