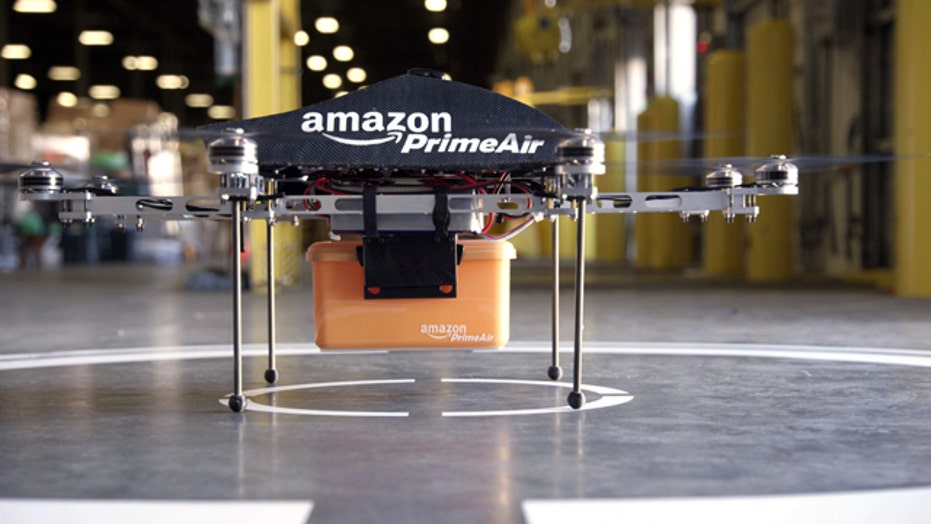 Amazon asks FAA for permission to test its delivery drones

Amazon is asking the Federal Aviation Administration permission to use drones as part of its plan to deliver packages to customers in 30 minutes or less.

The news sent shares of the nation's largest e-commerce company up nearly 6 percent on Friday.

The online retailer created a media frenzy in December when it outlined a plan on CBS' "60 Minutes" to deliver packages with self-guided aircrafts that seemed straight out of science fiction.

In a letter to the FAA dated Wednesday, Amazon said it is developing aerial vehicles as part of Amazon Prime Air. The aircraft can travel over 50 miles per hour and carry loads of up to 5 pounds. About 86 percent of Amazon's deliveries are 5 pounds or less, the company said.

"We believe customers will love it, and we are committed to making Prime Air available to customers worldwide as soon as we are permitted to do so," Amazon said in the letter.

The FAA allows hobbyists and model aircraft makers to fly drones, but commercial use is mostly banned. Amazon is asking for an exemption so it can test its drones in the U.S. The Seattle company says its drone testing will only take place over Amazon's private property, away from airports or areas with aviation activity —and not in densely populated areas or near military bases.

The FAA is slowly moving forward with guidelines on commercial drone use. Last year, Congress directed the agency to grant drones access to U.S. skies by September 2015. But the agency already has missed several key deadlines and said the process would take longer than Congress expected.

So far, two drone models — Boeing and the Insitu Group's ScanEagle, and AeroVironment's Puma — are certified to operate commercially, but only in Alaska. One is being used by BP to survey pipelines, and the other is supporting emergency response crews for oil spill monitoring and wildlife surveillance, according to the FAA.

"We're continuing to work with the FAA to meet Congress's goal of getting drones flying commercially in America safely and soon," said Paul Misener, Amazon's vice president of global public policy, in a statement. "We want to do more research and development close to home."

The FAA did not respond to a request for comment.