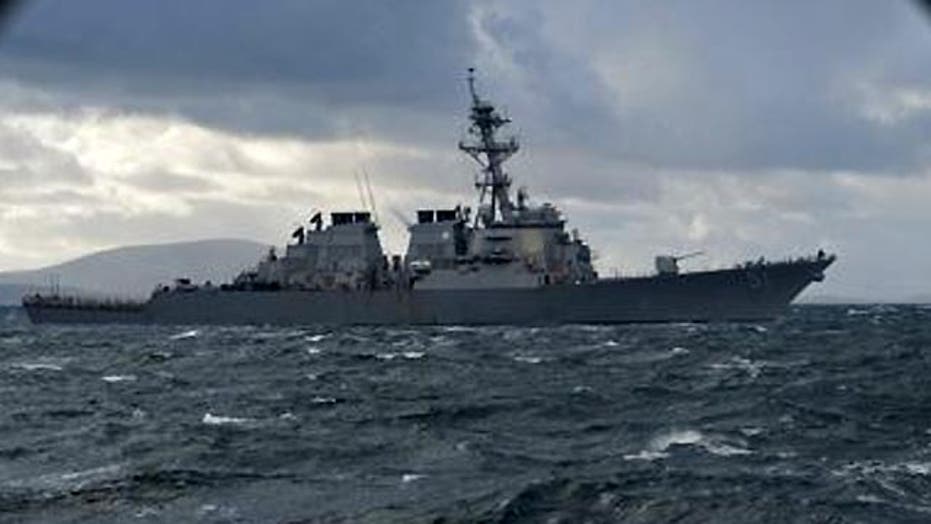 Billions spent in new destroyers for US Navy

An editor's note follows this story.

The U.S. Navy is ramping up its surface warfare capabilities, with nearly $3 billion worth of new destroyers.

On Tuesday, General Dynamics’ Bath Iron Works closed a $2.8 billion sale for four additional DDG 51 destroyers. The Navy has taken an option for a fifth destroyer -- meaning the Navy could enjoy a formidable $3.5 billion worth of new ships.

DDG 51 destroyers are Arleigh Burke-class ships, considered by many to be the most advanced surface combatant on the water today. The latest, named after Medal of Honor recipient Navy SEAL LT Michael Murphy, was commissioned last autumn in New York.

The Arleigh Burke-class is intended for a range of missions, from supporting carrier battle groups and amphibious groups through to anti-submarine warfare. It is also equipped to defend against a wide range of threats including ballistic missiles and submarines.

These robust 465-foot long destroyers are built to survive anything an enemy might throw at them, with an all-steel construction and gas turbine propulsion. Destroyers can also be equipped with missile guidance systems, advanced anti-aircraft missiles and Tomahawk missiles that can be used against enemy ships and land targets.

Named in named in honor of former Chief of Naval Operations Admiral Elmo R. "Bud" Zumwalt Jr., the DDG-1000 Zumwalt class is expected to be an even more hard-core type of destroyer designed for a range of missions -- but with a focus on land attack.

The 4,400-ton keel unit is the heavily outfitted mid-forebody section of the ship.

This ship is named for Navy SEAL Petty Officer Second Class Michael Monsoor who was killed in Ramadi, Iraq in 2006. When the Medal of Honor recipient was on a joint SEAL-Iraqi Army team, an insurgent threw a grenade from a rooftop. Monsoor jumped on the grenade, saving three SEAL teammates and eight Iraqi soldiers.

Intended to be truly next-generation, the sleek-looking Monsoor Zumwalt is expected to launch later this year.

Similar to Arleigh Burke-class destroyers, the DDG 1000 is designed for a range of missions, but it has a number of key new features that set it apart. For example, this destroyer is designed to support ground forces in land attack.

It is hoped the 600-foot long Zumwalt class will operate even more efficiently in shallow coastal waters and sustain missions that last for weeks.

Tasked with coastlines, the Zumwalt will need to withstand surface mines as well as small boat, submarine and cruise missile attacks, so the Navy requirements for these ships included robustness, stealth, speed and strength.

The ship uses a number of new technologies that give the Navy unprecedented advantage.

The Zumwalt's distinctive hull is a new design called a Wave-Piercing Tumblehome hull created by Northrop Grumman. This new design slopes inward from above the waterline so it can slice through waves, improving speed and maneuverability. The design also enhances the destroyer’s stealth by reducing acoustic and infrared signatures that could be detected by enemy technology.

To further improve stealth, the Zumwalt will reduce engine noise with a quiet, electric propulsion system.

The Navy planned for the DDG 1000 to be an all-electric ship, with approximately 10 times the power of the Arleigh Burke-class destroyers at 80 megawatts of electricity.

It is also hoped this new energy approach will enable speeds of 30 knots.

Kitted out with an array of weapons, Zumwalts are intended to be even more lethal with greater range and precision.

A Patriotic Tradition
Originally an iron foundry established in 1826, the Maine-based Bath Iron Works is a true American Patriotic tradition. U.S. Army Brevet General Thomas W. Hyde took over the foundry in 1865 after serving with the 20th Maine Regiment during the Civil War.

In 1890, the very first hull was built -- and for more than a century, Bath Iron Works has continued to regularly build vessels for the Navy.

Due to an editing error, an earlier version of this story referred to Medal of Honor winners. The Medals of Honor were awarded posthumously.