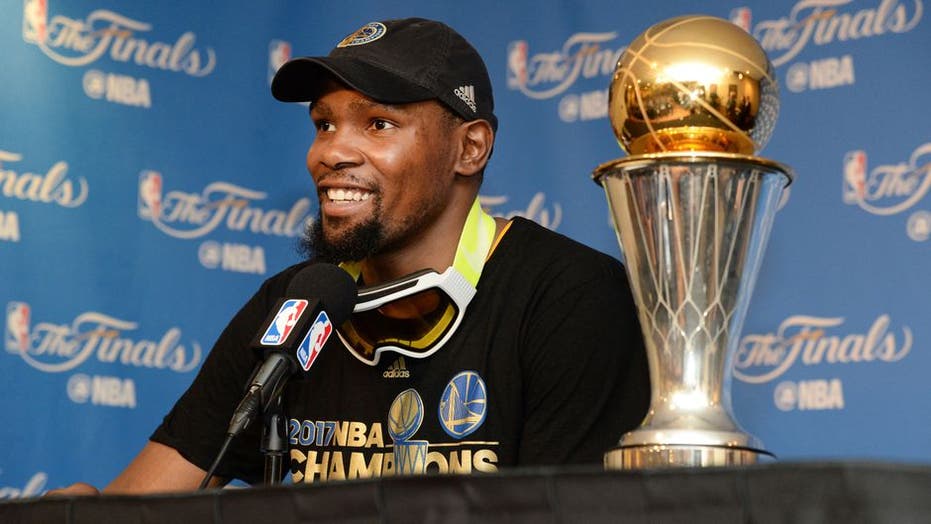 Golden State general manager Bob Myers plans to meet with both Kevin Durant and Klay Thompson ahead of the start of free agency this weekend.

"Yes," Myers answered succinctly Monday when asked about sit-downs with both free agents, each injured for the runner-up Warriors during the NBA Finals and expected to miss at least most of next season.

Is Myers optimistic about having productive conversations with the two stars?

And that was all on that Monday, when the Warriors formally introduced their three draft picks.

Though Myers did say he expects Thompson to have surgery this week after he tore the torn anterior cruciate ligament in his left knee during Game 6, which the Warriors lost at home as the Raptors clinched the franchise's first championship. Durant was injured in the previous game at Toronto and underwent surgery for a ruptured right Achilles tendon that could keep him out for the majority of the 2019-20 season.

Myers and coach Steve Kerr have made it clear they would like to keep Durant but are prepared for the waiting game as the two-time finals MVP makes his decision.

He signed a two-year contract last summer that includes a player option for next season, so Durant can become a free agent to pursue a maximum five-year deal. Thompson also is likely to command a max contract.

Top draft pick Jordan Poole hasn't heard a peep from Draymond Green yet, though Green reached out to Myers on draft night last Thursday to get Poole's number. The new shooting guard out of Michigan knows some good-natured banter is coming from the NBA veteran from Michigan State.

And Poole will wait to see what Green does before deciding how he might respond.

"I would watch a lot of the videos in college about Michigan State and how he said he'll hate Michigan forever," Poole said. "Being able just to see that he gave me the approval that he gave Bob Myers, 'I really like this kid,' and I walked in the locker room today to put my shoes and stuff in there and he's my locker buddy. It's just amazing. I'm excited to meet him. Obviously there's going to be a lot of fun activity going on with him. He hasn't hit me yet (with a text). He has my number. I feel like it's something coming soon, though. I'll kind of just play it out, kind of ride the wave and see where it goes."