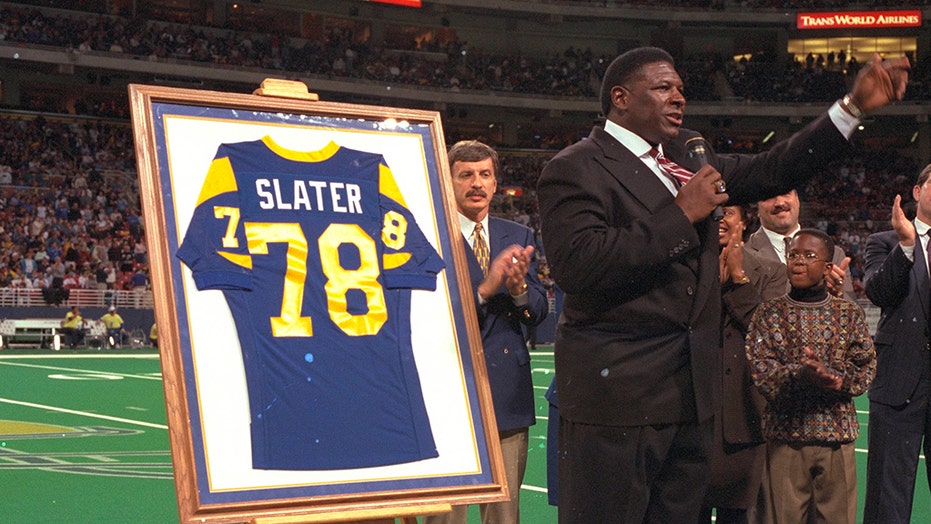 Hall of Fame offensive lineman Jackie Slater was fortunate enough to block for two of the greatest running backs in the history of the National Football League.

Slater, a third-round pick of the Los Angeles Rams in the 1976 NFL Draft, was selected to seven Pro Bowls and broke a record for most seasons with one team. His No. 78 jersey was retired, and he was inducted to the Pro Football Hall of Fame in 2001.

But before suiting up for the Rams and having the luxury of blocking for Hall of Fame running back Eric Dickerson, Slater was teammates with Chicago Bears legend and Hall of Famer Walter Payton at Jackson State University.

JACKIE SLATER, PRO FOOTBALL HALL OF FAMER, ON HOW CORONAVIRUS HAS CHANGED HIS DAILY ROUTINE

Offensive tackle Jackie Slater of the Los Angeles Rams sits on the bench during a game at Anaheim Stadium in Anaheim, California. Slater played for the Rams from 1976-95. (Photo by Andrew D. Bernstein/Getty Images)

Slater told Fox News on Thursday that Payton was a “very unique and a very rare athlete and competitor.”

One of the first things Slater remembers about Payton was prior to a meeting during his freshman year at Jackson State. Slater said that players were standing around and wasting time before a meeting, and Payton got on his hands with his feet above his head, and he walked down the aisle, across the front of the auditorium, and back around on his hands, before he went to his feet. Slater said that he’s never seen an athlete do anything like that.

“Walter Payton had a calcium deposit on his left elbow, and they drained about 60 ccs of fluid from him about once a week during his junior and senior years,” Slater recalled. “And he never missed a practice, never missed a game, and he was getting tackled hard. There was no such thing as going over and two-hand touching him. He was struck by some solid hitting linebackers, and he was taken to the ground. And I saw him go through that and deal with that for the three years that I played with him.

Chicago Bears Hall of fame running back Walter Payton during filming of the Super Bowl Shuffle in Chicago, Illinois in 1985. (Photo by Paul Natkin/Getty Images)

“And so when I got to the pros, and I was in my second year, and Walter was in his third, and he was tearing it up. The guys came over to me and they said, ‘Are you surprised that your old college teammate is doing as well as he’s doing?’ and I said, ‘No, I would be surprised if he wasn’t doing what he’s doing,’” Slater said. “I watched that man practice for three years, and I never saw anything like that. I just kind of took it for granted that this is what running backs do. And then we’d get in the game, and he’d score touchdowns, and make plays across great individual effort linebackers and defensive backs. You just knew that he was different.”

In 1983, the Rams drafted Dickerson with the No. 2 overall pick of the draft. Slater was going into his eighth NFL season, and he never made a Pro Bowl or did anything to justify a Hall of Fame resume.

“Eric came in, and he watched the way I worked, and he said, ‘You haven’t been to a Pro Bowl?’ And I said, ‘No I haven’t.’ And he said, ‘Well, you’re going this year,’” Slater said. “Well, 30-something years later, his rookie rushing record still stands, and I did go to my first Pro Bowl that year.”

One day when Slater was at the Pro Bowl, Dickerson and Payton both approached him from behind. Dickerson sat by his right hand, and said, ‘Jackie, who’s the best running back you’ve ever blocked for?’ At that time, Payton peeked his head over Slater’s left shoulder, and he noticed him right away. All Slater could do was lean back and pointed at both of them.

When asked who was the better running back, Slater already has a response ready.