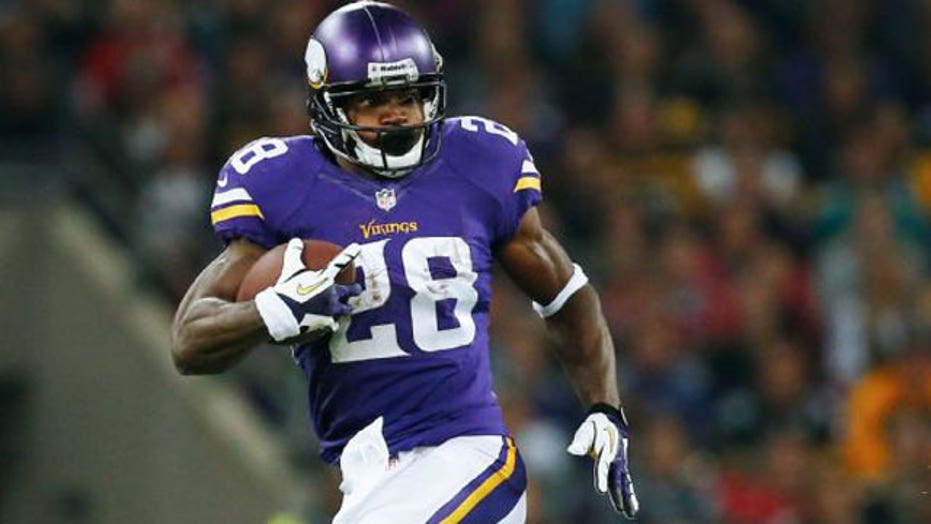 Vikings star out until child abuse case is resolved

The Oregon-based shoemaker released a statement Wednesday, saying Nike "in no way condones" child abuse of domestic violence of any kind, adding that it had shared those concerns with league officials.

"We have suspended our contract with Adrian Peterson," the statement concluded.

Earlier Wednesday, the Minnesota Vikings issued a statement saying that Peterson must remain away from all team activities until his felony child abuse case is settled. Vikings owner Zygi Wilf later told reporters during a press conference that the team "made a mistake" in bringing back Peterson following his indictment on a felony child-abuse charge in Texas.

"We made a mistake and we needed to get this right," Wilf said. "It is important to always listen to the fans, the community and our sponsors."

The Vikings benched Peterson for last Sunday's loss to New England before announcing the following day that they would bring back, causing the suspension of at least one sponsorship. Several NFL advertisers, including Anheuser-Busch, have also expressed concern about the league's recent off-the-field problems.

Hall of Fame Vikings quarterback Fran Tarkenton told Fox News.com that he was "embarrassed" by the team's decision to reinstate Peterson.

"These are serious accusations, Tarkenton said. "And the only way you’re going to get the attention of an NFL player is to take away his paycheck and take him off the field. This is way above winning or losing a football game."

Peterson was indicted after using a wooden switch to spank his 4-year-old son earlier this year. He has said he didn't intend to the child. General manager Rick Spielman says he doesn't know how long the case will take and "until these legal matters are resolved" he will remain away from the team.

Peterson has an initial hearing scheduled for Oct. 8 in Montgomery County, Texas. He has told police that he was merely inflicting discipline and had not intended to hurt the boy.

"This is the best possible outcome given the circumstances," Peterson's agent, Ben Dogra, told The Associated Press. "Adrian understands the gravity of the situation and this enables him to take care of his personal situation. We fully support Adrian and he looks forward to watching his teammates and coaches being successful during his absence."

On Tuesday, a Houston television station reported that the mother of another Peterson's children filed abuse allegations with the state's Child Protective Services agency last year, claiming that Peterson had left a head wound while striking her son.

Fox News' Joshua Rhett Miller and The Associated Press contributed to this report.