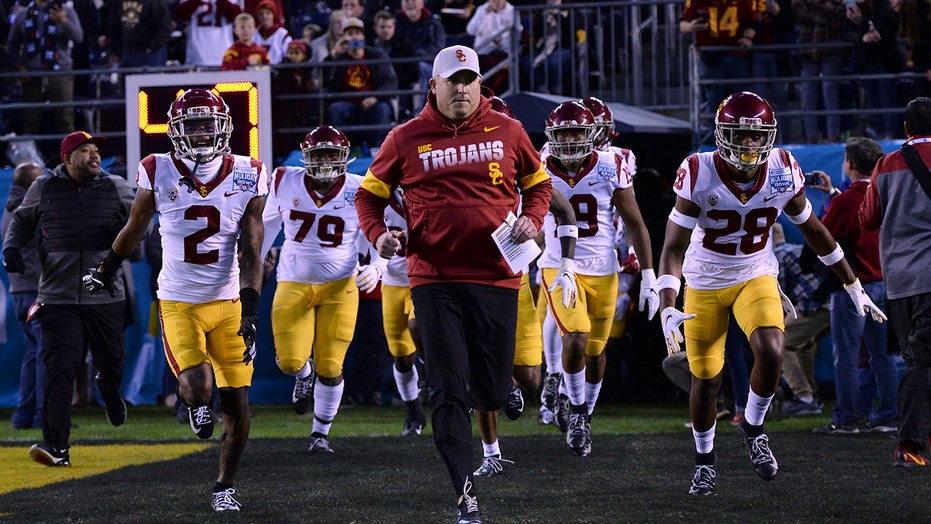 Mike Bohn took over as athletic director at Southern California on Nov. 7. His first major assignment was to assess the state of the football program and determine whether Clay Helton would continue to be the Trojans' head coach.

He had about two weeks to make a decision that could potentially cost USC tens of millions of dollars, regardless of which way it went.

Instead of changing head coaches, USC's new leadership team of Bohn and President Carol Folt chose to upgrade around Helton — from assistant coaches to tighten up a chronically leaky defense and special teams to graphic designers to bring the program's recruiting apparatus into the 21st century.

USC considers itself to be among college football's elites, a peer to perennial playoff participants Alabama, Clemson, Ohio State and Oklahoma. Historically, yes. Recently, no.

This is setting up to be another season of speculation and weekly status reports on the head coach at USC. If the results don't improve there will be no one left to blame but Helton.

“I look at it right now as that I've been given a gift of having the things needed for us to be successful," Helton told the AP in a recent phone interview. "Now, I put a lot of pressure on myself and our coaching staff. When you're given the things that we've been given this offseason we need to produce the results. And that's me saying that, not anybody else. That's the standard that I've set for myself and for our staff."

Helton is 40-22 in four full seasons as USC coach. The Trojans went 21-6, with a Pac-12 title and Rose Bowl victory the first two seasons after he was elevated from interim to bring stability and professionalism to a program that was lacking both. The last two seasons, USC is 13-12 under Helton. It's never a good sign when the school has to announce after the season that the coach is NOT being fired, but USC has done that each of the last two years. Both times it has been at least a little surprising. Especially last year, when the temperature of Helton's seat was being taken almost daily.

“Well, you know, I wasn't surprised because I felt the support not only by Mike, but also by Dr. Carol Folt,” Helton said. “From day one what Mike said was, 'Coach, I'm here to help you. I'm here to help you be successful. Every day that I'm here, that's what I'm going to do.'"

Folt was hired away from the University of North Carolina at a time when USC had been dealing with multiple campus-wide crises, including sexual abuse allegations against a school doctor. USC has also been at the center of the college admissions scandal.

An underperforming football program is not something to be taken lightly at USC, but Folt had bigger issues to attend to — including hiring a new athletic director during the season to take charge of that problem.

It took a while for USC to find someone with previous experience as a Power Five AD to take the job. Bohn, 59, came over from Cincinnati. He has also done stints at Idaho, San Diego State and nine years at Colorado.

Bohn had little time to evaluate the state of the program and was facing the prospect of paying Helton about a $20 million buyout, plus another $25 million (conservatively) to a replacement. Bohn determined a lack of continuity was at least partly to blame for USC's slippage since the Pete Carroll-led dynasty of the 2000s.

Helton is USC's third coach, not including an interim stint by Ed Orgeron, since 2009. Each of the previous two — Lane Kiffin and Steve Sarkisian — were fired midseason.

Bohn decided what was holding back USC went beyond the head coach's office. These days the best programs have personnel and recruiting departments stocked with talent evaluators to identify the best players and content creators and brand builders tasked with getting the school's message in front of those players.

“So we've invested double in the total resources associated with our recruiting operation,” Bohn said during an interview in his Heritage Hall office in late January. “We were woefully behind those that are reaching the goals that we aspire to reach.”

“So I want to be clear," Bohn said. "I'm not insinuating we don't have the resources. The resources were not invested in the football program at a level that we recognized needs to be implemented in order for us to compete for championships.”

On the field, Helton hired five new coaches from outside the program, promoted another from within, and retained offensive coordinator Graham Harrell, who was pursued by Texas and NFL teams.

Harrell and his Air Raid helped USC have a top-15 offense last year, despite starting three quarterbacks. The upside of the quarterback injuries was the emergence of freshman Kedon Slovis. Slovis took over after J.T. Daniels was injured in Game 1, had his own injury issues, but all things considered looked like a budding star. Slovis completed 71% of his passes for 3,502 yards, with 30 touchdowns and nine interceptions.

The hope is that defensive coordinator Todd Orlando and three other newly hired assistants will do for a defense that ranked 70th in the nation what Harrell did for the offense.

Helton and Bohn believe they have bought low on Orlando. Just a few years ago he was being mentioned for head coaching jobs after successful seasons at Houston and Texas as defensive coordinator for Tom Herman.

The Longhorns' defense collapsed last year and Orlando was jettisoned as part of Herman's staff makeover. Orlando briefly landed at Texas Tech before Helton scooped him up.

Craig Naivar, who was at Texas with Orlando, is USC's new safeties coach.

Helton lured defensive line coach Vic So’oto away from Virginia, special teams coordinator Sean Snyder from Kansas State and, in maybe the most notable addition, LA-area native Donte Williams from rival Oregon to coach cornerbacks. Williams is credited with helping the Ducks establish a recruiting pipeline from SoCal to Eugene that has helped Oregon sign the top-rated class in the Pac-12 the last two seasons.

“Why would Graham Harrell stay if he didn't believe in what we're doing?" Helton said. "Why does a Donte Williams leave a Rose Bowl champion Oregon to come here to USC? Why does Vic So'oto, who has been raised by (Virginia coach) Bronco Mendenhall, I mean, that's as close to a son as (Mendenhall's) got, leave his mentor to come here? There's something special that is going on here. We all feel it as coaches.”

Assistant coaches in big-time college football know their career paths are often determined by the head coaches they choose to work with. The new guys expressed confidence they weren't boarding a sinking ship.

“Clay Helton to his credit was the guy who kind of tipped us over as far as a boss that you can get behind and fight for,” So’oto told reporters recently.

Slovis said the players are ready to Fight On for Helton, too.

“You know, coach can't throw any touchdowns or block anyone or catch the ball or make tackles, you know?” Slovis said. “We know there's a lot of pressure on him. But at the end of the day, it's up to us, the players, to execute.”

Bohn has shown nothing but enthusiastic support for Helton. The same can't be said of a lot of USC fans and supporters. Giving it another go with Helton could cost USC at the box office and in donor support, especially if things go sideways early in the 2020 season.

Oh, by the way, USC opens against Alabama in Arlington, Texas. The last time they played was the 2016 opener and the Crimson Tide won 52-6.

USC will find out if the moves made to bolster Helton unlock the program's untapped potential under his leadership, or if Bohn's plan to build around the coach simply delayed the inevitable.

If it's the latter, USC could still benefit by having shown potential replacements the new administration is prepared to do what it takes to give a coach — whomever that may be — the support necessary to compete at the highest level.

But first Helton gets a crack at it.

“The expectations moving forward are very clear,” Bohn said. “And he understands that and he is embracing them like we all are. I want to be clear that we are not accepting the current state of the program. We want to play in the Rose Bowl and we want to play for the national championship. So we're going to make the right investments to compete to do that. So the frustrations that some of our people continue to have are shared by everybody in this building.”