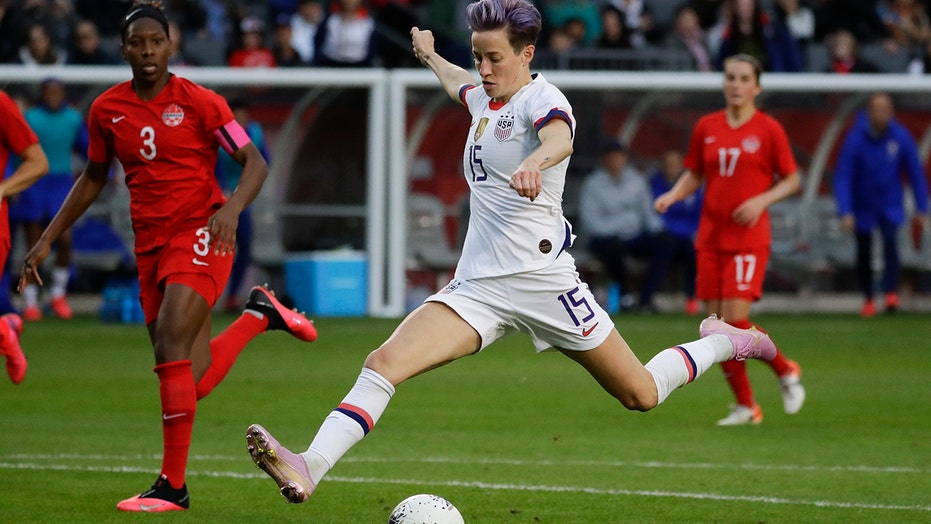 Lynn Williams and the rest of the U.S. women sensed it was just a matter of time before they wore down Canada.

Williams broke open a scoreless stalemate with a goal in the 61st minute and the United States beat Canada 3-0 on Sunday in the title match of the CONCACAF Women’s Olympic qualifying tournament.

“We have a great front line, we have a great midfield. The defenders were doing their job in the first half, so now it was our turn to get the job done in the second half,” Williams said.

Lindsey Horan and Megan Rapinoe also scored for the United States, which extended its undefeated streak to 28 games. The U.S. did not concede a goal in five qualifying matches, and scored 25 times.

The U.S. and Canada had both already secured the region's two spots in the Tokyo Games with victories in the semifinals. The United States, ranked No. 1 in the world, beat Mexico 4-0 in one semifinal and eighth-ranked Canada edged Costa Rica in the other game on Friday.

The U.S. has been to every Olympics since women’s soccer was included in 1996, and has won four gold medals. But the Americans were knocked out in the quarterfinals by Sweden four years ago in Brazil, the team’s earliest Olympic exit.

Canada has made the field in the past three Olympics, winning the bronze medal in the last two.

It was the fourth time the teams have met in the final of the region's qualifying tournament, with the United States winning all four.

“In the first half, throughout the whole game, they were very organized, very disciplined. They're one of the best teams in the world, top 10 in the world, so it's not going to be easy, if you sit back it will be really hard,” U.S. coach Vlatko Andonovski said. “I think in the first half we weren't patient enough and not sharp enough. But I think in the second half we came out with a little bit more energy, we moved the ball a little faster, which ultimately resulted in a goal.”

Andonovski started Williams and Jessica McDonald, giving Tobin Heath the day off. Rapinoe came in as a substitute. Other veterans on the bench for the match included defenders Becky Sauerbrunn and Kelley O’Hara.

Julie Ertz wore the captain’s armband for her 99th appearance with the team. Christen Press started and her streak of scoring in six straight games ended. Press was the fifth U.S. woman with a scoring streak at least that long, joining Mia Hamm, Michelle Akers, April Heinrichs and Carli Lloyd. It was the longest such streak for the U.S. since Lloyd scored in seven straight in 2014.

And despite the defensive stand, Canada did have its opportunities. Jessie Fleming, a standout at UCLA, had an attempt that went over the goal and into the netting.

Press’ blast in the 32nd minute hit the crossbar. A few moments later, she caught Canada goalkeeper Stephanie Labbe far out in front of her net, but the attempt from distance sailed over the goal.

Christine Sinclair’s attempt on a breakaway in the 38th minute was stopped by U.S. goalkeeper Alyssa Naeher.

Williams finally broke through Canada's defense with a blast into the upper corner for a 1-0 lead. Horan doubled it 10 minutes later when she dribbled around two defenders and finished with a perfectly placed shot that Labbe couldn’t reach.

After her late goal, Rapinoe struck her victory pose with both arms raised toward the crowd, a move made famous last summer when the United States won the World Cup.

“I actually don't think they did too much to adjust. We made three individual mistakes, and gave them three goals,” Sinclair said. “I thought we played a pretty even first half, obviously they dominated possession. But against a team like that, you can't give them goals, and we did that tonight.”

Both teams went undefeated in the run-up to the final match, with Canada scoring 23 goals and the United States scoring 22.

Canada has won just three times in the 60-match series against its North American rival.

Attendance was announced at 17,489 at Dignity Health Sports Park, home of the LA Galaxy. The United States hasn’t lost on home soil since July 2017.